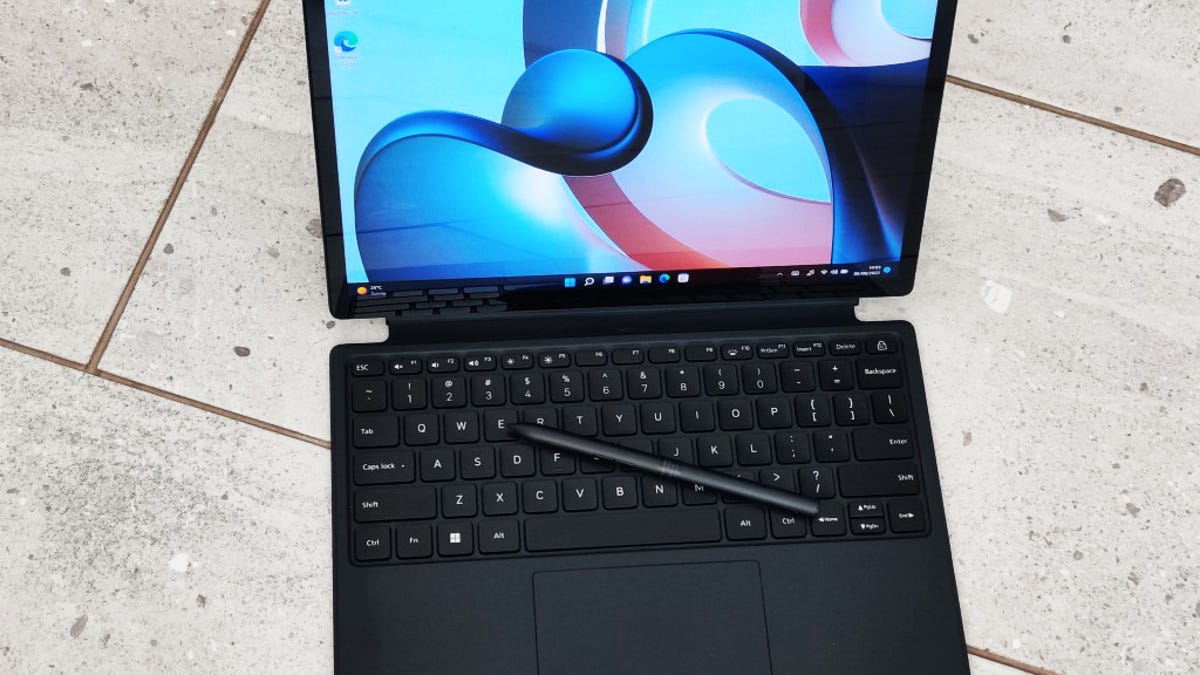 Xiaomi is best known for its mobile phones in the UK, but the Chinese company also sells a range of other devices including smart speakers, home security kit, wearables and earbuds. Its portfolio now includes the Xiaomi Book S 12.4-inch tablet, which costs £599.99 in the UK (reduced from £649.99). There are also two optional extras: the £129 Xiaomi Book S 12.4-inch Keyboard, which turns it into a 2-in-1 detachable, and the £89.99 Xiaomi Smart Pen. We had all three components for review, bringing the total price tag to £818.98.

Powered by Qualcomm’s Arm-based Snapdragon 8cx Gen 2 SoC and supplied for review with both keyboard and stylus, the Xiaomi Book S 12.4-inch ships with Windows 11 in S mode. It’s not for anyone looking for a powerhouse computer, but how does it stack up as a 2-in-1 detachable for everyday use?

This is a three-piece detachable 2-in 1, with separate tablet, keyboard and kickstand. The 12.4-inch tablet weighs 720g, while the keyboard weighs 317g.

It’s important to note that the Xiaomi Book S 12.4 runs Windows 11 in S mode, which Microsoft says is “streamlined for security and performance, while providing a familiar Windows experience”. S mode only allows users to download apps from the Microsoft store, and the only browser allowed is Microsoft Edge. You can switch away from S mode, but can’t switch back again. I stayed in S mode for the duration of this review in order to keep continuity with the Xiaomi Book S 12.4-inch as shipped to users. However, this meant I did not have access to some apps — most notably the Geekbench 5 benchmark app.

The tablet’s casing is plastic over an aluminium magnesium alloy body, and while it feels quite robust, it might be advisable to use a protective sleeve when you’re travelling – especially as the screen only has Gorilla Glass 3.

The kickstand adheres magnetically to the tablet’s back quite securely, and the keyboard section also has a solid magnetic connection. I certainly never felt that things would come apart in transit. However, as with all devices of this type, working on a lap or any surface that’s not firm is impossible. There is no lift mechanism for the keyboard either, so if you prefer a raised typing angle you’ll be disappointed.

The optional Xiaomi Book S 12.4-inch Keyboard is comfortable to use. The keys are large, with plenty of travel, and have a pretty good action for a keyboard of this type. They emit only a slight dull ‘thunk’ in use. The QWERTY and character keys all have a slight indent, but the Fn row and other ‘function related’ keys such as tab, caps lock, shift, backspace and enter, as well as all of the bottom row, are flat. Visually the appearance is somewhat disjointed, but it didn’t make any difference to typing for me, and I managed to work at close to my normal touch-typing speed.

The touch screen is easy to work with, and Xiaomi also provides an optional Smart Pen stylus that attaches to the left short edge with strong magnets, charging wirelessly when in this location. There’s no permanent housing for the stylus on the chassis, though, so you’ll need to take care not to mislay it.

Ports and connectors are all on the tablet. One short edge has a volume rocker, a power switch, a 3.5mm headset jack, a USB-C port, a MicroSD card slot and one of the two speaker grilles. The other grille is on the other short edge. It’s good to see a 1080p webcam here for video calls, while the rear camera is a 13MP unit. There’s no fingerprint sensor, but Windows Hello face authentication is available via the webcam in addition to a Windows password or PIN.

Audio output from the speakers is of reasonable quality and volume. They’re perfectly adequate for general listening, although bass tones aren’t as strong as they could be.

The Snapdragon 8cx Gen 2 chipset is supported by 8GB of RAM. It handled the tasks I threw at it — streaming content through a couple of browser windows and writing into web apps – well enough, but these are low-level workloads. As noted earlier I didn’t run Geekbench 5 to see how the Xiaomi Book S compares with other tablets because this wasn’t available in the Windows app store. Looking at the Geekbench browser, single-core scores are around 750 while multi-core scores are around 2900. This is, not surprisingly, in the same ballpark as HP’s Elite Folio, which uses the same chipset.

There is 256GB of internal storage, which ought to be enough for everyday use cases, and more can be added via the MicroSD card slot.

Xiaomi quotes up to 13.4 hours of life from the battery and provides a 65W charger. To test this, I worked for three hours from a fully charged battery. After three hours there was 61% charge remaining, suggesting total battery life of about 7.7 hours.

The Xiaomi Book S 12.4-inch is compact and well made. The keyboard is comfortable to use (although its angle can’t be raised) and the screen offers plenty of brightness. The 1080p webcam is good, and there’s a MicroSD card slot for storage expansion. Windows S mode is installed out of the box, but a one-way trip out of this restrictive mode is possible for free (there’s no way back to S mode afterwards, though).

Downsides include ageing Gorilla Glass 3 screen protection, a chipset offering modest performance, the lack of an on-board housing for the stylus, a shortage of ports and connectors, and no support for mobile broadband.

The Xiaomi Book S 12.4 may suit undemanding users, but the small screen and basic specifications mean it’s not sufficiently powerful to be your main work device.

The Xiaomi Book S 12.4-inch looks well priced at £818.98 for the tablet, keyboard and stylus compared to its main Windows on Arm competition. Microsoft’s 13-inch Surface Pro X with SQ1 chipset, 8GB RAM and 256GB of SSD storage, plus a Surface Pro Keyboard and Surface Slim Pen 2 stylus comes to £1,047.99, while HP’s similarly specified 13.5-inch Elite Folio will set you back £1,438.60 at the time of writing. If you’re happy to look outside the Windows ecosystem, you can pick up a 10.2-inch Apple iPad with Apple Pencil and Smart Keyboard for £707.

The 5 best tablets for kids: Not just for entertainment

The 5 best drawing tablets: Top picks for artists and designers

The best 2-in-1 laptops: Top flexible, hybrid, and convertible notebooks

Cat changes her habits for dog sibling after he starts losing his sight. Watch

Move over Xbox, Sony wants to put ads in PlayStation games, too

Tamannaah: Predominant work in South cinema hasn’t stopped me from reaching out to entire country