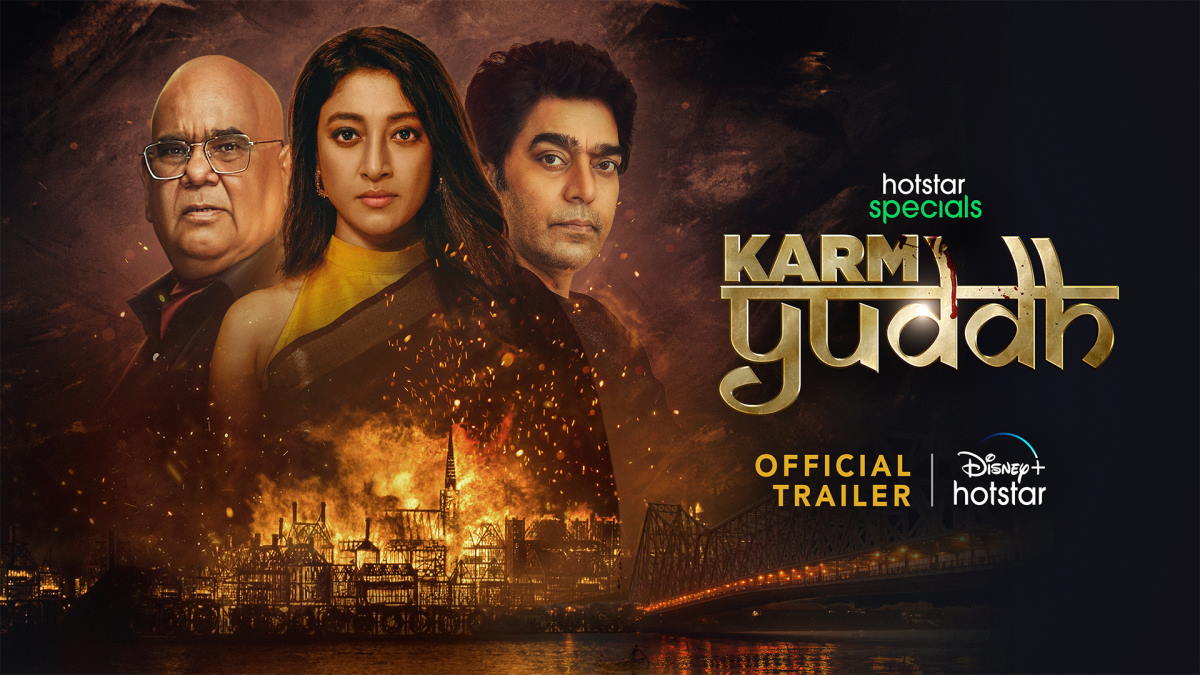 Karm Yuddh, a new Hotstar Specials series, just got a trailer and release date. Disney+ Hotstar unveiled the trailer for the upcoming Paoli Dam-led drama thriller series, which will premiere September 30. Following a deadly fire incident at the Roy Group of Industries, Karm Yuddh looks at a succession crisis within the wealthy family, turning Kolkata into a “bloody battleground.” The eight-episode series is directed by Ravi Adhikari, who co-produced it with his brother Kailashnath Adhikari.

The trailer for Karm Yuddh begins with a voiceover, detailing how rich family relationships work, all the while a group of armed bandits set fire to the Roy Industries. “Maths might teach us that 1 and 1 together stand for 11. But as far as family is concerned, 1 and 1 translates to one,” the unseen narrator says. The Karm Yuddh trailer then cuts to the aftermath, as the police make their way into the blackened remains of the factory. It is revealed that the culprits killed all the workers before setting the property into flames, indicating that it was committed by someone with a deep grudge.

The eldest son Bhisham Roy (Satish Kaushik) — who seems to be in charge of the company — begins taking some heat, as people question his relationship with Indrani Roy (Dam). “Rumour has it there is a feud amongst the two Roys,” an unnamed investor says in the Karm Yuddh trailer.

The Karm Yuddh trailer then cuts to show Indrani, who maintains a serene, well-adjusted appearance in the public eye, whilst constantly arguing with her brother-in-law at home. “Is it really a relationship if there are no fights?” she asks. The Karm Yuddh trailer, which is quite vague on the plot details, seems to indicate an ongoing power struggle within the family, now that people have lost confidence in the leading Roy.

The Karm Yuddh trailer then introduces the final key member of the Roy family — Guru Shastri (Ashutosh Rana), who is described as the illegitimate son of the late Yash Roy. It’s not clear what the trailer is trying to hint at here, as we see him conspiring an assault plan with local college students. “Now she will realise that the wind can change directions and incinerate her instead,” he says. Is this supposed to be a precursor to the fire incident or just “clever” wordplay for events yet to come?

Apart from the erratic editing, there are also points in the Karm Yuddh trailer where the subtitles don’t match the dialogues. Specifically, when Indrani’s party-loving stepson Abhimanyu (Ankit Bisht) is introduced. While the voiceover indicates that she loves him as her own blood child, the subtitles imply some incestual attraction.

Karm Yuddh premieres September 30 on Disney+ Hotstar wherever available. Hotstar Specials are available on Hulu in the US. All eight episodes will be available on day one, as is usually the case.