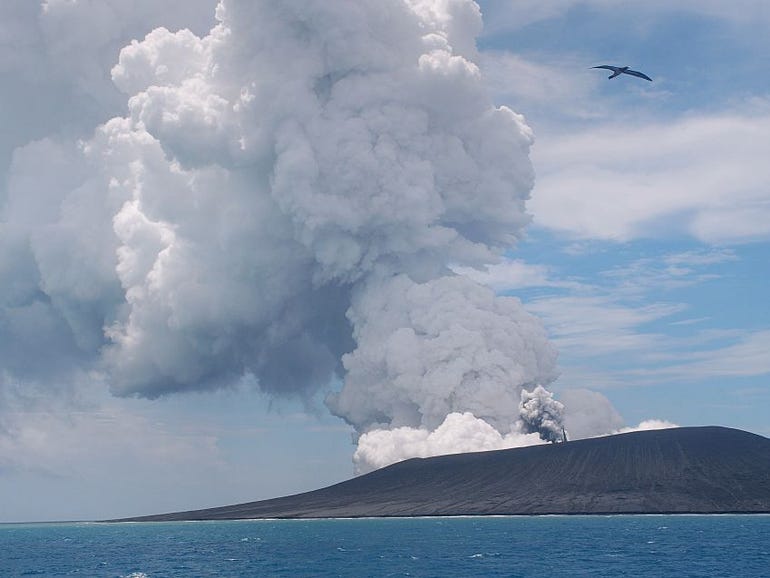 On Saturday, the volcano at Hunga Tonga-Hunga Ha’apai erupted, sending ash plumes 30 kilometres into the atmosphere, kicking off a tsunami in Tonga that reached as far away as Alaska, and destroying a volcanic cone that connected the uninhabited islands of Hunga Tonga and Hunga Ha’apai.

The volcano is around 65 kilometres northwest of Tongan capital, Nuku’alofa, with experts saying it was one of the most powerful eruptions since the 1990s.

“The sea level gauge at Nuku’alofa, Tonga, recorded a tsunami wave of 1.19 metres before it stopped reporting,” Dr Hannah Power of the University of Newcastle said.

“Waves of over a metre were also observed in Vanuatu and Norfolk Island, Australia, and as far afield as Chile. Waves of over 50 centimetres were measured in several locations in New South Wales, Queensland, Fiji, the Cook Islands, New Caledonia, and New Zealand. Across the Pacific, tsunami waves were observed along both the North and South American coastlines and in Japan.

“Before communications were lost, video reports showed significant tsunami wave flooding and inundation occurring in Tonga which has caused damage to roads, buildings, and infrastructure such as seawalls. Flooding and localised inundation have been reported in Fiji, Chile, Ecuador, and the USA.”

As part of the damage, Tonga’s subsea cable connectivity to the outside world was also cut.

“TCL staff and all the stations are fine (no damage) except the cables, both have a fault,” Tonga Cable Limited said.

The company added the information required for the repair was gathered, and preparations to send a repair ship would begin as soon as clearance was granted, particularly as the eruption was close by the repair site.

Southern Cross Cables said the Tonga Cable went into single end feed mode, which meant it was being powered from its landing site in Fiji, but not from the Tongan side.

“This may have been due to failure of the Tonga power source, and so initially it was unclear whether the cable had failed/broken or whether it was a failure of the power equipment,” Southern Cross said.

“TCL are currently liaising with Subcom (South Pacific cable ship maintenance authority) with regards to arranging for the repair.”

The 827 kilometres submarine cable between Tonga and Fiji connects to the Southern Cross Cable. It went live in August 2013, and was funded jointly by the Asian Development Bank and the World Bank.

Digicel, which operates a mobile network in the nation, said its service was impacted by the tsunami hitting Tonga’s main island, Tongatapu.

“Currently all communication to the outside world in Tonga is affected due to damage on the Tonga Cable Limited submarine cable, as a result of the volcanic eruption in Hunga Ha’apai Island,” Digicel said.

“CEO of Digicel Tonga, Anthony Seuseu and his team are working with local authorities to resolve the damage caused as a matter of urgency. We are working on getting our satellite link connectivity and this will be available to limited customers in essential services and government.”

Digicel added its domestic mobile towers were “in operation” across Tongatapu.

In 2019 after the Tonga cable suffered a pair of cuts and a 12-day outage, the nation signed a 15-year deal with Kacific for satellite connectivity.

Kacific has yet to respond to a request for comment, but the NZ Herald is reporting that dust and ash clouds are making satellite service intermittent, and the repair ship is currently in Papua New Guinea.