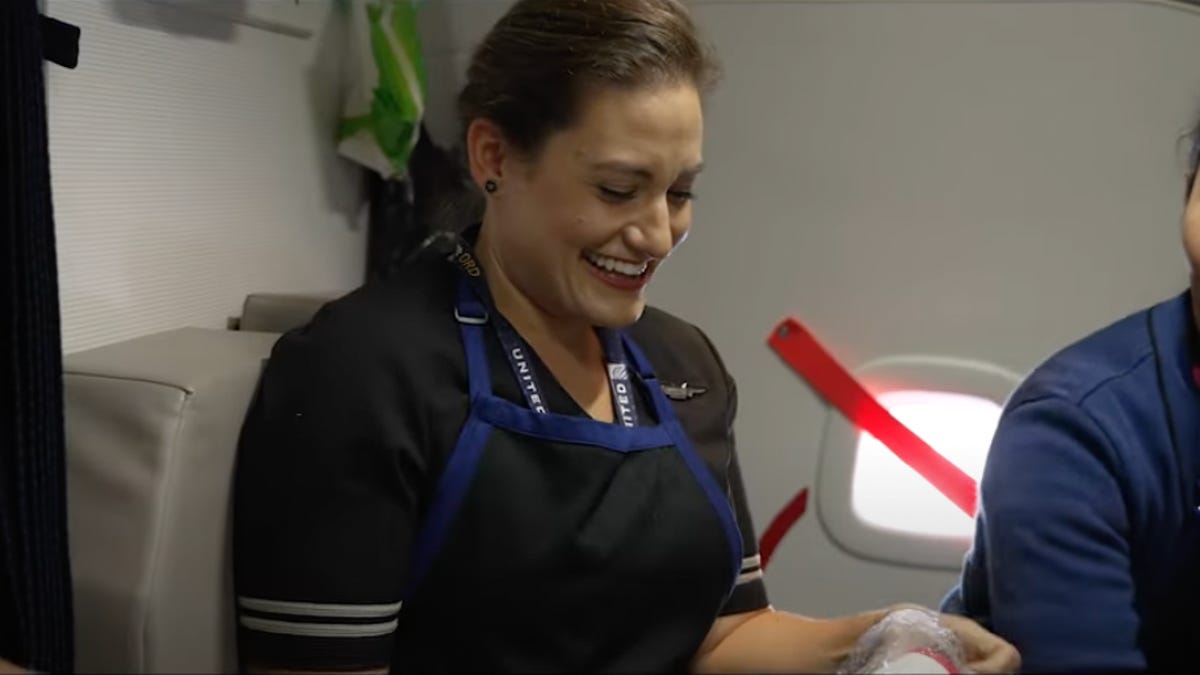 All over America, employee relations are sinking to the level of The Office.

While bosses crow about their management skills, and their extraordinary feats in making even more money, employees gnarl resentfully. And virtually.

In many industries, they realize that bosses have used the pandemic to reduce workforces and leave customers severely dissatisfied.

Yes, of course, I’m talking about airlines. The only industry that would try to make Oliver Twist ashamed of his greed.

Now United Airlines flight attendants have found an equally cutting, if not even more delicious idea.

Their union, the Association of Flight Attendants, have decided to do what bosses ask customers to do to bosses.

No, not go online to rail at how useless they are. Well, not exactly. Instead, they’re launching something called the Flight Attendant Promoter Score.

Many companies use the so-called Net Promoter Score to crow about their customer service. If it’s a good score, that is.

It’s the measure derived from the little survey question you’re asked after a flight: “How likely are you to recommend the airline to your friends, family and random people you meet in bars on a Friday night?”

So now United’s flight attendants will score the airline. Every single week. It’s a little like a rolling Glassdoor that everyone can see, one that offers a (hopefully) honest reflection of how utterly peeved flight attendants are with their management.

Says the flight attendants union: “It’s just common sense that in order to provide a great experience to United passengers, those people providing the experience must feel valued and supported.”

That part of its press release was the charm section. You may remember, however, that the union prefers to employ wide-bodied sarcasm when referring to its bosses. It recently scoffed at United’s attempts to perform random uniform checks with riveting aplomb.

Now with the Flight Attendant Promoter Score, the union mused: “Being the problem solvers that we are, we thought we’d offer valuable insight on how management can improve this critical internal customer Flight Attendant experience.”

And we’ll let customers see just how appallingly managed we really are.

Just as you have likely tried to call an airline’s customer service line and been told the wait time is four hours, so flight attendants say they’ve been forced to wait for similar lengths of time when trying to call into United — to check on changes to their rostering.

Now, they’ll score the airline on, among other things, whether their contributions feel valued, whether they feel supported by bosses — especially during difficult times — and whether crew scheduling offers them promptly, well, service.

Also: He flew American Airlines, she flew United. For both, the unthinkable happened

Cheerily, the union concludes: “Being responsive to Flight Attendant feedback will make a significant impact on our work environment and should have a correlating impact on United’s NPS scores.”

You see, United management, we’re doing it to improve your Net Promoter Scores, the ones you love to crow about to analysts or anyone else who’ll listen.

Too many industries currently seem to struggle with employee discontent. Might this have something to do with employees seeing management profiteering and their self-content rising exponentially?

Doggo and baby share human’s love in the cutest way ever. Watch

Rupali Ganguly calls Sarabhai Vs Sarabhai cast family: ‘Satish Shah checks up on me, Ratna Pathak gets gifts for my son’

Smart chipmunk messes with cat upon realising there’s a door between them. Watch