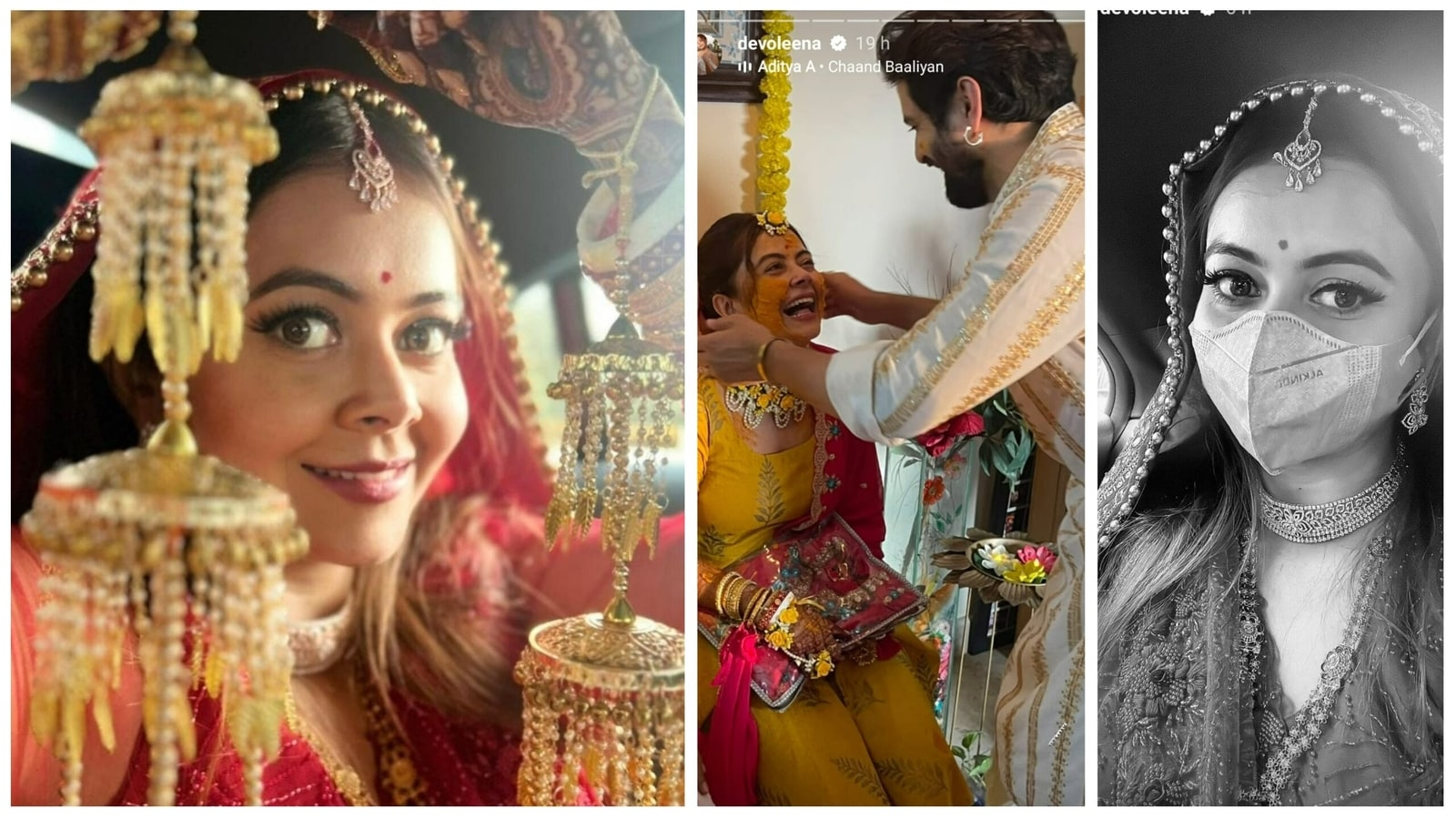 Popular TV actor Devoleena Bhattacharjee surprised fans as she shared pictures of herself dressed as a bride on social media on Wednesday. The actor shared multiple pictures from what appeared to be the wedding and haldi functions and also flaunted her mehndi. Her friend and co-stars Vishal Singh, Bhavini Purohit also shared pictures from the festivities, further confusing fans. Also read: Devoleena, Vishal are not engaged, angry fans say, ‘humko pagal banaya’. Watch

Devoleena took to her Instagram Stories on Wednesday, sharing a series of pictures of Vishal applying haldi to her face. One picture showed her decked in red bridal lehenga sitting in a car with her face mask on. A Boomerang video had her showing off her kaleere (hand ornaments). She then shared a few pictures of her mehndi followed by a selfie that shows her wearing a mangalsutra.

Many fans wondered if Vishal and Devoleena had tied the knot. The confusion was compounded when a wedding blog shared some of the pictures with the caption, “Here are some heart melting highlights from beautiful couple @devoleena @vishal.singh786 wedding.” However, others felt that they noticed the real groom in the background in different attire and it is not Vishal. “The groom is not Vishal,” one wrote. Another commented on a picture shared by Vishal, “You are not the groom. At least clarify.”

Some fans even felt that Devoleena isn’t really getting married but this is all for some TV show or advertisement. “This is for new music video or serial maybe,” read one comment. As per some reports, Devoleena did have a court marriage on Tuesday, which was attended by Vishal, Bhavini and a few other friends. However, there is no mention of who is the groom. These reports have not yet been confirmed. Devoleena reshared a few posts from the festivities made by Vishal, Bhavini and Rashmi Singh but none of the posts had any captions or description, further confusing the fans.

Devoleena is best known for playing Gopi bahu in the soap opera Saath Nibhaaana Saathiya from 2012-17. She has also appeared on shows like Sawaare Sabke Sapne Preeto and Laal Ishq. She has been a contestant on the reality show Bigg Boss for three successive seasons from 2019-22, finishing in 6th place in Bigg Boss 14. She was last seen in the web series First Second Chance earlier this year.

The Future of Netflix: Here’s why you won’t be able to share passwords like before-Explainers News , Firstpost

Little girl walks just like her father with her hands behind her back. Watch