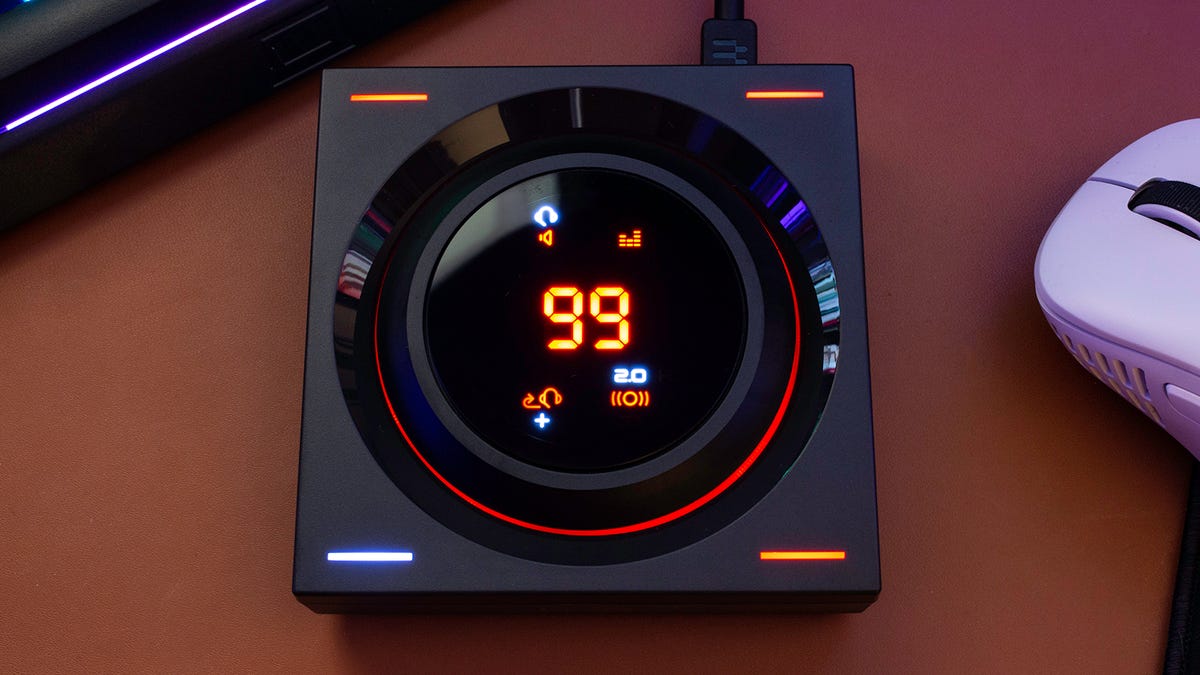 Long ago, especially in gamer terms, we typically built sound cards into our gaming PC builds alongside powerful video cards. But, over time, priorities shifted.

Have no doubt, those controls will drastically alter your in-game sound without requiring you to alt+tab out to companion apps.

Many gamers started relying on the sound output of their motherboards, ignoring the warnings of the interference or hiss such unshielded sound circuits could produce. Others traded in their internal Sound Blaster cards for external hardware. This new class of “external sound cards” were what most audiophiles would today call a DAC/amp combo.

One of the first big external sound card successes was Sennheiser’s original GSX 1000. This sleek little unit leveraged the company’s audio expertise and premium quality to create a great-sounding, compact way to elevate your game audio.

Also: 24 gift ideas for the gamer who has everything

Now Epos, the former gaming division of Sennheiser, is back with the second edition of this near-legendary device. Does it still hold up, with a few added upgrades, all these years later? Let’s find out.

From a physical standpoint, it’s easy to mistake the GSX 1000 2nd edition for its ancestor. Aside from a new, all-black color scheme, they’re identical at first glance. However, a detailed inspection uncovers a few key upgrades:

Otherwise, the product’s physical appearance remains unchanged, and that’s a good thing. The compact design was always sleek while still providing ample control over your gaming audio via its volume wheels and touch-based controls.

Have no doubt, those controls will drastically alter your in-game sound (more on this later) without requiring you to alt+tab out to companion apps. This makes on-the-fly, in-game changes a breeze.

Looking good on your desk is a bonus, but the real benefit of the new GSX 1000 is what it does for your in-game audio.

For reference, my typical gaming setup includes a Schitt Audio Modius DAC (go ahead and giggle) connected to a Drop + THX AAA headphone amplifier, with an XLR mic handled by a Focusrite Scarlett Solo USB interface, or a headset mic plugged straight into my motherboard.

The combined MSRP for that hardware is $630. Despite that, the $200 GSX 1000 actually did its job better than my complex setup under certain circumstances. Even at its worst, I’d still say it was about 80% as good as my default audio stack. Let me explain.

The GSX 1000 line’s most important job has always been providing excellent in-game audio. To that end, Epos includes several presets accessed via the device’s touchscreen, one of which is dubbed “Esports.”

When Esports is used with decent headphones or a solid gaming headset, it provides one of the most pinpoint accurate directional sound experiences I’ve heard, beating the aforementioned $630 stack by slightly narrowing the precise direction a given sound is coming from. If this is what truly matters to you, save the $430 difference and buy this unit right now.

However, most of us don’t use our PCs, or even our gaming PCs, exclusively for gaming. When not competitively gaming, you’ll want to opt for one of the other equalizer presets the GSX 1000 offers. Esports’ emphasized highs and reduced bass are great for situational awareness, but they’ll murder your favorite song.

Luckily, the GSX 1000 can easily be switched to its Music or Story (should probably be called Movie) presets, which do a great job of tweaking its sound to meet the needs of those very different media types. Can this little device still beat the more expensive stack even here too? No, it definitely cannot.

Also: The best headphones you can buy right now

The general fidelity is a little worse, the vocals aren’t as clear, the instruments aren’t as defined, and the overall sound profile is less roomy. But, all of those deltas are far smaller than you’d expect for less than one-third the price of the more expensive setup.

Even if you did opt for a more expensive, multi-device setup, you still wouldn’t get the access to on-device controls the GSX 1000 provides. In addition to the EQ toggles mentioned above, those comprehensive controls include:

All settings can also be saved to one of four presets. These presets can then be accessed by tapping one of the touch-sensitive lines on the device’s corners, making it easy to switch from gaming to music listening to movie viewing with a single tap.

When you’re not actively tweaking it, the GSX 1000 will automatically dim, displaying only your volume level. It also features a handy proximity sensor to brighten the display as your hand approaches.

If you’re a hardcore, competitive gamer worried solely about your in-game performance, even at the potential cost of other aspects of sound fidelity, the GSX 1000 remains an even easier recommendation in its 2nd Edition form than it was in its first. Even if you do like to mix in the occasional music-listening session or movie night, it still performs admirably for such a small device at this price point.

Will this impress the snootiest of audiophiles? Probably not. But, while they’re analyzing mahogany overtones and crystalline timbre characteristics, you’ll be removing the head of the enemy that thought he was sneaking up on you because you heard him coming from a mile away.

Creative’s Sound Blaster brand is still around, with the company also having largely shifted to external cards like this one. This model provides more I/O options for speakers and optical audio than the GSX 1000 2nd Edition but uses simpler controls with no display.

An option from HyperX that’s so tiny you’d mistake it for an in-line remote control. While it offers many of the same features as the GSX 1000 2nd Edition, don’t expect the same level of audio fidelity or granular hardware controls.

The original is still available. If you prefer its slightly more varied color scheme, or you just can’t get your hands on the frequently sold-out second edition. It’s a viable option for anyone that doesn’t benefit from the generational improvements mentioned above.