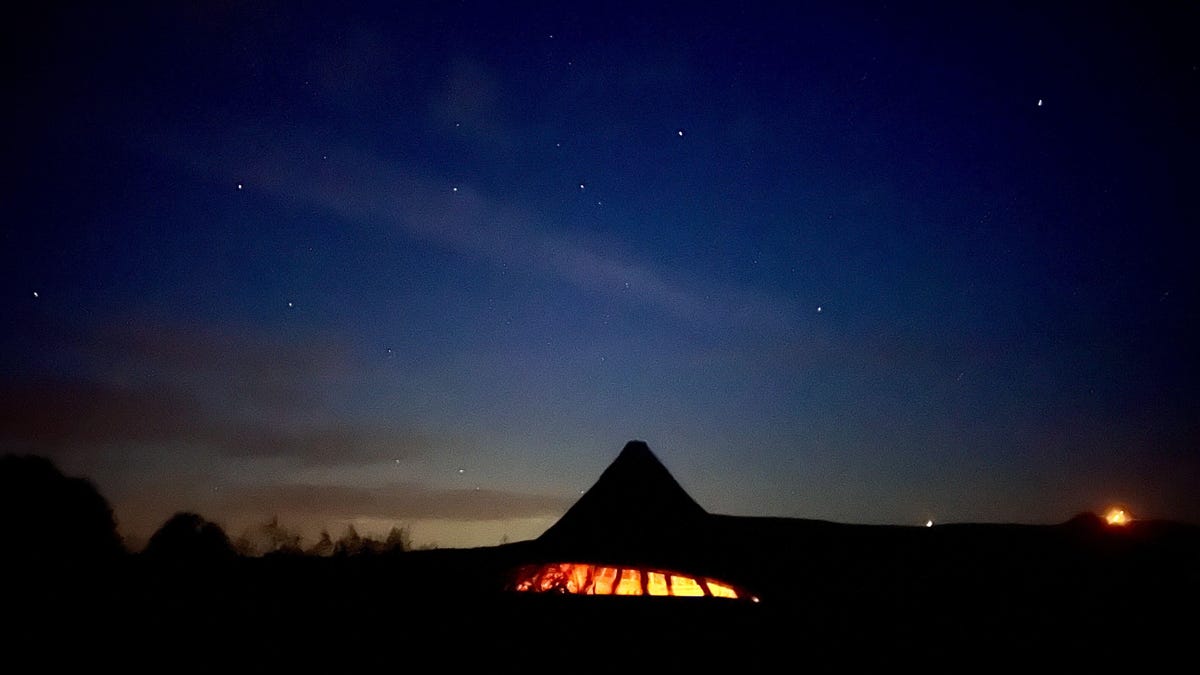 You can buy a power bank for a few bucks. And it might work. If you’re lucky.

Then you can buy a decent power bank from companies such as Anker or Zendure and get a product that’ll cost you more money, but you know it’s going to work, work well, and give you years of service.

If I need a power bank for my off-the-grid activities, this is when I turn to something more professional. V-mount batteries.

They’re rechargeable battery packs that have a specific mount to connect them to photographic and video equipment.

The name comes from the shape of the locking plate that is used to attach this battery to devices or stands. It’s in the shape of a V.

Originally developed by Sony, the V-mount became a standard that’s now found on all sorts of non-Sony equipment, powering cameras, lighting, displays, microphones, and other devices.

Well, a lot of pros started out using V-mount because something they own needed it. It was a reliable way of powering devices when there wasn’t mains power available.

Nowadays, V-mount is chosen by photographers and videographers as a way to power their cameras, monitors, and other devices. A single V-mount battery can power multiple devices, so it means that you don’t need to worry about keeping an eye on multiple batteries, swapping them when they get low and keeping them all charged up. You just have a single battery to care for.

But there have been a few drawbacks to the V-mount. Specifically, they were big and heavy, and you needed a specific charger to recharge them, which means that unless you were a professional willing to drop a lot of cash, they were prohibitively expensive to get into. For example:

Over the past year, I’ve noticed that V-mount batteries have evolved into multi-purpose power banks that feature not only the power outputs that you’d expect from a V-mount battery but also added USB-A and USB-C.

The addition of a USB-C port means that not only do you have a high-power port, but also a way to quickly recharge the V-mount battery without needing a bespoke charger.

This not only makes them really versatile, but also reduces the cost of using them.

Older V-mount batteries were also heavy and big, so you really didn’t want to carry too many of them with you.

There’s also an upcoming VB155 with 155Wh/155W max output, but I have not yet had the chance to test this battery.

They’re called “mini” because they are some 30% smaller than standard V-mount batteries, yet still retain all the features professionals expect from V-mount and come with additional features.

You can attach all sorts of plates and adapters to the V-mount.

There are 8V and 12V DC output barrel jacks, which have a wide range of uses when dealing with photo, video, and audio equipment. There’s a D-Tap output that again is used to power a whole range of devices (I use D-Tap to power my Sony A7IV mirrorless camera when it’s being used for video along with the Atomos Ninja V external monitor).

There are also USB-A and USB-C ports. That USB-C port is super handy for not just charging devices, but it’s also a quick and convenient way to charge the V-mount battery without needing a special charger.

On the front is an OLED display that displays battery information. It’s not bright, but that’s by design because the last thing you want on video or photo sets is a glowing panel adding random lighting!

There are several features that I like in these SmallRig V-mount batteries.

First, V-mount batteries are designed to deliver power over multiple outputs. I’ve lost count of the number of times I’ve seen a power bank that’s bristling with ports, but as soon as you try to use more than one, the power output becomes unstable.

That sort of thing is just useless.

These SmallRig V-mount batteries deliver the power when I need it. This is a top priority.

Then there’s the build quality.

These batteries are tough and designed to be used by people who aren’t all that careful with things. The outer is a fire-resistant polycarbonate that takes quite a beating, and ports are covered by rubber protectors to prevent dirt and dust from getting in (note however that these are not waterproof). They have a working temperature of -10°C- 45°C (14°F – 113°F), which gives them great flexibility in the outdoors.

Then there’s the fact that they do what they claim to do. I spend a lot of time making sure manufacturers are being honest.

There are no exaggerated power outputs and no fictional capacities here.

You get exactly what you pay for.

The “mini” nature of these batteries is also really appreciated. Modern drones and cameras need a lot of power, and batteries can become a big part of the load I carry.

I also like the attention to little details. There are screw threads built into the V-mount plate to offer greater attachment flexibility, the rubber doors over the ports fit well and don’t feel like they are going to break off, and there are also holes for a lanyard to be threaded through the battery.

Not cheap, but worth the money

Robbery on The Crown sets: 350 antique props stolen during filming in UK