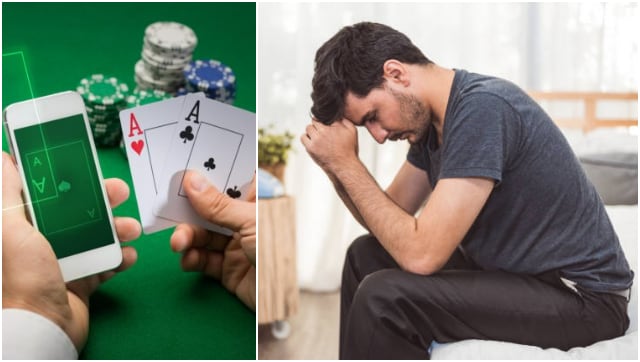 This article is a part of a larger series on Online Gaming in India. The previous article deals with why online gaming platforms want their users to believe that their products are a game of skill. Click here to read the article.

Online gaming has become extremely popular in India and has grown into a massive industry, with millions of people, spending billions of rupees across various games, every year. For the government, it is also a great source of tax revenue. However, the industry is largely unregulated, with little to no government oversight or laws governing it. What this basically means, is that the people involved in online gaming, especially as players have little to no protection against online gaming platforms.

There have been many instances where people have ruined themselves financially and even died by suicide because they were addicted to online gambling. Image Credit: Pexels

Irrespective of what one feels about online gaming, whether one considers them a game of skill or a game of luck, the fact remains that online gaming is highly addictive. There have been several instances where people addicted to online games have bet their life savings on various games. Things take an even uglier turn when people die by suicide because of online games and financial ruination.

The Insidious Trap
The manner in which most online gaming platforms, especially fantasy league platforms is something that we need to look at as it reveals a lot of the insidious tactics that these platforms use.

In their ads, they will often show a “real” customer who would originally be from a very humble background, making it big because of the winnings that they got from the platform. Or a variation of that ad would be a person from a rural setting, belonging to a very middle-class background, “winning” a high-end car.

The message is clear – if this person can win this big, so can you. The kicker in all of this? All the sob stories that are shown during these campaigns are scripted.

A very popular fantasy league platform ran a similar campaign and got the who’s who of cricket to feature in it. The ad campaign was extensively run on TV during the IPL and other shows, as well as on YouTube.

Furthermore, this fantasy league app then got a ton of YouTube influencers to promote the app using a 15-30 second spot on their videos. On average, these YouTubers would have about a million or so subscribers and average about 2 lakh views per video, which isn’t exactly a lot.

The shocker is that for this campaign, each YouTuber with about 2-2.5 lakh average views per video was paid a 6-7 figure sum for one integration. Cricketers and actors who promoted this app were paid tens of crores.

To push potential customers over the edge, and get them to finally sign up for this, these platforms will run another set of lucrative campaigns – new players will either be issued a small amount of in-game currency, using which they will win because they are playing against bots.

Or, they will entice users to spend one rupee in the game to win an iPhone or some other prize. The moment a user spends their first rupee on such apps, the developers have broken the most crucial barrier to extort more money out of them.

The fact that these games are designed in a way that is extremely addictive is another story altogether. Starting from the rush of winning that players are fed initially when they are paired up with bots, in some of these betting games, to the way the UI and the animations are created to amp up wins and playdown losses, making the users lose all sense of perspective and reality.

These gaming apps also create a sense of urgency and false achievement. Because of this, players get hardwired to play for long hours without breaks, pay high fees and participate in multiple games and tournaments, all with their own real money.

When things go wrong
A 29-year-old woman, allegedly ended her life after she lost 200 grams or 20 tolas or sovereigns of gold jewellery and Rs 3 lakh of her sisters’ money in online gambling. During the lockdown, she is said to have become addicted to online gambling, because of which she mortgaged 20 tolas over a period of time, but lost the money in online gambling. She borrowed Rs 1.5 lakh each from her two sisters to redeem the pledged jewels but lost this money as well.

In another incident, a 39-year-old woman died by suicide, after her unemployed husband, who was addicted to online gaming lost close to Rs 20,000 in online rummy. The money was earmarked for their son’s school fees.

These two are the first of many cases in Tamil Nadu that led to the previous AIADMK government banning online gaming altogether. And while that decision was harsh and a knee-jerk reaction at best it did show that there is a dire need to regulate such games. The Madras High Court later struck down the ban and asked them to come up with a proper set of regulations instead of banning these games.

The numerous instances of cheating and fraud
One of the major issues with the lack of regulation in online gaming in India is the potential for fraud. Because there are no clear laws or regulations governing the industry, players may be at risk of being scammed by unscrupulous individuals or companies.

For example, players may be promised rewards or prizes that never materialize, or they may be asked to pay money upfront for the opportunity to participate in a game or tournament, only to find out that the event does not exist.

In many instances, especially with offshore gaming platforms, it has been found that the games were rigged. On many platforms, games such as poker and rummy play out in a way in which new players have a better chance of winning but only at the beginning. As they spend more and more time and money on these games, they start losing.

To keep these players engaged, the algorithm of these platforms will ensure they win one game or two, just as the interest of the player starts waning.

The great debate: Games of skill or games of chance?
It is critical for online betting games and fantasy leagues to legally appear as games of skill as opposed to games of chance. However, the way these online games need to position themselves to the public, is that anyone can win, and more importantly, win big.

Most online gaming platforms actually struggle to straddle the thin line between appearing as a game of skill and a game of luck.

On one hand, these platforms want to be perceived as a game where it is possible to even for the most novice of players to win and to do so, without being perceived as a game of luck. Only then will they be able to get more and more players on board.

On the other hand, these games must portray themselves as games of skill, otherwise, they will be taxed at a much higher rate, and will be subject to a lot of other, rules set by the state, that regulate how the gaming industry in the state operates.

The need for regulation
Gaming needs regulation, especially when players have the tendency to become addicted, and when there is a serious financial risk involved. The lack of regulation in the online gaming industry, especially in how the market themselves in India, has led to some serious consequences for individuals and families. A set of proper regulations will go a long way to protect people from the dark side of online gaming.

More importantly, however, it will be a boon for the industry as well. The states and UTs in India where gambling is not only legal but also regulated, namely, Goa, Sikkim and Daman, show that when the industry is regulated and not just taxed, it prospers really well. Moreover, regulations in online gaming will help the industry to grow exponentially and will allay all fears from potential investors as well.

This article is a part of a larger series on Online Gaming in India. Click here to read the other articles that are a part of this series.