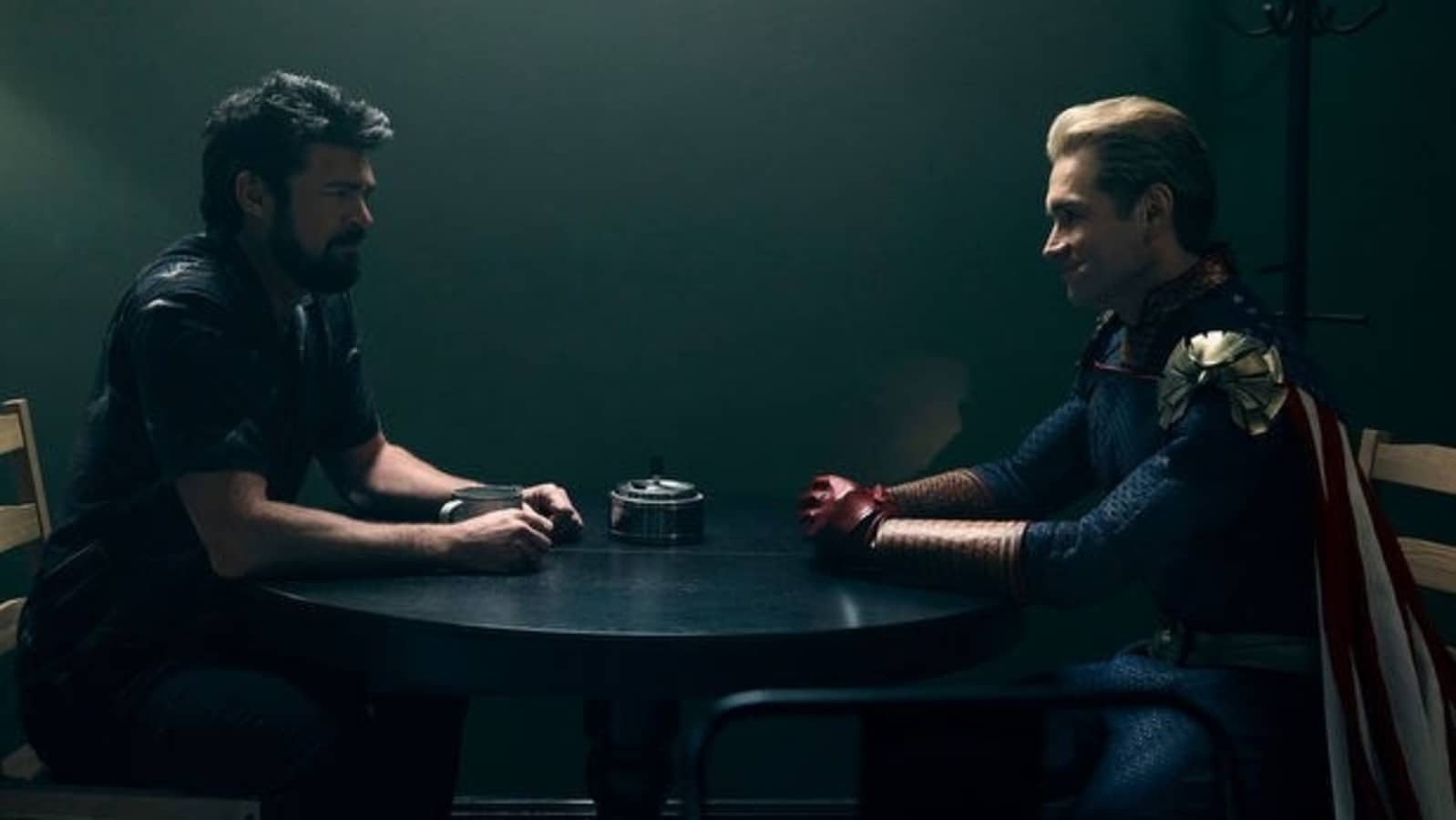 In an interaction with  prior to the release of the third season of The Boys, cast member had Claudia Doumit said, “I think that every season: ‘How are they going to top that?’ And they top that.” That pretty much sums up The Boys season 3, which begins streaming on Amazon Prime Video on June 3. The show is much Boys-er in every way in its newest season. It is gorier, crazier, darker, funnier, and overall five notches more bonkers than ever before. The irreverent take on superheroes is still fresh and manages to surprise and shock the audience even after three seasons. Also read: The Boys: Karen Fukuhara, Claudia Doumit say superhero genre was male-centric

Part satire, part dark humour, and part sheer existential horror, The Boys is an irreverent take on the superhero genre. Based on the comic book of the same name by Garth Ennis and Darick Robertson, The Boys is set in a universe, where superheroes are not just common but mega celebrities. The catch is that these ‘supes’ are not the good guys. Power hungry and abusive, the superpowered beings are controlled by a mega corporation named Vought, which aims to function as the world’s biggest power broker. The Boys is the titular group of everyday men and women, who have decided to take these gods among men down. The third season follows The Boys attempting to find a fabled weapon to kill the mightiest superhero Homelander, as he descends further into madness and paranoia.

Season 3 of The Boys is a smartly-packaged and very cleverly-written satire with references to several real-life pop culture and political events like the Marvel Cinematic Universe, the Restore the Snyderverse campaign, and even the Black Lives Matter movement. It’s relevant, it’s political, and it is well-intentioned. The gorefest and sleaze is just the icing on the top, but it is rather interesting icing. After season 2’s infamous whale scene (just Google it please, I do not wish to describe it), fans were curious how the show could top that. And it does, not once but twice. Avoiding spoilers, let’s just say scenes involving a superhero called Termite and one about the comic’s famous Herogasm storyline are some of the craziest things I have seen on screen. The show does know how to keep on getting better in that department.

The Boys works because it packages gore, blood, laughs, and cringe seamlessly. The show shocks and surprises with both its violence, and numerous celeb cameos out of nowhere. I, for one, did not expect to see Ashton Kutcher and Mila Kunis as themselves singing in a PSA on this show. And then there is a surprising Rogers and Hammerstein-esque song-and-dance routine in the middle of all the bloodshed. The plot twists still have the power to shock, at least those who haven’t read the comic. The twists are still unpredictable largely, which speaks volumes about the effort the writers have put in in trying to keep the show fresh and engaging.

While many believe the USP of the show is the premise or the blood and gore, for me it has always been the performances. Karl Urban is among the most underrated actors of our times. As with most roles, he makes Billy Butcher his own. By this season, he can sleepwalk through it. But he doesn’t. He portrays Butcher’s propensity to skirt with the line dividing the right and wrong beautifully.

If Butcher has no morals, then the other member of The Boys–Hughie–is the show’s moral compass. Jack Quaid returns and shows how much he has grown as an actor. The role reversal in the initial episodes, where he is Butcher’s ‘boss’ shows the awkwardness in him and refusal to assert authority. And Jack Quaid plays it off adeptly. Among the rest of the cast, people who stand out are Karen Fukuhara, Claudia Doumit, and Chace Crawford, all of whom make the show so much more enjoyable with their performances.

But the real star of the show is Antony Starr as the all-powerful Homelander. He is a delight to watch and you cannot take your eyes off of him whenever he is on screen. Having answered questions like ‘what if Superman had mommy issues’ and ‘what if Superman secretly loved a Nazi’, this time Antony depicts what it would be like if Superman was lonely, scared, and cornered. It’s a scary thought for a man so powerful to feel this way and Antony brings out Homelander’s frustration so beautifully that despite him being downright evil, you empathise with him.

But Homelander has finally met his match it seems. In season 3 we see Soldier Boy (Jensen Ackles). The character is a parody of Marvel’s Captain America and is pretty much the antithesis of the first Avenger. Soldier Boy is racist, homophobic, sexist, and abusive. He is also really powerful, strong enough to pose a threat to the virtually invincible Homelander. Jensen is a long way from his beloved portrayal of Dean Winchester from Supernatural. And he finally gets a chance to show what a wonderful actor he is. The charm stays–I mean Jensen can’t just turn it off–but in comes a strong sense of hatred and evil, as well.

Watch The Boys only if you have the stomach for bucketloads of violence, bloodshed, nudity, and insane sex scenes that have no business being this graphic. But the good part about the show is that it does not feel gratuitous. Nowhere do you feel that violence and sleaze have been inserted just to titillate. And if you are willing to look past all that, you may find yourself enjoying this ‘diabolical’ show.

Bear opens doors of parked car with ease, climbs inside to look for food. Watch