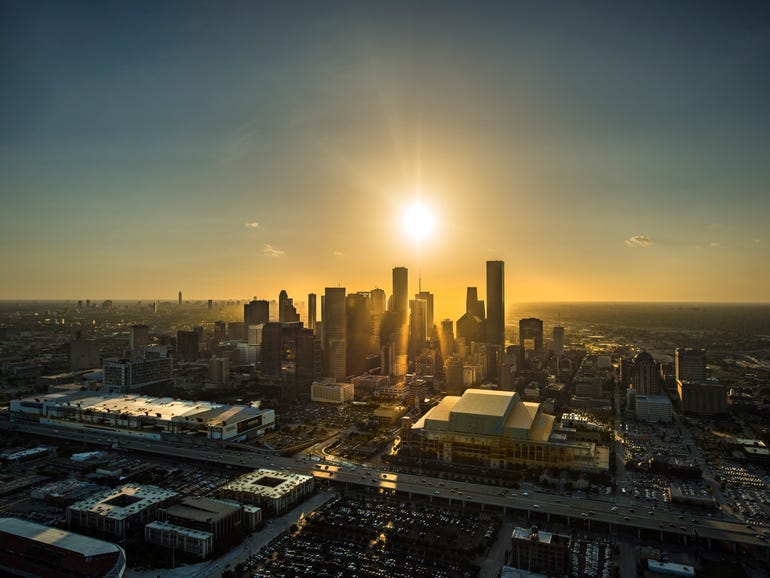 Pursuing a career in tech doesn’t have to mean relocating to Silicon Valley. Houston’s booming tech sector offers diverse opportunities at a much lower cost of living. Before searching for jobs in Houston, make sure you understand the city, its tech sector, and tech salaries.

Our guide to tech jobs in Houston walks through the data and resources you need to start or advance a tech career in Space City. With thriving energy and industrial sectors –– and more Fortune 500 headquarters than nearly every other city –– Houston offers many opportunities for tech jobs.

Houston at a glance

In 2021, Houston sat poised to enter the top-ten cities for tech employment. Nearly a quarter of a million tech workers call Houston home. So do over 9,200 companies, a number that shot up more than 5% from 2019 to 2020. The city also reports over 63,000 tech job postings.

According to CompTIA, Houston’s most popular tech jobs include software programming, web development, cybersecurity, and network administration. Database administration and data science also make up an important part of the city’s growing tech industry, which includes major companies and startups.

The tech sector in Houston contributes $29.2 billion to the area’s gross domestic product. Major tech employers include Microsoft, Amazon, and Google. Many of the area’s major energy companies increasingly hire tech professionals, and Hewlett Packard Enterprise will open a new headquarters in Houston in 2022.

Many tech jobs in Houston offer six-figure salaries. According to May 2019 data on the Houston metropolitan area, several Houston tech jobs paid salaries above the national average for all occupations.

Building a tech career in Houston

Houston offers many opportunities to launch a tech career. In addition to the city’s growing population and below-average cost of living, tech professionals benefit from Houston’s booming tech sector. The city’s 5.1% unemployment rate as of December 2021 ranks slightly higher than the national average of 3.9%.

You can also advance your technology career in Houston by networking, researching tech companies, and considering remote work opportunities.

The COVID-19 pandemic has made remote work more common. This trend will likely continue as several tech companies shift to a long-term remote work model.

Several tech jobs can be done remotely, including information technology careers. Web developer and software engineering jobs, which require a bachelor’s degree, also have a growing number of remote opportunities.

Professionals considering a remote option for tech jobs in Houston benefit from the city’s low cost of living. Houston costs 45.6% less to live in than San Francisco. While Houston ranks as more expensive than some other cities –– it’s about 9.5% more expensive than Columbus, Ohio –– Houston can be a great home base for remote tech workers.

When considering cities to launch a tech career, Houston might not be the first city that comes to mind. But Houston’s growing tech sector and low cost of living make it a great place to work in tech. Whether you’re starting out in tech, looking for new remote careers, or hoping to level up your career, keep Houston on your radar.