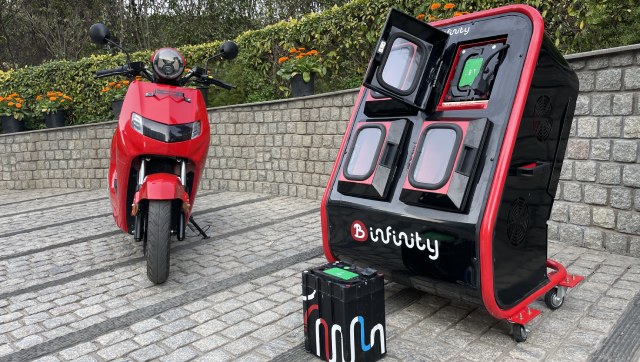 Leveraging the impetus for electric vehicle (EV) adoption in the country, the Centre announced its intention of drafting a battery swapping policy to further accelerate the uptake of cleaner vehicles in February. When presenting the Union Budget for the year 2022-23, Finance Minister Nirmala Sitharaman encouraged private players to develop sustainable and innovative business models for ‘Battery or Energy as a Service’.

The initial hurdles faced by the EV sector were smoothened through schemes and policies such as Faster Adoption and Manufacturing of (Hybrid and) Electric vehicles in India (FAME) and several other initiatives by state governments. These have helped ensure that the EV sector continues to grow, despite the global lockdown putting brakes across industries. With encouraging signs, India has committed to ensuring that 30% of vehicle sales are electric by the end of the decade.

Any conversation around EVs quickly turns to technological and logistical hurdles in re-energizing their battery packs. This can be done in two ways: setting up charging points in private and public spaces, and installing battery swapping booths. While the former requires more land and higher capacity charging equipment, the latter does not. The convenience of battery swapping is akin to that of fuel refilling, as the battery in the EV can be swapped with a fully charged battery as quickly as refuelling an internal combustion engine vehicle.

Charging stations are often equipped with direct current (DC) fast chargers using to minimize the waiting period for the consumer. This has a few downsides. Fast charging lowers the battery’s charging cycles, especially in an uncontrolled environment, exposed to the vagaries of India’s weather conditions. They also require more space, a scarcity in urban areas, to accommodate vehicles as they charge. Even the fastest chargers take at least half an hour for scooters. Another disadvantage with fast charging stations is their high power demand which burdens the electricity grid. Increasing the capacity of substations and their density is a capital-intensive process. Moreover, high power charging stations can destabilize comparatively low power residential grids owing to the voltage fluctutations that EV charging can cause, thereby making there deployment less than ideal for residential areas.

On the other hand, charging points could be cheaper to set up if land costs are excluded. Battery swapping stations can also stack multiple batteries on top of each other, further reducing land requirements. This allows swapping stations to be built within fuel stations as well.

Battery swapping stations, while requiring lesser land, have to pay the price of having more batteries than on-road EVs to ensure constant availability. This is a cost that needs to be borne by fleet operators in the commercial segment. Soon after the Union Budget called for private players to invest in battery swapping, several business leaders lent their support. Some also asked subsidies for ‘floating’ batteries or extra batteries required for battery swapping logistics, something the current FAME scheme does not support. For their part, private players need to come together and ensure cross-compatibility of batteries and EVs to ensure the infrastructure built is used to its full potential.

Operators also prefer investing in battery swapping stations rather than fast charging points as the former gives more control in maintaining electricity demand and supply. For example, local discom agencies are promoting a ‘Time-of-Day’ (ToD) tariff regime according to the power demand profile for the service area of the discom. ToD also helps stagger the demand across the day, thereby keeping it below the substation’s capacity providing the energy. On the other hand, fast charging requires expensive infrastructure and high capacity substations to meet its energy demands. Battery swapping also allows operators to charge batteries separately from the swapping station. This gives them more flexibility in setting up swapping stations in an urban area.

For battery-swapping stations to become financially sustainable, standardization of battery and terminal points plays a significant role. However, with the competition heating up to capture the nascent market at the earliest, vehicle manufacturers are investing a significant portion of their resources in researching and developing more sophisticated batteries.

The Centre has already taken the first steps towards this end goal. In August 2020, the Union Ministry of Road Transport and Highways (MORTH) allowed EVs to be sold without pre-fitted batteries. This drastically reduces the price of the vehicle (batteries can make up to 50% of an EVs cost) while giving the consumer the freedom to lease batteries without having to worry about its long-term maintenance and associated costs. It also allows consumers to use battery swapping stations and the option of detaching batteries to charge them at home. While a controlled charging environment helps increase battery life, the consumer also stands to benefit by keeping up with the rapidly developing battery technologies. In current times, most electric vehicles come fitted with Lithium-ion batteries, but they are expected to be replaced with Lithium-graphene, which have higher capacities while being smaller in size.

For individuals who do not have access to charging points at their residence or workspaces, battery swapping points is a welcome convenience. Also, for commercial operators – especially those performing last-mile deliveries as battery swapping allows for minimum downtime for their vehicles. Having a fully charged battery in the vehicle in two to five minutes is a major advantage of battery swapping.

Around the world, especially in the global north, battery charging points have gained significant traction compared to swapping stations. This is mainly because EVs in western countries are either cars for personal use or buses in commercial operations. Swapping is not a convenient option for heavier vehicles as it requires the heavy lifting of bigger batteries. However, the situation in India is very different – nearly 70% of vehicles on the roads are two-wheelers. Commercial operations of two-wheelers have also seen a marked increase, especially since the pandemic-induced lockdowns. And batteries that are found in electric two-wheelers can easily be swapped manually, owing to low weight. As automated battery swapping infrastructure is not required for moving two-wheeler batteries, there exists significant potential in the segment as far as battery swapping goes.

WRI India’s analysis shows the total cost of operation of electric two-wheelers for commercial operators reaches parity with petrol bikes within a year of usage, without using FAME subsidies. Sensing the market for this, electric two-wheeler manufacturers, operators and aggregators have already begun collaborating with e-commerce, cloud kitchens, and grocery shops to reduce the cost of hyperlocal deliveries. In addition, one vehicle manufacturer recently announced their commitment to battery swapping stations, even for personal use. Given the segment’s high usage and lack of time to charge their batteries, a dense battery-swapping network in urban areas would go a long way to accelerate the EV sector.

Lock Upp’s Shivam Sharma says no one can love Payal Rohatgi: ‘That’s why Sangram Singh doesn’t stay with her’

Apple is bringing back this much-missed feature for your iPhone