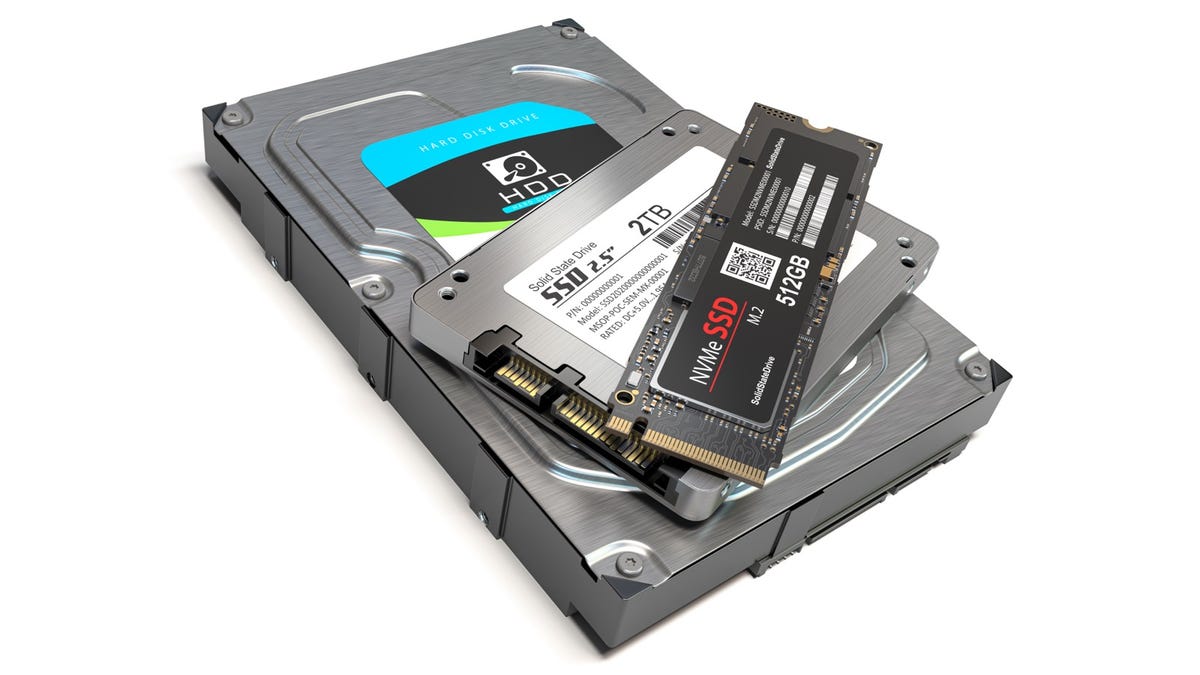 Data storage continues to be a battle between the incumbent HDD (Hard Disk Drive) and the SSD (Solid State Drive). But on first blush, it might seem like the newer, faster SSDs are far better suited for every task than HDDs, and that there’s no reason to consider HDDs anymore.

While it’s very easy to sell the merits of SDDs, there are plenty of cases where HDDs are a perfect choice, even in a modern setting.

And by choosing the right storage for the right job, you can save both money and increase the lifespan of a device by lengthening the time between upgrades.

An SSD is a storage device where the data is stored on flash memory chips. These chips offer fast read and write speeds, making SSDs a fast data storage medium.

There are no moving parts in an SSD, which means that they are silent when in use and are not susceptible to damage from vibrations and impacts.

Also: How to identify your motherboard quickly and easily

Unlike an SSD, where the data is stored on flash memory chips, HDDs store their data on rotating disks called platters. While not as fast as SSDs, HDDs are much cheaper and come in far bigger sizes, up to 22TB.

However, the rotating platters and other moving parts do mean that hard drives are move vulnerable to wear and tear and are not as robust as SSDs are.

You should buy an SSD if…

If you’re looking for fast boot speeds or you want to load games or applications effortlessly, then an SSD will blow even the fastest HDD out of the water. The slowest SSDs is easily ten times faster than the fastest HDD, so there’s just no comparison to be made. If you need speed, you need an SSD!

Handling big files, such as big video files, is a quick and simple way to bog down an HDD. SSDs allow professionals to load and save big files far more effortlessly, speeding up workflow and making your desktop or laptop seems a lot faster. SSDs will also speed up backups, which means that you spend less time protecting your work from possible loss of accidental deletion.

Thanks to there being no moving parts, SSDs are far more rugged and resistant to vibrations and impacts than HDDs are. You can literally throw SSDs in your bag with no worry that they are going to be damaged and your data lost. SSDs are the perfect choice both for laptops and desktops, but also for external storage drives that you take with you when out and about.

Also: What graphics card do I have? How to check your GPU and drivers

You should buy an HDD if…

1. You needs lots of storage space.

Big HDDs are cheap compared to SSDs. Even a massive 20TB hard drive will set you back less than $300 (compare this to a 4TB SSD, which, at the time of writing, is over $300), and this means you get massive storage capacity for big applications and games, huge video files, and backups. If you’re looking for the best bang for the buck when it comes to storage space, you need to go for HDDs.

2. You’re looking to save money.

Want the best bang for your bucks? Go for an HDD. A 2TB HDD will cost you less than $50 (this is currently the sweet spot for price vs capacity), and while SSDs are rapidly dropping in price, you’d be lucky to get an SSD half that capacity for the same money. And while for most people, 2TB is enough storage, if it isn’t, then you can also ways grab another 2TB drive, or even a 4TB drive (which, at the time of writing, is about $70).

3. You’re using it for backup.

HDDs are the best when it comes to backups because of their high capacity and low cost per gigabyte. Unless money is no option, if you need the fastest possible backup, it doesn’t make sense to use SSDs for backup purposes. No matter whether you’re using a single HDD in an external enclosure, or multiple drives in a external storage box or NAS device, HDDs will give you all the storage space you need. And because backup devices aren’t being heavily used, HDDs will offer a high level of reliability.

The slowest SSD is ten times faster than the fastest HDD, so there’s just no comparing the two when it comes to performance. If you want speed, you need an SSD. Even a budget SSD such as 1TB WD Blue is a massive upgrade over a HDD.

I’d have the operating system loaded onto an SSD for speed, and the games loaded onto an HDD for the sheer storage capacity. This offers the best of both worlds without breaking the bank.

However, for a gaming PC, if I had to choose one, I’d pick a fast HDD (something like a 4TB WD Black drive), because unless the sky’s the limit for budget, I’d be paying really big money for a high-capacity SSD.

This is a tough question because I’ve had drives fail within days and others live for over a decade, however, as a good rule of thumb, you should expect 3 to 5 years from an HDD, and 5 to 10 years from an SSD.

It ultimately depends on whether you prioritize speed or storage space. However, I find that most people either overestimate how much space they need or end up filling a big drive with all sorts of rubbish that could be deleted (or put into storage), so I’d say that a 256GB SSD would be enough storage for the average user while at the same time offering much better speed and performance.