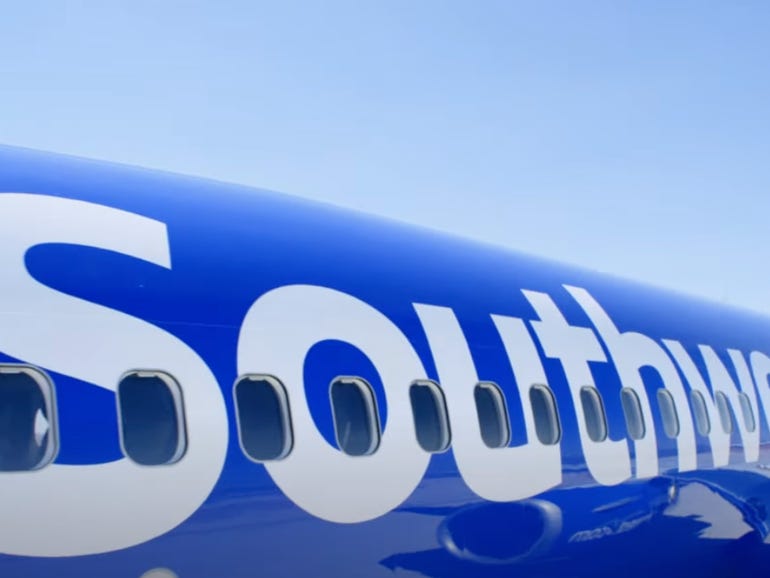 Southwest Airlines has always been out on its own.

Or, at least, that’s the impression it’s wanted to project.

The others charge for bags? Southwest doesn’t. The others have assigned seating? Ah, that takes too long to sort out. So Southwest lets passengers on thirty at a time and allows them to pick the best available seat for them.

Oddly, this means planes should turn around more quickly, too, a highly profitable maneuver.

Still, it’s a fine, successful and rather loved airline.

Oh, there’s one more very Southwest thing. With the likes of American, United and Delta, you’ll find their offerings on comparison sites like Expedia, Orbitz and Kayak.

Southwest insists you go to Southwest.com and buy your tickets there.

When I asked about this last year, the airline’s reasoning went like so: “By utilizing Southwest.com and our call centers, customers can rest at ease knowing that when they go to book with Southwest, they’re getting the lowest fare without any strings that online travel agencies might try to sneak in there, such as fees and restrictions. This is especially important as a low-cost, low-fare, high-quality airline.”

Southwest, in fact, is really, really suspicious of any third parties at all.

Also: Delta says it wants the very best customers (then it treats them like this)

It says: “Allowing a third-party access to our consumer fares and flights adds a new dimension that would erode our promise to our customers of offering friendly, reliable, and low-cost air travel. We prefer to build a relationship with the customer on their journey from booking to destination, and OTAs [online travel agencies] would change the experience our customers expect from us.”

I want to get away. Bigly.

Last week, I was looking to get away. A long way away to a place over the ocean where Southwest doesn’t fly. This happens to me at regular intervals.

My lazy instinct is to go to Kayak and compare fares. However, immediately on loading the page, I was assaulted by a big black box in the top right-hand corner. And it was big. The box told me it was big.

It read, in large letters: “This is big. Southwest is here.”

“What?” I thought. “Has Southwest abandoned one of its core principles and leapt into the comparative pool of the populist and unwashed?”

Goodness me. But I thought Kayak was precisely one of those unfriendly comparison third parties that Southwest steadfastly avoids. What was happening here?

Or, rather, what’s not happening?

Business travel isn’t coming back in remotely the way airlines thought it would. Outgoing Southwest CEO Gary Kelly admitted during the company’s last earnings call that he previously thought 2022 would look very different from the truths it offers now.

Also: An extraordinary, incredible example of customer service (yes, from an airline)

“We have to be more heavily dependent on consumer travel than we were before,” he said.

But here’s the problem: airlines are desperate for business travelers because that’s where the greater profits lie. Yet they’re all offering dismal projections for its return.

Few can surely deny that the rapid development of Zoom and Microsoft Teams has contributed to companies feeling less need to send their executives into COVID-infested air. CFOs have been delighted with the results.

So here is Southwest appearing to abandon — no, compromise — its distinct principles in order to grab as much corporate business as it can.

Kayak for Business, you see, is a free booking platform with one condition: you have to have a corporate business email address. Any other kind, and you get shoved onto a waiting list.

It’s an attempt to get small and medium-sized businesses to sign up to a corporate service — now teased with the large glory of being able to compare Southwest’s offerings directly.

Southwest does already expose its fares to global distribution systems so that travel agents can take a peek. It also has deals with travel management companies and certain corporate booking tools.

Naturally, I asked Southwest whether this apparently new relationship indicated a change of mood at the airline. I’ll update, should I hear. Oddly, I couldn’t find a Southwest press release announcing the Kayak foray.

I also looked at the Kayak menu in an especially optimistic mood to see whether everyone could now see Southwest’s fares compared on a single screen with those of rivals.

Sadly not. Although there is a “get info” link on the left-hand Kayak menu of airlines. Yes, it goes straight to the Southwest.com site.

The pandemic has changed many things for airlines. Thanks to taxpayer money, they stayed alive, something Southwest acknowledges.

Still, if you’re a regular flyer without a Kayak for Business account, it must be jarring to see that big, black box telling you Southwest gives special favors to businesspeople. It’s the people’s airline, after all.

The message appears evident: If you’ve got a business, we’ll let you compare our fares. If you don’t, we won’t.

HBO Max deal: Save 40% on a one-year subscription now