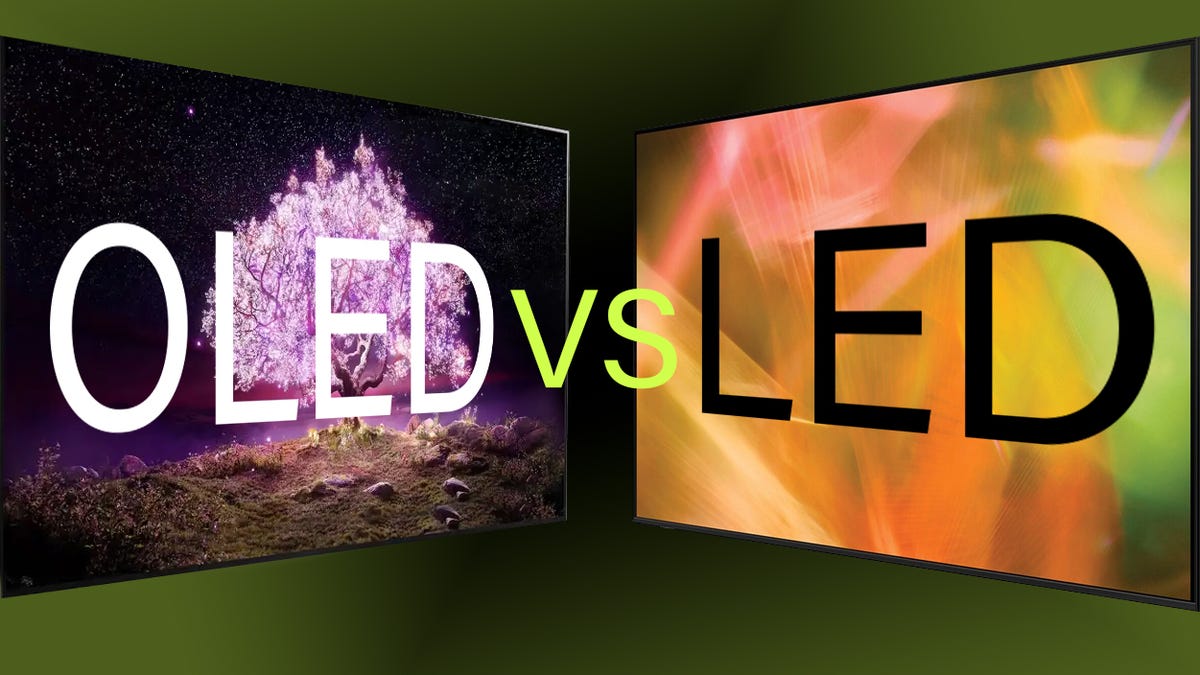 There are tons of variables to consider when shopping for a TV or monitor. From resolution to refresh rate, you might feel like you’re drowning in math while trying to pick a new display or device.

Before you even consider specific variables like those, it’s important to understand the basic technology behind those numbers.

While OLED displays and LED displays are often marketed side by side, they feature very different methods of providing video and backlighting.

This variance plays a huge role in not just the quality of your picture, but also how big or heavy your display is. Read on to find out which of these technologies is best for which purpose, and to discover whether OLED or LED is better for your needs.

The biggest difference between these two technologies is the job or jobs they do and how they do them. LED (Light Emitting Diodes) don’t create the display image. That’s actually handled by a transparent LCD (Liquid Crystal Display) panel. But, since LCDs don’t emit their own light, the panel would look nearly black without the backlighting provided by the LEDs positioned behind or around them.

On older, basic displays, backlights could consist of as few as 10 or less “lighting zones” of LEDs. This often made dark sections of the image look overly lit, or gray, due to the imprecise placement of light. More modern displays offer far, far more lighting zones, sometimes into the thousands. Now, each tiny section of the display can receive precisely light it needs for ideal image brightness and black levels.

OLEDs (Organic Light Emitting Diodes) solve this backlighting conundrum entirely by both creating the picture and emitting their own light. You can think of each individual pixel of an OLED display as a tiny, color-changing light bulb. This makes it able to turn off entirely to provide perfect black levels, or illuminate in any color, or pure white. We’ll cover more about the benefits and drawbacks of this capability in the next section.

You should buy an OLED display or device if…

One of the biggest benefits of OLEDs’ ability to provide their own light is the fact that there doesn’t need to be any additional hardware behind them. This makes it possible to create wafer-thin displays that practically disappear when viewed from the side (as seen above). For TVs, this means thinner, lighter, and, let’s be honest, cooler-looking units that seem like something from the future. For mobile devices, this helps save space and weight, allowing for slimmer, lighter smartphones and tablets.

While OLED TVs and monitors can help lower our power bills by drawing less power than comparably sized LED-lit displays, where OLED technology’s reduced power consumption really makes a difference is in mobile devices. OLED displays can essentially turn off black pixels. This allows your display to use a fraction of the power of an LED-lit display because any completely black portions of it are pretty much drawing no power at all, reducing its drain by a significant amount.

More: The best OLED TVs (and why they’re so expensive)

3. You want the best black levels

As mentioned above, OLED displays can completely turn off individual pixels to provide perfect black levels. Most LED-lit displays let a little light bleed onto pixels that are supposed to be completely black. This leads to that perfect black being a bit more like gradations of dark gray. LED-based displays can improve this by using smaller lighting zones or opting for newer technologies like mini LED (more on this in the FAQ section below) to reduce light bleed, but OLED has eliminated it entirely via its intrinsic ability to provide both color and light on per-pixel basis.

You should buy an LED display or device if…

1. You’re on a tight budget

OLED displays and smartphones can provide some of the most gorgeous visuals you’ve ever seen. But those sumptuous black levels and ultrasaturated colors come at a financial cost. For example, you can expect to pay north of $1,500 for a good, 4K OLED TV in the 65-inch class. Meanwhile, at the time of writing, you can get a 65-inch LED-backlit TV for $550. Will the picture quality be exactly the same? No. But, you could just about buy three of those LED displays for the same price as a single OLED model.

2. You need the fastest refresh rates

This one is for the gamers out there. Competitive gaming is all about chasing the highest refresh rate. This spec defines how many frames per second a display can show. The higher it is, the smoother your gameplay will be, and the faster you can react to onscreen action. This is one area where LED-lit display technologies like VA (Vertical Alignment) or TN (Twisted Nematic) remain ahead. Monitors from companies like Alienware with refresh rates as high as 360Hz, or 360 frames per second, have been available for some time. Meanwhile, the first 240Hz OLED display launched from LG only recently.

More: What is a smart TV, and which are the best?

OLED-based displays can’t generally get as bright as their LED-lit counterparts. Light output, usually measured in nits, typically peaks at around 1,000 for OLED displays. Meanwhile, LED-lit models can go as high as 5,000 to 8,000 nits. It’s arguable whether such extreme lighting would even provide a usable image in most circumstances, but the point is LEDs can get very, very bright when they need to. This is important for things like outdoor TVs, smartphones, and smart watches that you’ll be using outside often, and other displays that will primarily live in very brightly lit rooms.

This depends entirely on the quality and specific technology of the LED display in question. As mentioned above, there are many display panel types that use LED backlighting. If you compare an OLED monitor or TV with a basic LED-lit model using an inexpensive VA panel, the difference will, quite literally, be like night and day. This is because the most striking upgrade provided by OLEDs is their black levels. While the LED panel will look gray in dark areas, the OLED panel will look pitch black. However, the same comparison using a QLED or microLED panel will be a different story, as we’ll explain below.

In the coming months and years, look for LED lighting to continue eroding the advantages of OLED models. Innovations in LED displays are already coming very close to matching the black levels, slimness, and other advantages of OLED displays, while also typically being at least somewhat cheaper. This trend should continue until LED tech has met or exceeded OLED’s benefits.

Meanwhile, OLED technology will likely continue to grow in two key areas: affordability and flexibility. To the first point, popular OLED models in smaller sizes (42-inch to 55-inch TVs) can now be had for less than $1,000, where they were several thousand dollars just a handful of years ago. This pricing decline will likely continue as OLED manufacturing continues to advance and competition grows. What will likely remain pricier for the foreseeable future are flexible OLED displays. Smartphones like Samsung’s Galaxy Z Fold 4 and Galaxy Z Flip 4 already use foldable OLED displays. Concept designs with other folding configurations, rollable displays, and even stretchable displays are all also being worked on, all using OLEDs.

No. QLED displays, largely pioneered by Samsung, are essentially a subset of LED-lit displays. They use the same LED-based backlighting technology with the addition of “quantum dots,” hence the Q. These dots function like liquid crystal displays, providing only the color for each pixel. They still require LED backlighting to be visible. That said, advancements in recent years have improved QLED displays to the point where they can achieve some very impressive results that, for some, come very close to visually matching OLED panels.

MicroLEDs are essentially an attempt to create LEDs so small they can light individual pixels. The result is a display that can use LCD or quantum dot technology, but match OLED’s ability to completely disable lighting on a pixel-by-pixel basis for perfect black levels. While there are no commercially available models with this pixel-perfect technology out just yet, displays like Samsung’s Odyssey Neo G9 gaming monitor already employ “miniLED” backlighting that provides that display with 2,048 individual lighting zones for highly precise backlight control. For references, microLEDs would need to offer something like 8.2 million LEDs, one for each of the pixels in a 4K display, to truly match the individual pixel lighting of a 4K OLED panel. Manufacturers like Samsung are already applying “Micro LED” branding to some ultra-premium models, but none have achieved this level of per-pixel miniaturization just yet.

Gmail Rolls Out Package Tracking Features to Inboxes in the US

Feeling low? Bhagyashree has an uplifting message for you. Watch