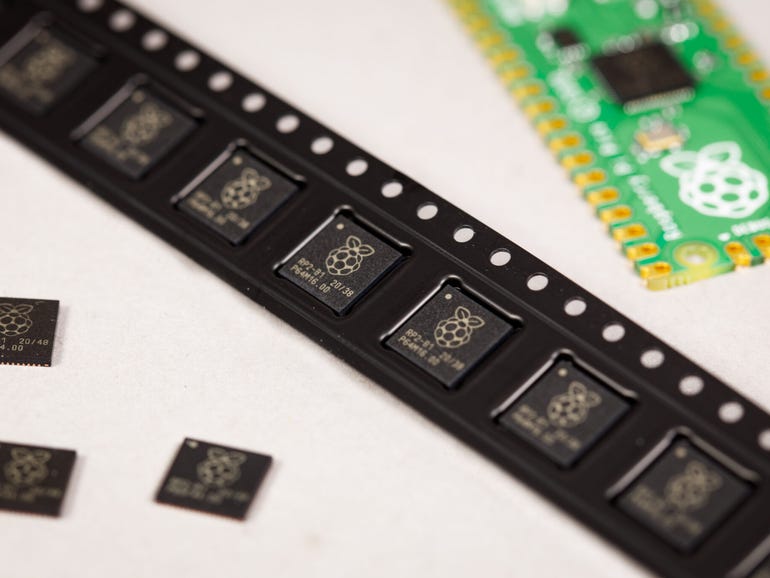 The ARM-based RP2040, its first microcontroller, was available for $1 a piece when it launched in June, but can now be bought in volume at sizable discounts.

It features two Cortex M0+ cores, 264KB of on-chip RAM, and support for up to 16MB of off-chip flash memory via a QSPI bus. It was built from TSCM’s 40nm process and is available as a component for the low-powered Pi Pico board or other projects.

SEE: What is digital transformation? Everything you need to know about how technology is reshaping business

RP2040 is a stateless device, but to run programmable code it has support for 16MB of off-chip Flash memory for cached QSPI memory via a QSPI bus.

The RP2040 is still available in small quantities for $1 per unit. However, for larger scale projects in need of thousands of chips, the new Raspberry Pi Direct direct-to-business online store is launching with just two products on offer.

In a blogpost, Raspberry Pi CEO and co-founder Eben Upton notes how the global semiconductor shortage has affected demand.

“But as RP2040 products begin to ramp to scale, and the global semiconductor shortage has transmuted most other microcontrollers into unobtainium, we’ve started to see people asking to buy tens of thousands of chips at a time,” writes Upton.

The company’s main product, the Raspberry Pi 4, isn’t immune to the semiconductor shortage either. In October, prices rose for the time in Raspberry’s 10-year history of selling the single compute boards. Today, multiple resellers list 2GB, 4GB and 8GB Pi 4 models as out of stock. Pi fans on Reddit report Raspberry Pi 4 devices being sold at “crazy prices” via non-official channels or that official local resellers have been out of stock since before Christmas. ZDNet has asked Upton for an update about supply issues affecting the Raspberry Pi 4 and will update the story if it receives a response.

However, Upton assures people with microcontroller projects that the RP2040 shouldn’t suffer the same shortages, with enough wafers to make 20 million chips.

“RP2040 is built on a more modern semiconductor process (TSMC 40LP) than most other microcontrollers. As a result, it makes extremely efficient use of scarce silicon wafer supply: each die occupies just 2mm2, and each 300mm wafer yields roughly 21,000 dice. We have sufficient wafer stock on hand to produce 20 million chips, with more on the way,” says Upton.

“If you want to build your product on a microcontroller you can actually buy in 2022, RP2040 is your friend.”

Avatar 2 Leaked on Torrents Ahead of Release in India

Watch the First Trailer for the Peripheral, Releasing October 21