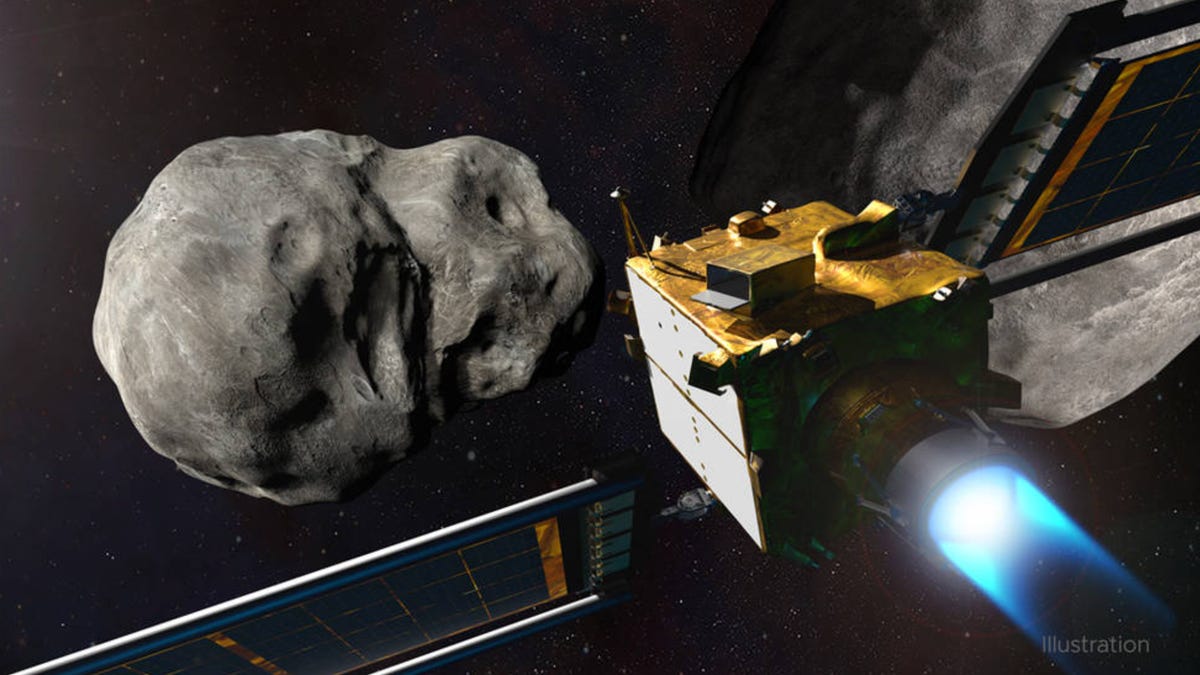 NASA is sending a 1,320-pound spacecraft to smash into a never-before-seen asteroid to change the asteroid’s trajectory. Does this sound like your typical sci-fi movie plot in which an asteroid is hurtling towards Earth and threatening humankind? Well, the targeted Dimorphos asteroid is NOT a threat to humanity in any way. However, this mission is intended to prepare us for that potential threat.

“DART is turning science fiction into science fact and is a testament to NASA’s proactivity and innovation for the benefit of all,” said NASA administrator Bill Nelson.

The Double Asteroid Redirection Test (DART) mission is meant to test the technology that could defend Earth from being struck by potential asteroid or comet hazards in the future. You do remember the dinosaur incident, right? NASA says humankind won’t have the same fate.

“The dinosaurs didn’t have a space program to let them know what was coming, but we do,” Katherine Calvin, chief scientist and senior climate advisor for NASA, said at a briefing on Thursday.

The mission will send a spacecraft at four miles per second toward Dimorphos, a moon orbiting the near-Earth asteroid Didymos. Once it makes contact, the kinetic impact will change the trajectory of the Dimorphos asteroid.

The mission will draw on a wide range of NASA technological innovations to both complete and study the mission.

Also: NASA: This is the weird sound of a meteoroid hitting mars

The spacecraft will carry a sophisticated guidance, navigation, and control system, called Small-body Maneuvering Autonomous Real Time Navigation (SMART Nav), in addition to the Didymos Reconnaissance and Asteroid Camera for Optical navigation (DRACO) camera, to stay on its course and navigate its way through space.

NASA said the SMART Nav software is brand-new and was created specifically for the DART mission.

DRACO will provide the SMART Nav with images, and then the SMART Nav will collect and process these images using computational algorithms to determine the spacecraft’s course, according to NASA.

In addition to helping the mission stay on track, DRACO will take images throughout the flight and send them back to Earth at a rate of one per second. NASA will stream these images on a live broadcast on NASA TV.

Also: NASA DART Mission: How to watch a spacecraft smash into an asteroid

NASA assured its audience that the images will be “something spectacular” in a briefing on September 12.

To test the SMART Nav system before the launch, on July 1 and August 2, the mission operations team pointed the DRACO imager to Jupiter, according to NASA. NASA said the SMART Nav team gained valuable experience from the test.

“The Jupiter tests gave us the opportunity for DRACO to image something in our own solar system,” said Carolyn Ernst, DRACO instrument scientist at APL, in a blog post. “The images look fantastic, and we are excited for what DRACO will reveal about Didymos and Dimorphos in the hours and minutes leading up to impact!”

NASA reassured reporters on Thursday that the DRACO camera is in great shape for launch.

“We have over 200,000 images already on the ground from DRACO,” said Elena Adams, the DART Mission systems engineer for Johns Hopkins APL.

The ability to see the images is a big deal, since no one will have ever seen the Dimorphos asteroid before the collision – not even NASA.

“Dimorphous is a tiny asteroid that we have never seen up close,” Tom Statler, DART program scientist at NASA, said during the briefing.

A big component of the mission, in addition to testing whether the asteroid is capable of reaching the target, is determining the reliability of the approach, assessing how best to apply it to future planetary defense scenarios, and determining how accurate the computer simulations are and how well they reflect the behavior of a real asteroid, says NASA.

To see how much the asteroid actually moves, the team will be harnessing the power of its telescopes, including the James Webb Space Telescope, Hubble Space Telescope, and Lucy Space Probe.

The NASA team is very confident that the mission will go according to plan, telling reporters that the rehearsals and simulations have prepared the team for this momentous occasion.

Also: NASA picks a firm to build its next-gen spacesuits

“All subsystems on the spacecraft are green,” said Edward Reynolds, DART project manager, during the briefing.

To tune in and watch the mission on Monday, you have two different options: a live broadcast and a quiet live feed of the Didymos Reconnaissance and Asteroid Camera for Optical navigation (DRACO) camera.

Debina Bonnerjee does headstand in third trimester as Gurmeet Choudhary watches, Ruslaan Mumtaz says ‘you are so fit’

How Bayer is Pioneering Technology to Help Fight World Hunger