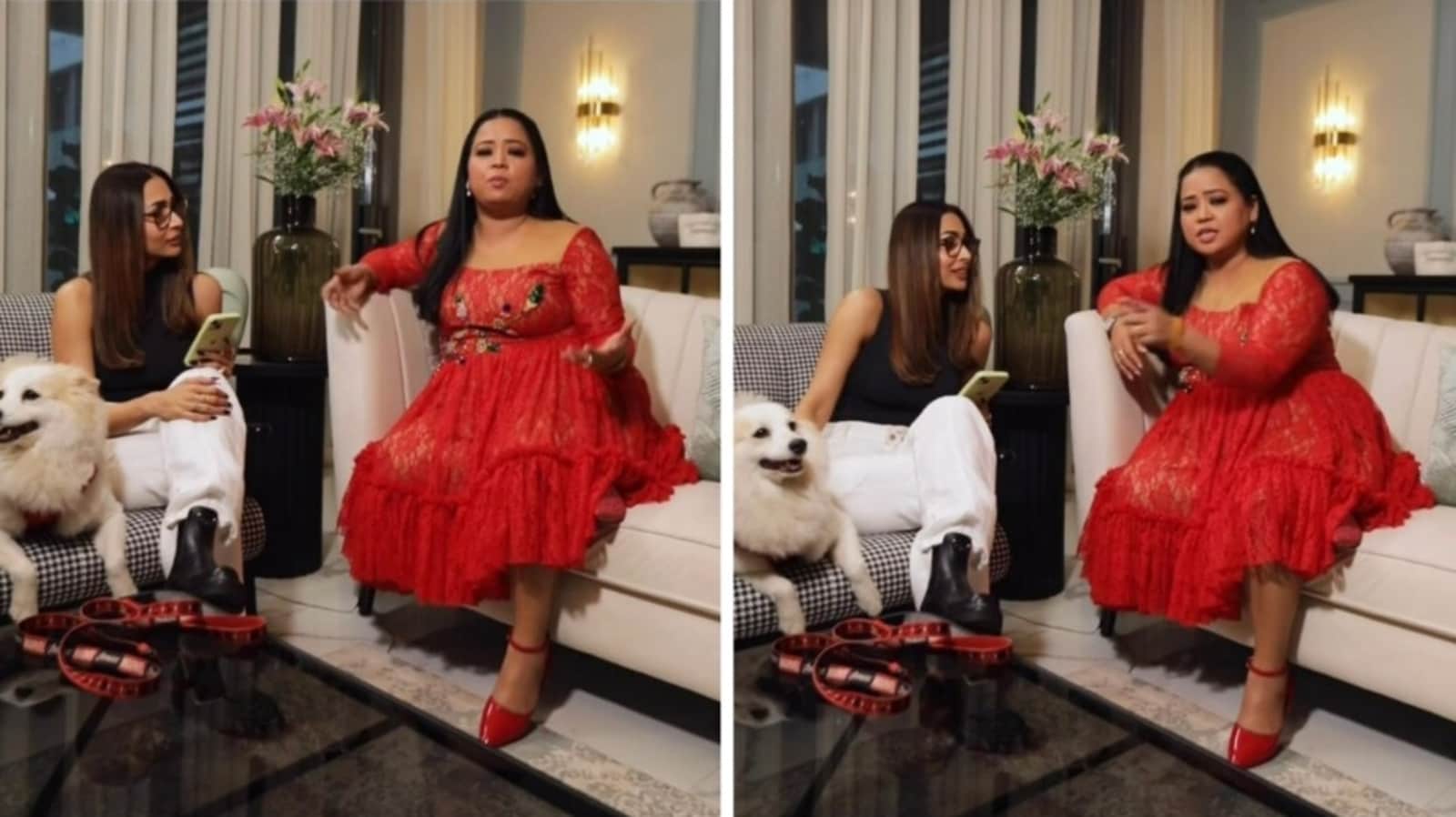 In the video, Bharti wore a red outfit with matching heels. Malaika wore sleeveless black tee with white pants. She kept her hair untied. Her dog sat with her on a sofa. Bharti said in the beginning of the video, “Ek show hona chaiye jisne troll kiya woh saamne bhaithe hone chaiye, taaki unke saamne baja sake (There should be a show for all those who troll, they should sit in front of us so that we can talk to them).”

Malaika read out a comment from her smartphone which said, “What clothes are you wearing at this age?” To which Bharti responded, “Tum kya inke baap lagte ho kya, woh jo marzi pehne. Unki body hai. Kabhi patle logo pe baat, Kabhi mote logo pe baat. Tum log velle ho kya? Koi kaam nahi karte kya (Are you her father? She can wear whatever she feels to, it’s her body. You always target skinny and fat people. Don’t you have any work, are you so jobless?)”

Then Malaika, read out another comment, “Aunty go home and rest.” Immediately, Bharti said, “Kisne kaha aunty (Who called her aunty?).” The comedian also responded to those who Malaika pictures as photoshopped and fake and said, “Aapko kisne kaha photoshopped hai. Aapko itni hi knowledge hai social media ki, cameras ki, photos ki toh wo kaam karo na jaakr bhai, idhar kya kar rahe (Who said that her pictures are photoshopped. If you think you are an expert in this field, then please go and get a job. What are you doing here)?”

Malaika continued further and read out a comment for her body, “So fat, so fake.” Furious Bharti, responded, “So fat! So fake!” isko lekar jaa sakti hoon inke ghar (Can I take your dog to their homes)?”

Sharing the video on Instagram, Malaika wrote, “Koi kahe..kehta rahe..aur hum jawaab bhi na de? (People are saying, they will keep on saying and we are not allowed to answer them). Why should trolls have all the fun?” Reacting to the clip, one of her fans wrote, “Hahah nice.” Another commented, “Love you Bharti (red heart emoji).” Other fan wrote, “Nailed it.” Many fans praised Bharti’s responses and dropped heart emojis.

Moving In With Malaika promises to show Malaika’s life unfiltered. Her friends and family will be appearing on the show as guests. Karan Johar, Nora Fatehi and Farah Khan marked their presence on the show.

5G Spectrum Auction in India to Be Held in June, Says Telecom Minister

Zakir Khan says he will say sorry if anyone gets offended with new shows: ‘I am a zero conflict person’