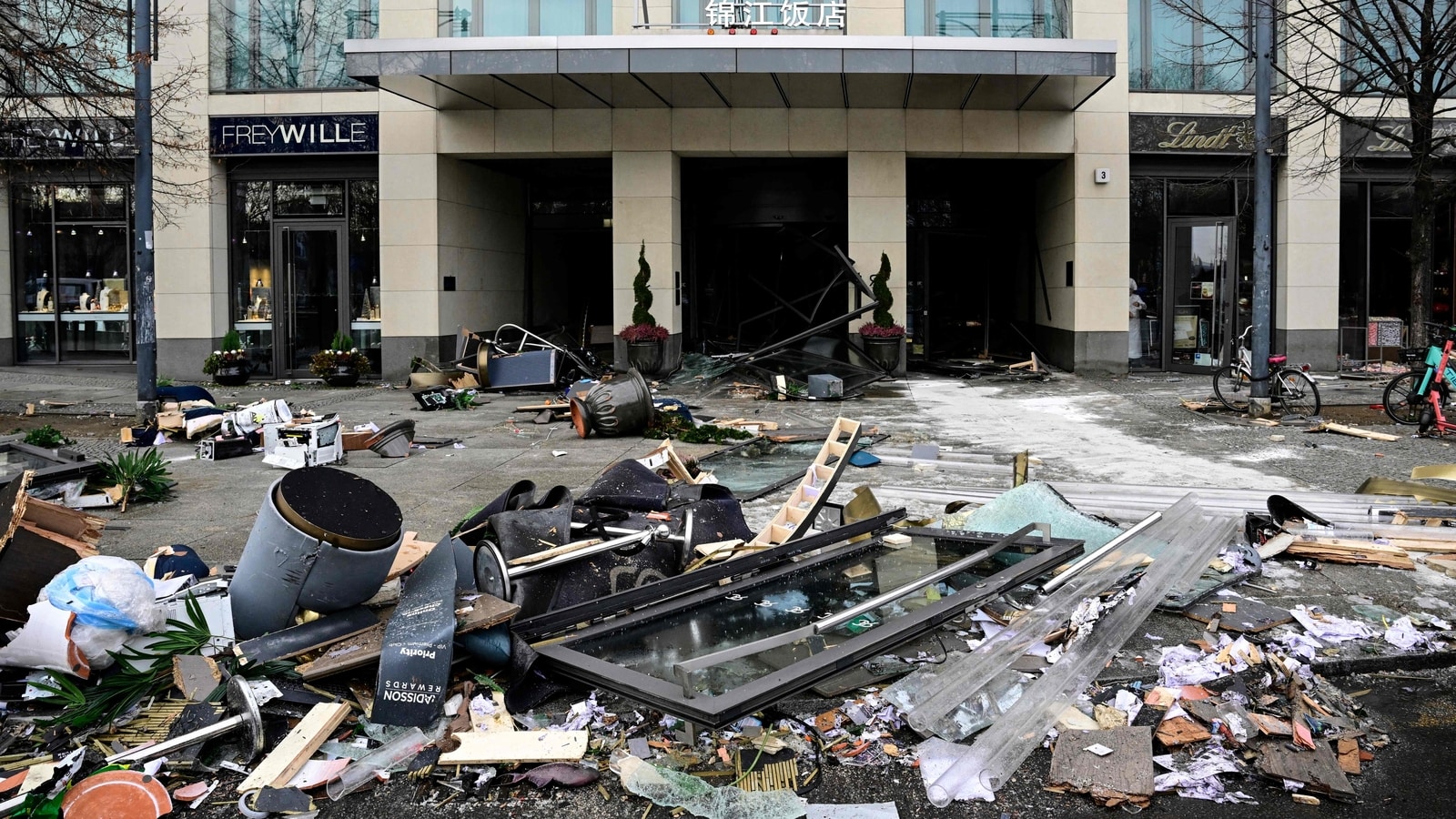 BERLIN (AP) — A massive aquarium at the AquaDom tourist attraction in the centre of the German capital of Berlin exploded early on Friday. The explosion led to the spilling of debris, water, and hundreds of tropical fish.

A portion of the building, which houses a hotel, cafes, and a chocolate shop, was reportedly damaged as 1 million litres (264,000 gallons) of water leaked from the aquarium just before 6 am, according to the police. As per Berlin’s fire department, two people had minor injuries.

AquaDom owner company, Union Investment Real Estate, said in a statement Friday afternoon that the reasons for the incident were “still unclear.”

Mayor Franziska Giffey said the tank had unleashed a “veritable tsunami” of water, but the early morning timing had prevented far more injuries. Despite that, about 300 guests and employees had to be evacuated from the hotel surrounding the aquarium, police said.

She said, “despite all the destruction, we were still very lucky.” She further added, “we would have had terrible human damage” had the aquarium burst even an hour later, once more people were awake, she said, in the hotel and the surrounding area.

Although Union Investment Real Estate revealed on Friday that the tank component of the attraction had a height of 14 metres, AquaDom’s website claimed that it was the largest cylindrical tank in the world at the height of 25 metres.

There was a hypothesis that the acrylic glass tank cracked overnight due to the freezing weather, which dropped to minus 10 degrees Celsius (14 degrees Fahrenheit). The tank subsequently collapsed as a result of the weight of the water. Police reported finding no proof of a criminal act.

The Berlin Mitte district administration verified through Twitter that almost all of the 1,500 fish that were inside at the time of the rupture had died but added that “a few fish at the bottom of the tank” might still be alive. It hosted 80 different kinds of fish, including the blue tang and clownfish and two vivid fishes that looked like characters from the film “Finding Nemo.”

Take a look at the tweets by Berlin Mitte district here:

The day was spent by veterinarians, firefighters, and other officials who worked to save 400 to 500 smaller fish from another set of aquariums located beneath the hotel lobby. Officials claimed that without electricity, their tanks were not getting the oxygen they needed to thrive. They were transferred to other tanks in the adjacent Sea Life aquarium.

“It’s a great tragedy that for 1,500 fish, there was no chance of survival,” said Almut Neumann, a city official in charge of environmental issues for Berlin’s Mitte district. “The focus in the afternoon was clearly on saving the fish in the remaining tanks.”

The Berlin Zoo was one of many groups that offered to take the remaining fish. The AquaDom’s proprietors have been approached for more information, according to aquarium operator Sea Life, who expressed sadness at the tragedy. According to the statement, what happened with the AquaDom was “unique and unprecedented,” and the displays at Sea Life were not at risk of suffering a similar fate.

Sandra Weeser, a German lawmaker who was staying in the hotel, said she was woken up by a large bang and thought there might have been an earthquake.

“There are shards (of glass) everywhere. The furniture, everything has been flooded with water,” she said. “It looks a bit like a war zone.”

Trucks started removing the rubble that had poured out onto the roadway in front of the hotel many hours after the event. The area in front of the building where the chocolate shop was wrecked was covered in brightly coloured Lindt chocolate wrappers. From behind the police line across the street, a small group of tourists and passersby took pictures of the scene.

Animal rights group PETA tweeted Friday that the aquarium became a “death trap” for the fish housed in it. “This man-made tragedy shows that aquariums are not a safe place for fish and other marine life,” the group wrote.

Berlin’s aquarium, which had its most recent renovation in 2020, is a popular tourist destination. One of the delights of the attraction was the 10-minute elevator ride that went through the tropical tank.

Iva Yudinski, a tourist from Israel, said she was shocked by the incident “just yesterday, we watched it, and we were so amazed (by) its beauty,” she said. “Suddenly, it’s all gone. Everything is a mess, a total mess.”

Sony and Netflix Are Working on a Horizon Zero Dawn Series: Report