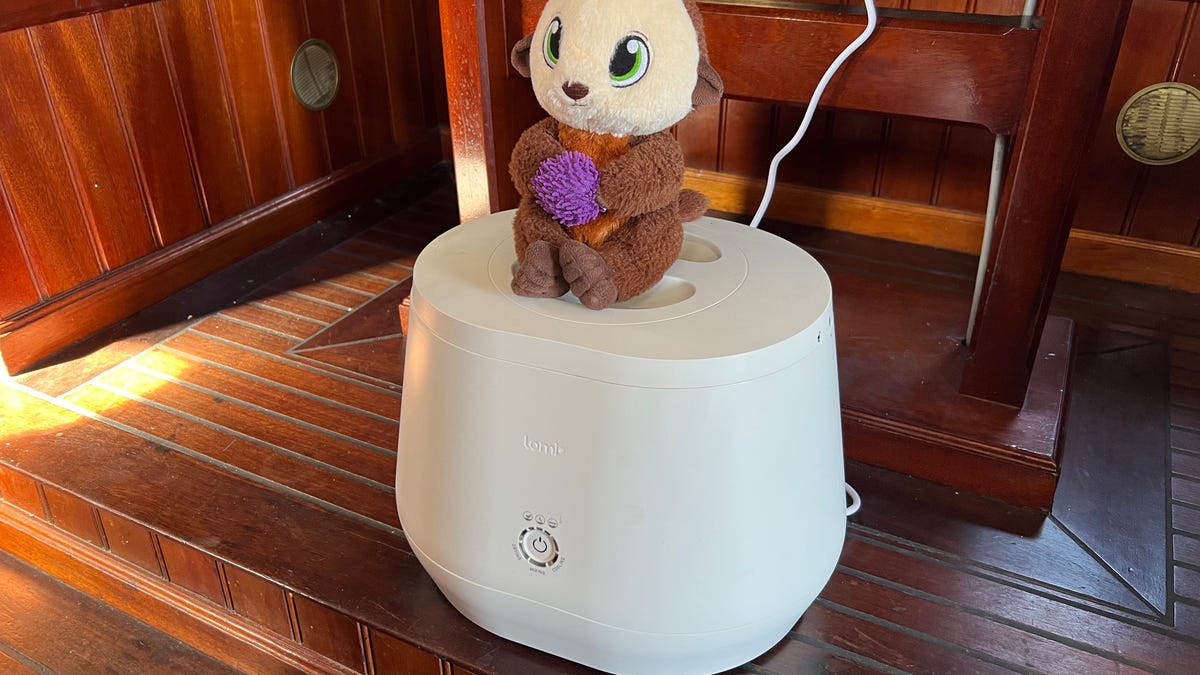 I’m a convert. My wife pushed for the indoor composter. Since we live on a boat and space is at a premium, it took me a while to get my head around the idea. She was right.

If you’re tight on space and need to do better with your food waste, Lomi is a great solution.

The Lomi composter by Pela Earth represents a real breakthrough in ease-of-use and convenience in indoor home composting, and it solves a big problem when it comes to the inevitable food waste associated with our two little kiddos. What it does still seems like magic to me: With a mix of heat, agitation, and maybe pixie dust (I assume) it turns a bin full of food waste into a small handful of usable dirt in a matter of hours.

Is a home composter right for you? To answer that question we’ll take you through the ins and outs of using the Lomi, which I’ve done daily for the last month.

Lomi accelerates the composting process by using heat and abrasion to break down food waste, approved bioplastics, and packaging. Lomi cycles are a multi-step process within a small machine, designed to mimic natural composting at every stage.

The first stage is grinding. Naturally, you’re going to hear this, and it’s worth pointing out here that Lomi makes some noise. It’s nothing you can’t have a conversation over, sort of akin to a bread machine in its knead mode. But grinding is essential for the composting process. Smaller food pieces are easier to break down than larger chunks, since increased aeration and surface area make it easier for microorganisms to break down the waste.

Also: I tested the Insta360 Go 2 action cam on my WWII-era sailboat. It blew me away

Next, a heating and cooling cycle begins to break down food. The machine mimics nature’s mesophilic (moderate-temperature), thermophilic, (high-temperature phase), and cooling phases, but it accomplishes in a few hours what takes nature several months. Internal sensors ensure proper moisture content, warm temperatures, and plenty of oxygen for natural decomposition. The three Lomi modes — Eco-Express, Grow, and Lomi Approved — do this at varying speeds, which impacts the final product and what you’re able to do with it.

My kids, at least, are sticking with the magic story. They’ve nicknamed the Lomi “Princess Food Crusher” and they enjoy giving her their unwanted leftovers.

The device isn’t small, which is a consideration when it comes to limited counter space. Since we have no spare counter space to speak of aboard Lindy, our WWII era sailboat, we keep ours under the table in our salon. That makes it convenient to deposit food scraps from the inevitably hectic weekday breakfast rush followed by dash to school.

Also: How to prevent food waste

Prior to first using your Lomi, you need to fill two filters with activated charcoal, which comes with the device. The charcoal pellets are a menace if allowed to get loose, leaving black streaks on anything they touch. Pouring them into the Lomi’s filters isn’t complicated but I found it tricky not to make a mess thanks to the charcoal dust.

The charcoal should be replaced every three months to keep Lomi smelling fresh. That’s an added expense potential buyers should be aware of. At time of this writing a 90 cycle supply of charcoal from Pela Earth costs around $50 on subscription (or around $55 without).

Once the charcoal is in, you just plug in the Lomi and you’re in business.

This is the real revelation for me. Like many consumers who strive to be environmentally conscientious and sometimes come up short, I find myself wincing whenever I throw food waste in the trash.

A big part of the problem is that there’s no residential food waste program in Marina del Rey, where we live, which means food waste most commonly ends up in the landfill. As Pela Earth is quick to point out, food waste is the single most common material landfilled and incinerated in the United States, comprising 24% and 22% of landfilled and combusted municipal solid waste. And, 50% of the volume of waste that North Americans send to landfills each year is compostable materials.

Lomi is an alternative to throwing food waste in the garbage.

Also: How to cut your grocery bill by shopping online

We use it essentially as a waste bin for food and green scraps. It lives under our table and whenever the kids can’t be enticed to finish a meal or there’s leftover peels or scraps from dinner prep, in it all goes. When the bucket is about 75% full, demarcated internally by a scribed line, we run the Lomi, which is as easy as pressing a button.

We typically run the Lomi in Eco-Express mode, which takes about 3-5 hours. Because the resulting product has vastly less bulk than what we put in, we leave the dirt in and put new food waste on top of it. Lomi recommends running no more than three cycles per bucket-full.

Lomi recommends adding a mix of different food waste. Here’s a helpful breakdown of different items that permitted in general and in various modes.

Which mode to use?

There are three modes, Eco-Express, Lomi Approved, and Grow. The differences are important and help to illustrate exactly what it is you’re making with the Lomi. (Hint, it’s not compost.)

Eco-Express mode is the fastest and takes about 3-5 hours. You can add the resulting dirt to your green-bin or do what we do and add it to the next cycle that you run with Lomi.

Lomi Approved: This mode is meant for food waste, bioplastics and Lomi Approved packaging and products. Lomi recommends using a LomiPod in this mode, which adds beneficial microbes to help aid the process of breaking down the bioplastics. This mode takes about 5-8 hours. The resulting dirt can be tossed in the green bin, but like the Eco-Express dirt it isn’t rich in microorganisms and shouldn’t be used with plants.

Grow Mode: This mode is meant for use with fruit and vegetable waste only. So no cooked or processed foods and no bioplastics. This mode utilizes low heat to help preserve microorganisms. Lomi recommends adding a LomiPod in this mode. The benefit is that the resulting dirt can be mixed with garden or houseplant soil. Lomi recommends a ratio of 1:10 dirt to soil.

How much power does Lomi use?

Pela Earth reports that Lomi uses between 0.6 to 1.0 kWh per cycle. This is a chart providing energy usage statistics for each mode.

Indoor composters aren’t without controversy, and a big question is whether the Lomi truly provides an eco benefit or whether this is just a green washing gimmick.

Remember, the big environmental benefit of composting is reducing the food waste that ends up in landfills. The crux of the skepticism is that Lomi uses a certain amount of power to turn food waste into dirt, potentially negating any positive impact.

Also: The best affordable EVs and how the federal tax credit can save you $7,500

Lomi has fought this perception aggressively by enlisting third-party services to determine if Lomi dirt offsets the electrical demands of running the device. The tests factor in variables including whether the home uses renewable energy or not (e.g., solar power) and what folks do with the dirt at the end of the cycle (i.e., use it for backyard plants, place it in a green bin, or send it to a landfill).

With the help of our third party audits, we found that despite the electricity consumed, Lomi can produce a net-lower carbon footprint than that same organic waste going to landfill.

You can read more about the results of these tests here, but the bottom line is a net CO2e savings of approximately 100 kg to 230 CO2e per year, depending on your usage patterns.

We use it everyday. As I sit and type this the Lomi has just completed another cycle. So for us, the bottom line is that this product is a big win.

Is it right for you? Look, ideally you’re not generating the amount of food waste we are. (And we try hard not to, I promise!) If you live somewhere with a yard or nearby common space, then you should probably explore conventional composting options first. They’ll be cheaper and are more environmentally friendly. Lomi can successfully be used in coordination with a typical composter, but that’s not our use case and you’ll have to determine if it’s worth the expense for you or not.

But if you live in an apartment or other small space, like our boat, and if food waste is a problem for you, I definitely recommend Lomi. It’s pricey but will quickly become the appliance you didn’t know you needed. Pela Earth is an eco-conscious company and Climate Neutral Certified, and Lomi is a robust product that seems like it’ll keep functioning as intended for a long time.

If you’re tight on space and need to do better with your food waste, Lomi is a great solution.

Slightly cheaper than the Lomi, it’s a comparable product in a different form factor.

The grandaddy of traditional outdoor composters, if you have the space and the waste, this is a big ol’ growing machine.

Horizon Zero Dawn PS5 Remaster Is Reportedly in the Works

You’re stuck with the Gmail redesign starting this month