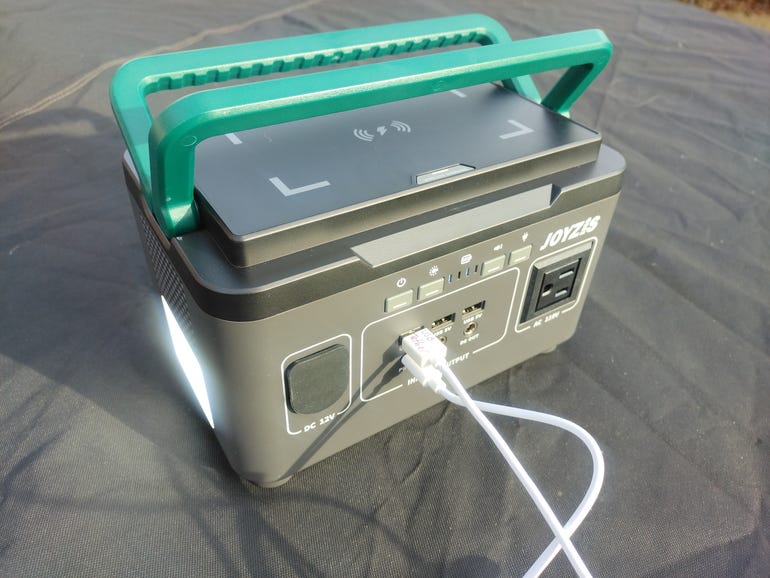 is the smallest portable power station I have reviewed. According to my scales, the size is 5.77 x 5.63 x 8.89 inches and weighs just over 7lbs.

— but at a far lower price point and will keep your devices charged when out on the road.

Yet this compact power station will deliver power to up to eight devices simultaneously, including the wireless charging, DC, and AC ports. The dual carrying handles fold down flat when not in use and provide a flat surface holding six drink cans. This surface is also a wireless charging pad which is activated by the switch on the top of the power station.

The BR300 has a capacity of 296Wh, or 80,000mAh if you think of it in terms of mobile device batteries. This means that it has 20 times more battery capacity than your 4,000mAh phone battery.

All of its input and output ports are on the front of the device. There is a DC 12V port, a cable, a quick charge USB 3.0 port with two USB Type-A ports, one 110V AC output and a DC port in and out.

There is also a USB Type-C port which is a PD 60W port — this needs to be used with a Type-C 60W PD fast charge cable.

On both ends of the unit are lights. One light is fixed with an LED light used for reading or ambient lighting. The other is at the other end of the power station and provides a fixed light — a rapidly flashing light or SOS pulses.

The operating buttons are simplistic. The main power switch on the left and a reading light switch followed by a power indicator.

This indicator has four LED lights that flash whilst the unit is being charged and stay steady when the BR300 is fully charged.

When three bars are lit, the charger is 75% charged, going to a 25% charge state when one bar is lit. Next to the indicator, there is a switch for the light on the right-hand side of the unit and an AC switch.

The BR300 has an output of 3000W — be aware that there is no surge protection on this battery. If you try to use an electrical device that has a startup surge greater than 3000W, then the BR300 might switch itself off to protect itself.

I could not find any indication anywhere that the product has surge protection, overload protection or short circuit protection. However, it does have overheat protection.

I used it for about two hours, charging all my devices and using both lights. The onboard fan started running and continued for 15-30 seconds to cool the unit down and cycling periodically whilst the lights were on.

The BR300 has no IP rating, so be cautious when using it in dusty or wet areas (the user guide states that the product must not be used in wet areas).

Joyzis intends to offer a solar panel to charge the BR300, but I did not receive a panel to review, and although this is mentioned in the user guide, Joyzis said that the solar panel is not yet available to buy from its site.

I found that the BR300 will charge from flat in under three hours when using the PD60W mains adapter.

It is a useful little power station at a fairly low cost.

You do need to ignore the incorrect size and weight information online and try one of these out for yourself. It will keep your devices charged in an emergency, give you options for power delivery and will give you over 10 hours of light when you need it.