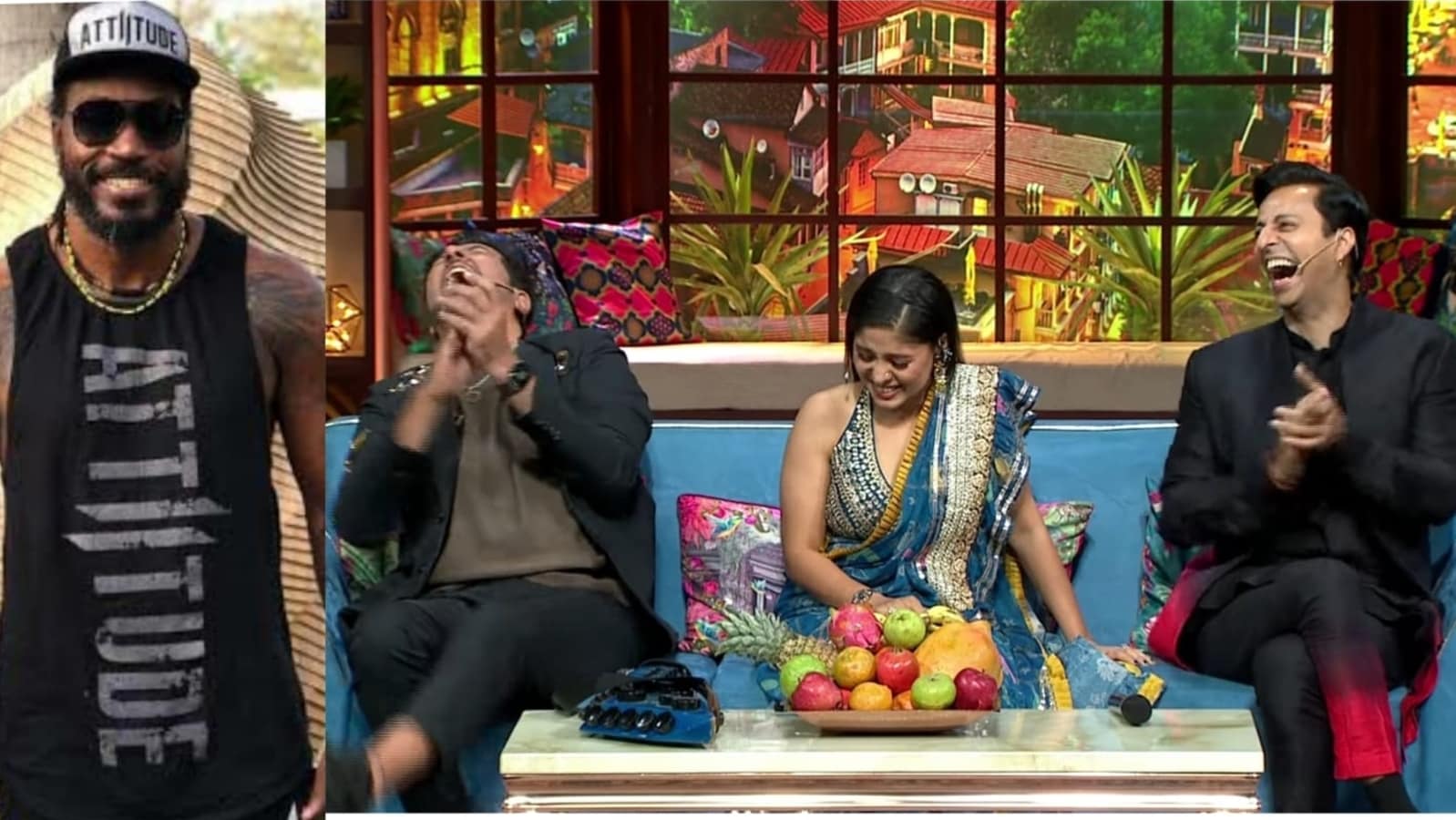 During a section of the episode, Kapil read out comments on social media posts of the guests, usually to incite laughter. However, in this episode, some of the comments involved seemingly insensitive ‘jokes’ at Jamaican cricketer Chris Gayle, who plays for the West Indies and is a popular figure in India.

On a picture where Sulaiman was standing next to Chris Gayle, Kapil read out a fan comment in Hindi. “Sulaiman sir, one can recognise you but did a bomb explode on Salim’s face,” read the comment, perhaps refering to the cricketer’s complexion. Salim and Sulaiman laughed heartily while clapping. Sunidhi and the show’s permanent guest Archana Puran Singh were also seen laughing at the joke.

After this, Kapil read another fan’s response that had informed the first person that the person was Chris Gayle and ‘woh ache ache bowlers ko dho daalta hai (he bashes all the good bowlers)’. To this, another person commented on Chris’ skin: ‘Toh khud ka mooh kyun nahi dhota (why doesn’t he wash his face then)?’ Again, the guests laughed at this. Another comment attributed Chris’ ‘tan’ to the fact that he probably ‘lived near a beach’.

To many, comments on skin colour in India are harmless jokes. The notion that ‘Indians can’t be racist’ has been raised several times. In June 2020, Chris Gayle’s West Indies teammate Daren Sammy had alleged that several Indian players had subjected him to racist jokes and nicknames during his time in the Indian Premier League. Taking to social media, Daren had said that several players used nicknames for him based on his skin colour. Talking about how he discovered the word’s real meaning upon hearing about it in a bit by Hasan Minhaj, Daren wrote, “I was angry after listening to him describing a word that they use to describe black people, which he was saying is not in a good way … and it was degrading.”

This had sparked denials from many in the country, who continued to maintain that since Indians aren’t white, they can’t be racist. It was Chris Gayle who had backed Daren at that point, when he tweeted to him, “It’s never too late to fight for the right cause or what you’ve experienced over the years! So much more to your story, @darensammy88.”

But many called out the existence of racist tendencies within the country, particularly how celebs stay away from talking about it. In 2020, model-turned-actor Lin Laishram had told Hindustan Times, “They are not aware about it. They spoke up about George Floyd’s death in the US but when it comes to racism in our own country, they don’t talk about it. I wonder why! May be since we are in showbiz, a lot of celebs tend to pick up more popular topics to talk about. I don’t know what they think but it should be spoken about more.”

In 2020, Chris Gayle had himself admitted that he had faced racist comments during his career but did not specify if the incidents had taken place in India. “Racism is not only in football, it’s in cricket too. Even within teams as a black man, I get the end of the stick. Black and powerful. Black and proud,” he posted on Instagram in solidarity with the Black Lives Matter movement.

Also read: Axone actor Lin Laishram: There is racism in our own country also, why don’t celebs talk about that?

The Kapil Sharma Show has also had its fair share of controversies over the years. Recently, actor Mukesh Khanna had said he did not participate in it since it was ‘cheap and worst’. Writing on his Instagram in Hindi, he said that the show is “full of cheapness, full of double meaning words, taking a turn towards vulgarity with every moment.”

Another thing to notice is how these ‘funny’ comments appear on a celebrity’s post right around the time that their Kapil Sharma Show episode is taped. In this case too, the picture was posted in 2018 but the comments picked up were posted just five weeks ago. Maybe @guls.hankumar798 needs to be a bit more discreet. Or the simpler thing to do: be a bit less racist. Kapil Sharma can also take notes.

Watch the Trailer for Marvel’s Werewolf by Night, Coming October 7