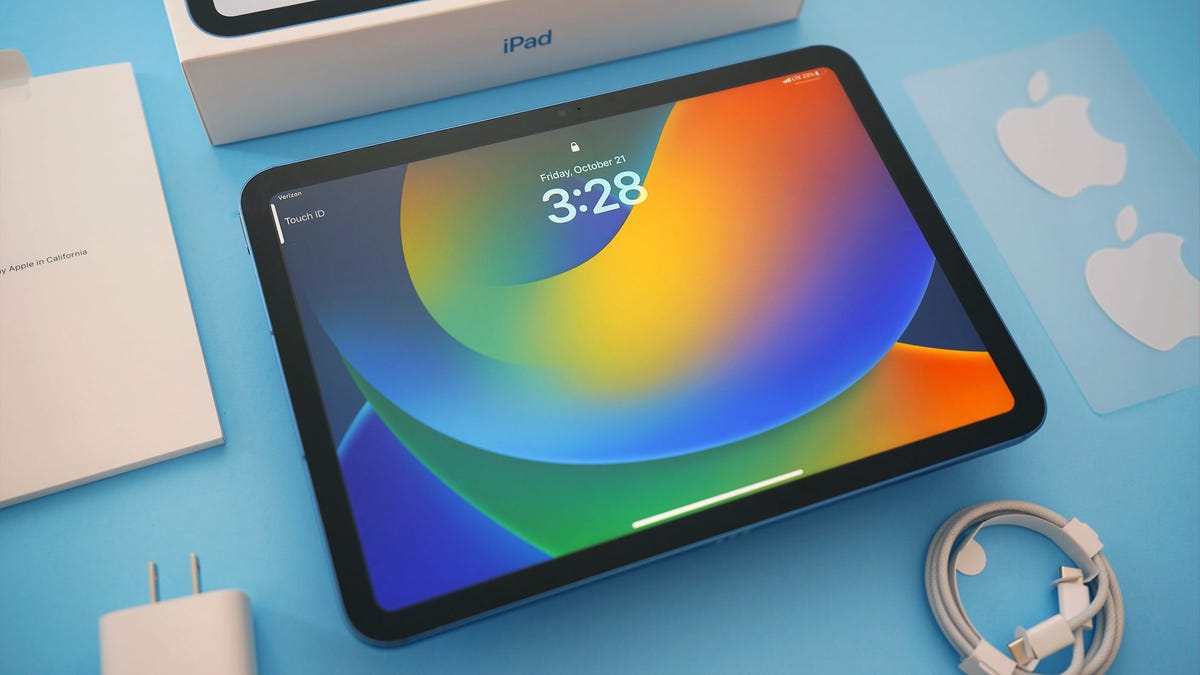 Apple is back with a new iPad, the 10th-generation model, which boasts symmetrical bezels, a larger 10.9-inch display, Magic Keyboard Folio support, and the latest software version, iPadOS 16.1. But unlike previous standard iPads, it now costs $449. Ouch.

If the goal of the revamped design is to sway potential buyers downmarket, then it may all come to fruition this holiday season.

At a time when consumers are cutting back on spending, raising the price of your most affordable iPad line is certainly one way to get attention — or lose it. But after spending the past week with the 10th-generation iPad, I can’t help but accept that Apple, somehow, has managed to justify the $120 upcharge. In several ways, the regular iPad even beats out the Pro.

That’s another way of me saying that this year’s iPad lineup is more confusing than ever before. The vanilla iPad looks nearly identical to the iPad Air, gets several features that are excluded from the iPad Pro, and Apple is still selling last year’s $329, home-button-equipped iPad in stores.

ZDNET’s buying guides will help you sift through the madness come holiday shopping season, but for this review, it’s all about why and why you shouldn’t buy the latest iPad (10th Gen), so let’s talk about that.

Also: Don’t know which iPad is good for you? We break it down

Design gets a breath of fresh air

Since the expansion to Pro, Air, and Mini models, the standard iPad has always been playing catch-up on the hardware side of things. That changes this year. In lieu of the front-facing Touch ID and home button, the new iPad has thinner bezels surrounding a larger 10.9-inch Liquid Retina display, the fingerprint sensor has been moved to the outer edge, and dual speakers flank the left and right sides when the tablet is held in landscape orientation. The whole package weighs approximately one pound.

Had this been an iPad Air review, everything that I just listed would still apply. The two models are identical in these regards, so much so that if you displayed the regular iPad next to the iPad Air on a storefront, I’d probably inch closer to the former for one obvious reason: Color.

Now you may be asking, “Did this tech reviewer just say that color is the reason people will buy the new iPad?” Yes, and I say that with confidence. What do the iPhone 5c, iPhone XR, 24-inch iMac, and new iPad have in common? They don’t settle with the usual spectrum of Space Gray, Silver, and Gold finishes.

Apple clearly has a way with colors and knows full well that come holiday season, it won’t be the processor or software features that drive sales, but the rainbow of gadgets — meticulously placed across the wood grain tables of Apple stores everywhere. Heck, go to Apple.com right now and take a guess at what the company thinks will sell you on the new iPad.

This is only half of the story with 2022’s iPad, of course. There are several more changes across the board that alter the Apple tablet experience — for better or worse. The plus side includes USB-C support, leaving the iPhone as the final product line not converted to the universal charging standard, 5G support for on-the-go tasks, and a new 12MP ultra-wide camera that sits on the longer side of the iPad instead of the shorter one. More on that later.

As for changes that no one asked for: A new dongle! The 10th-gen iPad does not support the 2nd-gen Apple Pencil and, with the conversion to USB-C, no longer has a port to directly plug the original Apple Pencil into. The solution, as is the case with many Apple accessories, is an adapter (female to female, Lightning to USB-C) that bridges the pencil and a separate USB-C cable to the iPad. Considering the new iPad does not have a magnetic strip to station the Apple Pencil on — the new landscape camera has moved into that real estate now — the dongle, along with the stylus, are just two accessories you’ll have to carry around separately.

It feels like forever since Apple’s “What’s a computer” campaign, but the question still stands with this year’s iPads. While I don’t expect the standard model to replace a full-fledged laptop or desktop, Apple certainly wants you to think that way.

Along with the 10th-gen iPad comes a new Magic Keyboard Folio. It has a bendy kickstand that gives the tablet Surface Pro-like viewing angles, a soft-touch keyboard with a 14-key function row — you know, the shortcuts typically found on the MacBook Pro keyboard or any productivity pad, and a glorious $249 price tag.

Besides the price, my one complaint with the folio-style accessory is how it’s not the most lap-friendly — unless you have long legs. As is the case with all kickstand-supported covers, the 2-in-1 form factor requires too much vertical space to station in an optical manner. I’d argue that the iPad Pro’s hinge-based Magic Keyboard wins out in this regard.

Pair the Apple Pencil and Magic Keyboard Folio with iPadOS’s split-screen operations and picture-in-picture video playing, and you get a semi-Pro iPad. I say semi-Pro because while the new iPad runs on the same iPadOS 16.1 software as the latest Pro model, it doesn’t get all of the multitasking features, like Stage Manager. Perhaps this is Apple’s way of differentiating the iPad models, but if you’re going to offer $250 accessories, then users should get just as much on the software end to take advantage of the hardware.

As far as the iPad’s performance goes, I’ve been very satisfied with what you get for the money. I paced the tablet through rounds of 4K video-editing via iMovie (what I suspected most users buying this model would use), playing Wild Rift and Asphalt 9 at 60fps, and doing more usual tasks like web browsing and streaming movies. The A14 Bionic chip handled all of that gracefully, with only a hint of heating here and there.

How the regular iPad beats the Pro

That said, my “first impressions” hot take is still ablaze: The iPad beats out the iPad Pro model in two regards. The first is Apple’s own accessories. The 14-key function row on the Magic Keyboard Folio is exclusive to the standard iPad, even though Apple also just released a refreshed iPad Pro.

The second area where the regular iPad edges out the Pro is camera placement. Now, I’ve already shared the hypothetical reasoning behind why Apple was able to situate the new iPad’s front camera where it is, but generally speaking, it really does bring an improvement to how you’re presented in video calls and photos.

Naturally, every video begins with you at the center, wide angle or not. Your figure is not disoriented or appears as if the camera is positioned to your side like on the iPad Pro. Considering how likely you are to use this iPad for FaceTiming with family, virtual lectures for class, and collaborating during work meetings, this simple hardware design makes all the difference for the greater good.

Also: How to use your iPhone as a webcam with Continuity Camera

To be honest, I was initially underwhelmed by the 10th-gen iPad’s endurance. Whether it was the tablet needing to assimilate with my workflow, or the fact that I was downloading apps left and right, or maybe a bit of everything, the battery life was short-lived. I ended my first two days at around 20 to 30% by the end of each night.

Fortunately, that hasn’t been the case during the second half of my week-long testing — and I fully expect the 7 to 8 hours of use that I get per day to continue for the foreseeable future. I must say, though, standardizing USB-C across all the iPads has been a godsend. Instead of having to carry a dedicated Lightning cable for the standard model, I only need one charger to power my smartphone, laptop, wireless earbuds, and now, iPad.

Also: This car charger doubles as an emergency device

Obviously, the elephant in the room with this year’s iPad is its price. $449 is not a small ask, especially when compared to the $329 iPad (9th Gen) that Apple still sells, and the fact that you’re only getting 64GB of onboard storage. Just my initial batch of apps and services cut my tester down by 15GB.

If you’re shopping on a budget, last year’s iPad should make the most sense — Apple clearly thinks that, too. But I can’t help but compare the 10th-gen iPad to the rest of Apple’s hierarchy, all of which remain pricier and, in several aspects, are not as good as the vanilla model. In the broader context, here’s what I’d suggest buying now:

iPad: If you want a modernized, do-no-wrong Apple tablet that achieves 70% of what the Pro can do.

iPad Mini: If you want a compact and portable iPad that’s great for note-taking and reading e-books.

iPad Pro: If you want a productivity workstation that supports touch and stylus input.

The biggest question mark for me is what happens to the iPad Air, now that the standard iPad is nearly the same size and weight — and costs significantly less. What’s certain is that Apple’s lineup of iPads is more convoluted than ever before, but if the goal of the revamped design is to sway potential buyers downmarket, then it may all come to fruition come holiday shopping season.

Apple will release more new products in 2022 than ever before