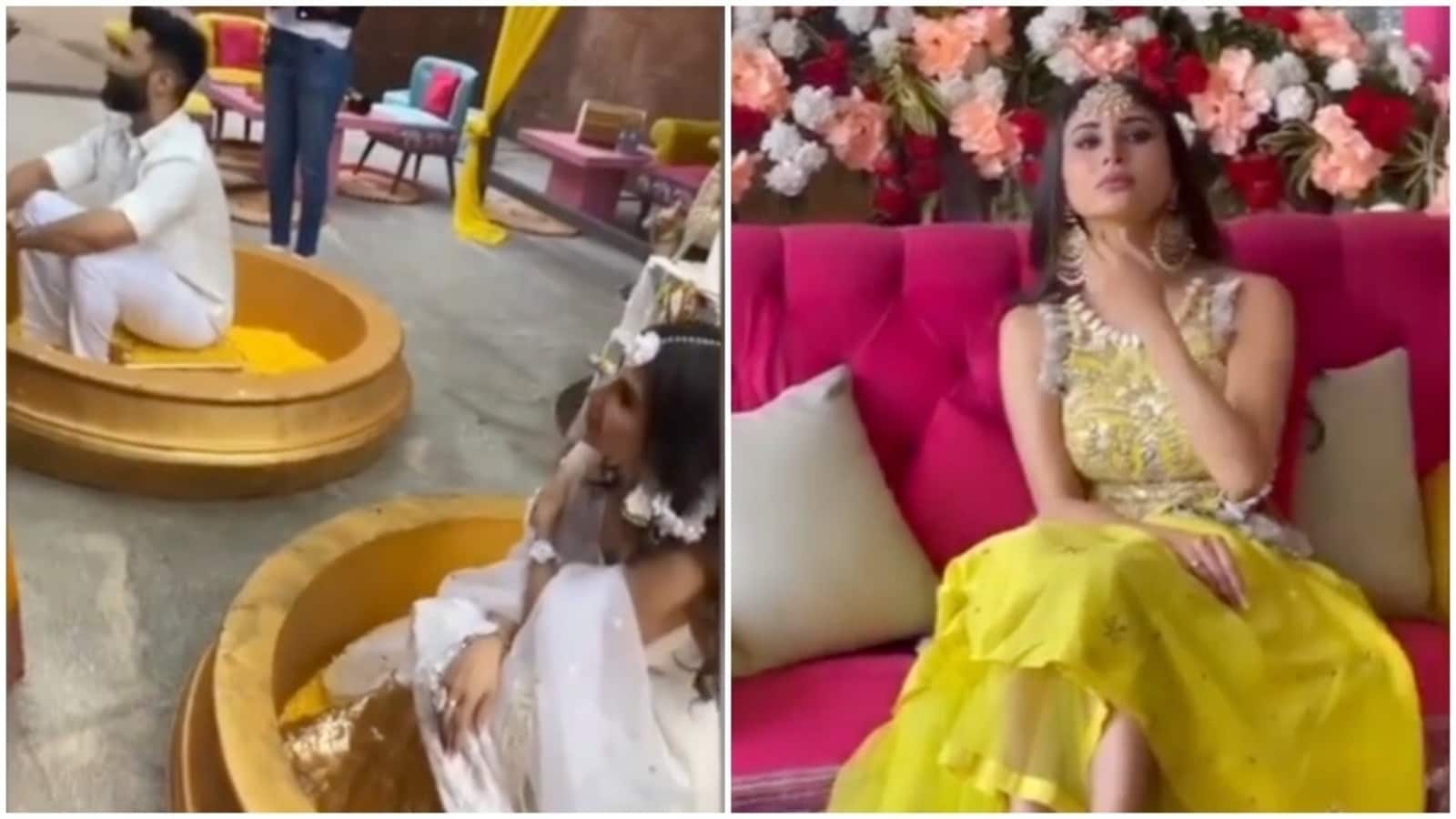 Actor Mouni Roy is all set to tie the knot with Suraj Nambiar on Thursday. Ahead of the big day, Mouni’s fan pages online and the wedding guests have been sharing sneak peeks from the haldi and mehendi ceremonies.

For her haldi ceremony, Mouni wore a white outfit with white floral jewellery. Suraj also wore a full-white outfit for the occasion. Both of them sat in large, golden tubs as their family and friends prepared for the ceremony.

For the mehendi ceremony, Mouni wore a yellow lehenga with large earrings and maang tika. She sat on a pink couch as mehendi artists decorated her hands with henna. Mouni’s Naagin co-star Arjun Bijlani joined her for the ceremony. He made a Boomerang video of Mouni and her henna-decorated arms as she pouted for the camera.

More photos show Mouni and Suraj sharing a hug after the haldi ceremony. One could see their faces covered in turmeric. Another video, posted by Arjun’s wife Neha Swami, showed him with a dhol around his neck, dancing and having a good time.

Mouni and Suraj never confirmed dating each other or that they were getting married. However, earlier this week, Mouni accepted congratulations from the paparazzi for her wedding, seemingly confirming the date.

Not a lot is known about Suraj. His Instagram bio describes him as an entrepreneur  in ed tech and real estate tech. Neither has ever posted pictures with each other on their social media.

Mouni rose to fame with her daily soap, Naagin. Arjun played her husband on the show. She will soon be seen in Ayan Mukerji’s Brahmastra, with Alia Bhatt, Ranbir Kapoor, Amitabh Bachchan and others. She reportedly plays the antagonist in the movie.

Recently, Mouni’s rumoured ex-boyfriend Mohit Raina also got married. He tied the knot with one Aditi, in a secret ceremony.

Bigg Boss 15’s Pratik Sehajpal on Neha Bhasin’s claim of him pretending to be single: Why should anyone have a problem?