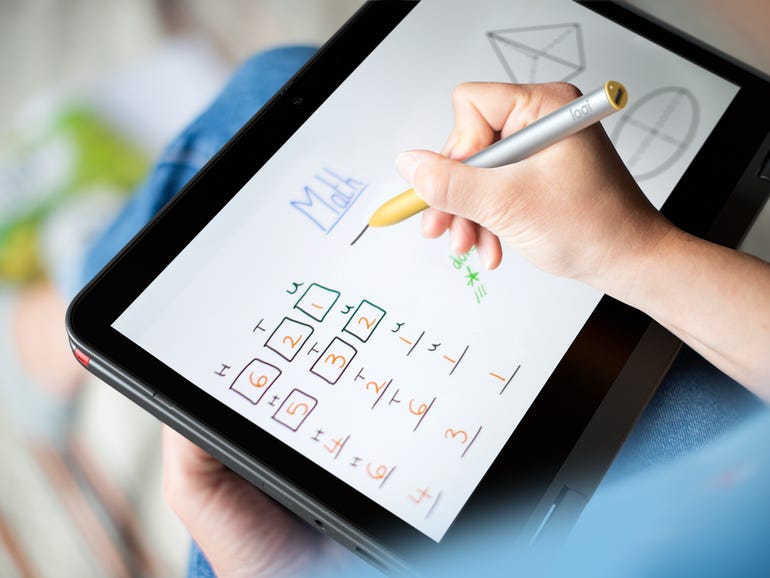 Logitech on Monday announced the Pen, a $65 stylus that works with any USI (Universal Stylus Initiative) compatible Chromebook. While Logitech is announcing the Pen now, it won’t start shipping until April. It will be available to purchase through Logitech’s Educators channels this month.

. One of the first things I noticed about the Pen is its design. Instead of a circular housing, the Pen has a triangular design — meaning it’s flat on three sides. According to the company, the design is meant to be easy for children of all ages to hold for long periods of time. That’s also the same reason that the yellow grip on the Pen comes up higher than you’d seen on a regular ink pen. During testing, Logitech observed kids holding the Pen in different places and with different grips.

On the top of the Pen is a USB-C port and indicator light. The port is used for charging the pen. The internal battery should last about 15 days with typical use during class. A 30-second charge is good enough for 30-minutes of use, according to Logitech.

There isn’t a pairing process for Pen. It’ll work with any USI-equipped Chromebook, meaning that a student and teacher can work on the same device with their own Pens at the same time.

There’s a total of 4,096 levels of pressure sensitivity, and the Pen itself is MIL-STD-810G certified. That means it’s built to withstand a drop from four feet and is also spill-resistant; that includes the charging port, which can get wet and still work after it’s dried out.

During my time testing the Pen, I enjoyed writing with it. I appreciate the lack of a true pairing process. You only need to hold the end of the Pen to the screen and start writing — it’s pretty cool. The device itself is lighter than it looks, which is a good thing. It’s comfortable to grip as well.

Each Pen comes with a 3-year warranty and ships in a bag with a barcode for each device’s serial number (to help with schools deploying the Pen and asset tracking).

How a tech company used AI to have a fake Joe Rogan interview a fake Steve Job for a podcast- Technology News, Firstpost