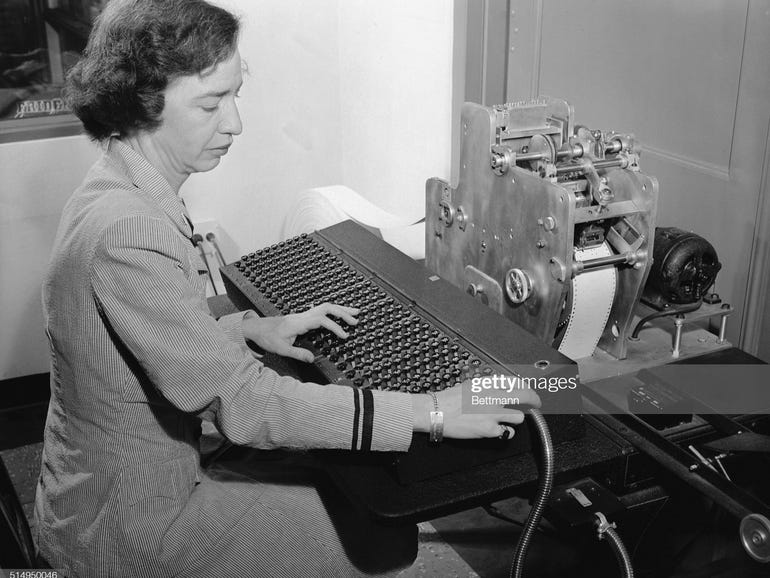 If you are an aspiring programmer, software engineer, or data scientist — or even a student just starting a computer science degree — you may find yourself wondering, “Who should I look up to?” If you belong to a group that is underrepresented in computer science, such as people of color, women, and LGBTQ+ people, this might seem like an especially hard question to answer. The good news is that we have some famous computer scientists of diverse backgrounds to share with you who might be able to offer inspiration.

Computer science has not always been dominated by white men — rather, the field is a patchwork of creative and innovative thinkers from all races, genders, and backgrounds. With time, this patchwork continues to become more diverse and inclusive.

Read on to learn about some of the most famous computer scientists in history with whom you might have a lot in common.

The list of scientists that follows has been organized according to three main factors: historical importance, relevance to underrepresented groups, and impact on computer science knowledge. While many of the scientists you will find in our list are famous in computer science circles, not all are necessarily well-known to the public.

Above all, we have striven to give representation to innovators who have laid down the gauntlet for those that followed, and to those who have used their gifts to educate others.

We have omitted the usual suspects of whom everyone has heard, including:

While these individuals have been massively influential, they remain a group largely composed of entrepreneurial white men. Our list strives to give more air time to pioneering thinkers and underrepresented groups.

Read on for our list of ten groundbreaking computer scientists from the past and present. We hope you will find inspiration in their stories and feel the call to follow in their footsteps.

Computer programmer Ray Tomlinson is credited as the “inventor” of email — in 1971, he created person-to-person network email while working at the research and development company Bolt Beranek and Newman. Tomlinson was the first to use the “@” symbol to separate local from global emails in email addresses, pioneering the “user@host” structure of email addresses used now.

Thanks to Tomlinson’s experimentation, it became possible for users at different computers to transmit messages, which eventually ushered in a revolution in human communication.

Margaret Hamilton coined the phrase “software engineer” in 1963. Hamilton’s greatest achievement was perhaps leading the team that programmed the guidance computer for the Apollo moon missions of the late 60s and early 70s. The MIT alum later went on to found a series of software development companies, including Higher Order Software.

In 2016, Barack Obama presented Hamilton with a presidential medal of honor acknowledging her pioneering and inspiring contributions to computer science.

Alan Turing, one of the most influential computer scientists of all time, invented the first computer in 1936. In 1950, he created the Turing Test, which measures a machine’s ability to successfully emulate human intelligence. This innovation influenced the development of the machine learning and artificial intelligence fields in the following decades.

Turing was gay and has become a symbol of the LGBTQ+ community’s important presence in STEM. Today, the Turing Award is the highest distinction in computer science, awarded by the Association for Computing Machinery (ACM).

Hopper also helped program the Harvard Mark I computer that played a key role in the final years of WWII. In 2016, she was awarded the presidential medal of honor for her contributions to computer science.

Barbara Liskov is a computer programmer who pioneered modern techniques in writing code. The Liskov Substitution Principle used in practical computer coding is named after her. Liskov used concepts from artificial intelligence to simplify and automate the coding process. Her system design and programming ideas introduced methods for fault tolerance and data abstraction now used every day to help software run seamlessly.

In 2008, Liskov received the Turing Award in recognition for her contributions to computer science.

Jerry Lawson was a Black game designer and forgotten pioneer of the video game industry. In 1976, Lawson helped design the Fairchild Channel F, the first cartridge-based video game system. Later, he went on to found his own video game company, Videosoft, and work at Stanford.

Lawson’s contributions to computer science were sadly overlooked for decades, though he was recently spotlighted in the Netflix documentary High Score. He passed away in 2011.

Clarence Ellis was an influential computer science researcher active at Xerox PARC in the 70s and 80s. He was the first African American to receive a doctorate in computer science.

OfficeTalk, a collaborative word processing and editing program that predated Google Docs, was developed by Ellis in the 80s. Ellis pioneered Operational Transformation, a set of techniques for technology-based organizational collaboration. Sadly, he passed away in 2014.

Guido van Rassum is the original creator of the Python programming language, which he named after the Monty Python comedy troupe. Van Rassum created the seminal programming language in 1989 as a hobby to keep him occupied during his workweek. Today, Python is used in data science, full-stack development, and software engineering all over the world.

In 2012, van Rassum retired from his role as the “Benevolent Dictator for Life” representative of the Python community.

So there you have it — ten famous computer scientists who changed the world. Our hope is that these innovators will inspire you to think creatively and share your gifts with the world.

With this in mind, check out our article on famous scientists with disabilities if you wish to learn more about the underappreciated heroes in science.

Bigg Boss 16: Salman Khan lashes out at contestants for nominating Abdu Rozik, tells him to leave the show