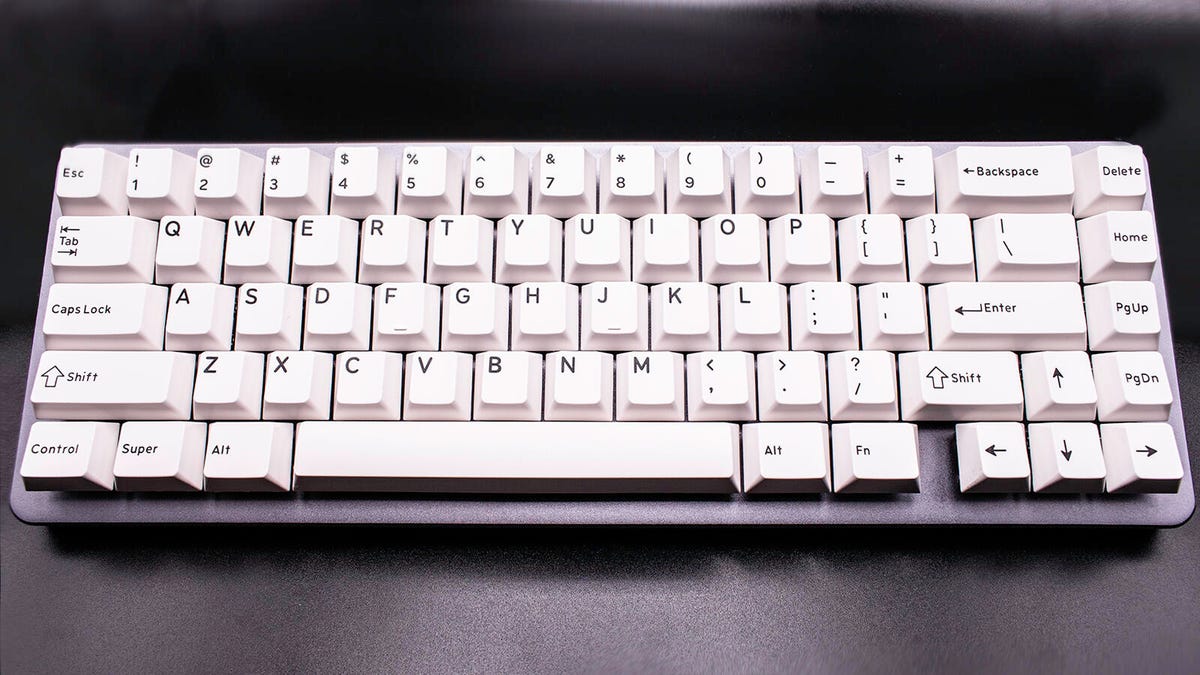 I’ve found most typists don’t think about their keycaps all that much. However, that tends to change the second they try out their first truly great – or, for that matter, truly terrible – set. The little plastic bits where our fingers land can make or break the typing experience of $10 bargain-bin keyboards and $500, custom-built, artisanal mechanical keyboards alike.

The Drop DCX keycaps are a worthwhile, though not perfect, option for users seeking a clean, monochromatic aesthetic.

Today most boards ship with OEM-profile keycaps. However, enthusiasm for mechanical keyboards has helped expand the availability of after-market sets in the SA profile, a taller profile with spherical indentations, and DSA a flatter variant that shares SA’s spherical indent.

Now, Drop is hoping to make a case for a completely new keycap shape with its DCX profile caps. This new profile attempts to take the OEM shape and optimize it for the needs of modern mech keyboard users, while also providing a clean, high-quality aesthetic. Let’s take a look at whether or not Drop’s latest attempt to disrupt the mech key market justifies leaving behind more traditional profiles and its $99 asking price.

This test was done using a Drop ALT on a leather desk mat. The ALT has Zeal PC Tealios that I’ve personally lubed and filmed, and the board itself has been band-aid modded to soften the sound of the stabilizers, and the original stabilizers were replaced with after-market Cherry OEMs.

Drop’s DCX keycaps are what’s known as “doubleshot.” This means that each key consists of two layers: an outer layer in the key’s main color, and an inner layer in the color of the key’s legend (the letters, numbers, or characters it represents), which is inserted into an identically shaped hole in the outer shell. This is a common construction method for higher end keycap sets because it makes it impossible for the legends to wear off. More on keycap types can be found in the guide linked below.

However, the process of creating the ultra-tight tolerances needed to slot those full-thickness legends into their outer shell is an expensive one. This is why most cheaper boards and cap sets continue to rely on printed legends that can wear off.

The DCX set’s double-shot legends are just about perfect. Each looks clear, crisp, and well-placed. Drop claims each inner layer fits into its outer shell with a tolerance of 0.05mm. While I can’t verify their measurement, I can say any gap is undetectable to my eyes or fingertips.

This dual-layer build creates a thicker, more solid-feeling key than you may be used to. This helps deaden unpleasant pings from key springs and provides a more satisfying sound and tactile feel. They may not be as thick as sets from GMK that cost several hundred dollars, but they’re noticeably denser than just about any single-layer set I’ve tried.

More: The 5 best mechanical keyboards: From mini to macros

Unfortunately, there’s one exception to this: the included spacebars. Where every other key uses two layers (a white outer layer and a black inner layer and legend, in this colorway), the space bar instead uses just a single layer that’s barely thicker than the other keys’ outer layer. Because of this, the space bar allows unintended light to shine through well enough that you can make out the stems below the cap, as you can see in the image below.

While this isn’t a shine-through set, and wasn’t specifically designed to be used with backlit keyboards, this is still problematic. Many boards obviously use backlights, from rainbow-flavored gaming boards to serious business models.

Drop’s well aware of this. That’s Drop’s own well-lit ALT being used in the images here. So, I’m not sure how it let this one flaw slip through in what was otherwise a very well-made set. For what it’s worth, the White-on-Black variant of this same set is unlikely to suffer from this same problem due to the darker ABS plastic used.

Speaking of ABS plastic, it provides a smooth, almost silky feel to these keycaps. That’s going to be something of a love-it-or-hate-it aspect of them. If you prefer the rougher, grippier feel of keycaps made of PBT plastic, you might think these are too slick. However, if you prefer a smoother texture, I can say these are one of the best-feeling ABS sets I’ve used.

Importantly, even after a week of average use, the set showed no signs of picking up the kind of gross shine some cheaper ABS caps can develop way too fast. It proves that ABS can be just as long-lived as PBT, if done right.

To put it plainly, it feels very similar to the OEM keycaps you’re likely used to. This can be good or bad, depending on your perspective.

On the negative side, it’s not revolutionary, nor does it provide any benefit to your typing speed. I found myself typing pretty much identically, as far as speed and accuracy go, on these keycaps as I did on my usual OEM set.

On the positive side, there’s no adjustment period. Unlike switching to SA’s super tall keys, or DSA’s totally flat caps, DCX provides a comfortably familiar typing experience that you immediately feel at home with.

So, what’s different about these keycaps then? First and foremost, they’re shorter than OEM keys. This provides a feel that’s closer to what you’d expect from a low-profile board, or something halfway between the typing experience of a discrete keyboard and a laptop. It also creates a sense of the keys being slightly faster, even if that sensation doesn’t necessarily translate into actual words-per-minute.

The only other differences detectable to this writer’s hands were extremely minor: a barely different angle here, a slight variation in how sharp the edges of the cylindrical indent was there. Drop’s own promo materials call the DCX profile “both familiar and undeniably unique.” I’d say that’s an absolutely fair and accurate description.

This refers to both pricing and quality. I’ve never felt a $50 set that matched the thick, satisfying sound profile these doubleshot caps do, but I’ve also never seen a GMK set with a spacebar thin enough to let unintended light let shine through.

In this way, the DCX keycaps from Drop are much like the company’s mechanical keyboards: a great, mid-range entry point to the mechanical keyboard hobby. Upgrading from your bog-standard keycaps to this set will give you a clear idea of if the impact keycaps can have on your typing experience is worth optimizing for you.

For me, the Drop DCX keycaps are a worthwhile, though not perfect, option for users seeking a clean, monochromatic aesthetic. That said, I can’t recommend enough that Drop take a look at that issue with the space bar.

Aside from this one flaw, the DCX sets wholly justify their asking price, especially with the full and complete range of caps provided. Things like shortened modifier keys, color-swapped accent keys, and alternate legends all increase the value proposition to a point where the DCX base set is all most people need. The only exception would be Mac users, who will want to opt for the $25 set that includes Mac-specific mod keys.

If you’re looking to dip your toes into the deep end of the mechanical keyboard pool without straying into high triple digit costs for just your keycaps, the Drop DCX profile offers a great entry point.

If you like this aesthetic, but prefer something closer to an SA profile, these are a great option. They’re a little more expensive, but still quite cheap as GMK sets go.

An even cheaper set than the DCS caps opts for PBT plastic and a more standard OEM profile instead. While I haven’t tested this specific set, I’ve found Glorious’ GBPT sets to be shockingly well-made for their cost, in general. It’s also available in a whole rainbow of colors.

And now for something completely different…as least as far as its colorway goes. This other DCX set is a lot flashier with its space-inspired colors, but it still provides the exact same quality and new profile.

Anupamaa written update June 15: Anupamaa and Barkha’s guests get into altercation over Hasmukh