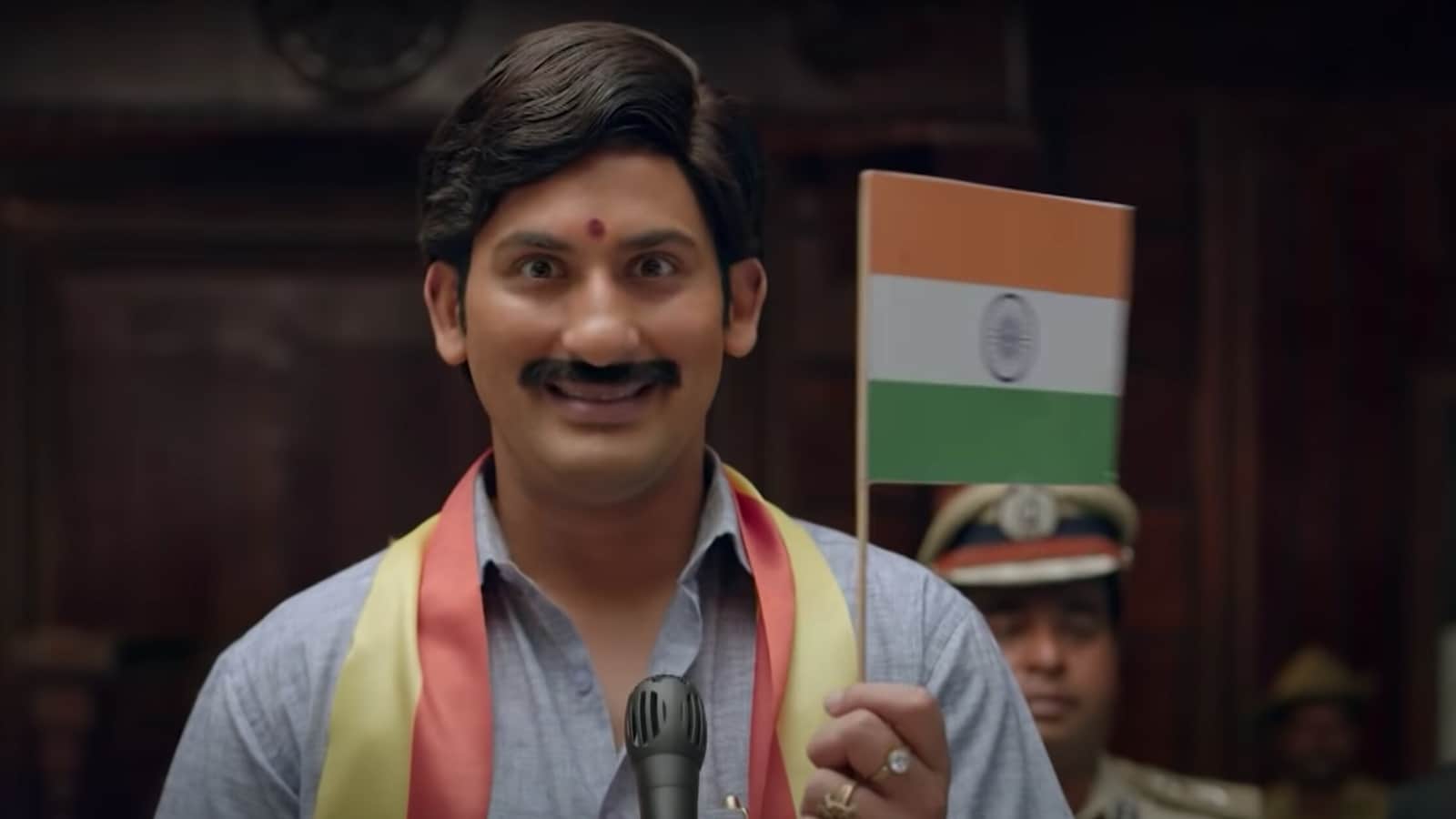 Voot Select’s wacky new comedy series Humble Politiciann Nograj has had a two-year-long journey. “I showed my wife this show when we were dating and she thought it was funny. We’re married now. A lot of time has passed,” says series creator and lead actor Danish Sait.

The show is based on the character Danish first created for radio, which then got turned into the popular 2018 Kannada comedy movie of the same name, and is now a 10 episode web series. Like the 2018 movie, the show, too, flits between languages but is mostly in Kannada, making it one of the first Kannada web series on a major platform.

The series, an unapologetically silly and self-aware satire, follows the adorably obnoxious antics of the morally bankrupt corrupt cartoon Nograj and all the hilarious drama surrounding his attempts to become chief minister of Karnataka. Nograj belongs to the OBP (One Big Party), and attempts to form a coalition with the FRP (Family Run Party) to go up against the MSP (Most Secular Party) led by KGB (Krishna Gundu Bala played by an excellent Prakash Belawadi).

The new show sees the return of the same winning writer-director duo behind the 2018 movie, with Danish once again serving as writer along with his co-writer Saad Khan, who also returns as director.

Over Zoom, Danish spoke to us about the response to the show so far, the uphill battle getting it made, the tricky territory of politics and his favourite gags.

What have the last few days been? What’s the response to the show been like so far?

It’s been very good, we’ve had a lot of people tuning into the show and I think that in itself is a huge deal. When you’re the underdog whose back is against the wall and you’ve only been given one season to prove that this kind of show in this language for this market can work, you only have one shot. And I think the number of people tuning in and watching the show has been overwhelming and the kind of love and support we’ve received is incredible. And of course, between all of that, you have the reviews, so it’s all kind of fallen in place.

I’ve even had friends and colleagues from the Karnataka film industry call in and just say that they’re happy that the show is out there because it opens up a new market and that’s always been the endeavour. So, I’m just overwhelmed, happy and extremely grateful.

You’ve talked about how the show has been two years in the making, and the long journey of finding the right partners and a platform willing to back it. I’m assuming a big reason for that was also because you wanted to keep the show in Kannada? That must have been an uphill battle.

It was an uphill task. It definitely wasn’t an easy journey. But I should give credit to Mr Sameer Nair and his team at Applause Entertainment for not questioning us on the language or backdrop of the show. After that there were a bunch of conversations with other stakeholders about whether the market is ready or not, but if I just look at where we started two years ago, I don’t think Humble Politicann Nograj could have found a better home. And I will be continually grateful to the folks at Voot Select for believing in the show. Humble Polticiann Nograj the 2018 film was the first Kannada film on Amazon Prime Video and that sort of started this whole journey of more Kannada films on their service. So, I’ve fought this kind of thing for four years and for us to get to this stage where the show has found an exclusive release on Voot, I can’t tell you how happy I am because it opens up opportunities for everybody from the Kannada industry.

The show is full of so many laugh-out-loud gags. There’s that entire ladder sequence where you tell Manjunath “I thought you were a harmless introvert”. There’s also the towel scene with Manjunath, the Patels in the bathtub and so many more. What were your favourites?

I can’t really pick a favourite moment because for us it was all so funny. But it’s interesting you mentioned those because, for example, the Patels in the bathtub was me improvising on the spot. That wasn’t even written and I said Patels instead of petals. And I could hear the crew crack up in the background.

The “harmless introvert” line from the ladder scene we actually heard someone say on set, so we picked it up from there. A lot of these were just in the moment. Like for example, in the same ladder scene with Manjunath calling me a “liar c*ck b**ch”, that was also just something he (Vijay Chendur) improvised on the spot. Vijay has now completely got the hang of it so if I throw something at him in a scene, he just knows it’s coming.

Saad and I have been doing improv for so long now that it just comes to us naturally at this point. That’s not to say most of it isn’t on paper, a lot of it is. For example, KGB was completely on paper. Prakash Belawadi sir was just brilliant in that role, and he improvised at times too because he’s an incredible actor.

So, a lot of comedy just happened in the moment, and fortunately for us, we worked with talent that also loved working in the moment.

Do you have a list of your favourite gags that didn’t make the final cut?

There are 48 cuts (laughs) and they all lie in a highly encrypted hard drive. Those cannot come out because if they do, I don’t know what will happen (laughs). But of course, that was always going to happen. Platforms and production houses have their own standards and practices and lawyers and we’ve been through that. But in hindsight, it’s fine. That’s the thing with comedy, you need to know when to hold back and what to include. I’ll give you an example. I wasn’t particularly kicked about the scene where Nograj goes to visit his mother, I wanted it chopped off. But the entire team wanted to keep it so I went with their call.

What’s the most oddly specific discussion you guys had on set for the sake of a specific gag? I can just imagine all of you huddled in a serious discussion saying things like “should Manjunath’s towel be shorter?”.

There are so many moments like that, I can’t even list them all. And for the record, Manjunath’s towel being shorter was again genuinely in the moment. It just so happened his towel was shorter so I called him out. Or even me saying “have you ever heard of waxing?”. That was also improvised on the spot (laughs). That’s just me being in character. If you slap a wig and moustache onto me I’m quite a looney man and I’ll end up saying a lot of absurd things.

How do you know if a bit or joke is actually funny? Are you just following your gut about what’s working in a scene?

It’s very instinctive. Comedy is very instinctive. You just know if it’s working or not. If you’re laughing while writing it and reading it and when you’re creating that moment and when the edit is out, you know you’ve laughed through it enough to know it’s working. That is until you lose objectivity of course. That’s why comedy is an incredibly hard genre to make. It’s either funny or it’s not. If it makes me and the team laugh, I know it’s working. It’s as simple as that.

For example, some critics have said they wished the show was slightly shorter, but you lose objectivity. That’s the thing with comedy – you just want to keep going and pushing and you never know how much is enough. Especially when you’ve worked on something for so long.

And it’s with comedy because what do you attack? If you focus on the laughter the story can go out of the window and if you focus on the story, the laughs can be forgotten so it’s a very complex space to operate in. And I think Saad has done a great job in maintaining that balance.

There were also reviews that said they wished it was more serious or wished there were consequences for Nograj, but he can’t lose. He never loses. Even when the tide is against him he knows how to come out on top. And I will tell you as many jokes as I can in the process of him getting there. Even if we get a second season I’m telling you right now he’s winning and he always will win.

It’s obviously a brave show considering you’re taking on and satirising the big Indian political circus. Were you ever worried at all about the kind of reactions the show might get?

Not really because all Saad and I really wanted to do was something funny. And we also had the experience of Mr Sameer Nair and team Applause Entertainment. Not to mention Mr Prakash Belawadi who himself has been an active voice in politics. If you look at his career, he used to be a journalist who covered politics for the longest time before he became an actor. And if you look at the show, it’s not left, it’s not right, it’s just pure buffoonery.

So, in terms of the world that we were going for, most of it is so stupid that we weren’t worried. And we knew we weren’t attacking a specific person or party. The space that we came from was honestly just to make a funny show. It only really gets muddled or complicated if you’re trying to push a message through the show and we aren’t. All we wanted was for people to laugh for 10 episodes.

I feared Amazon was always stalking me. The whole truth really hurt