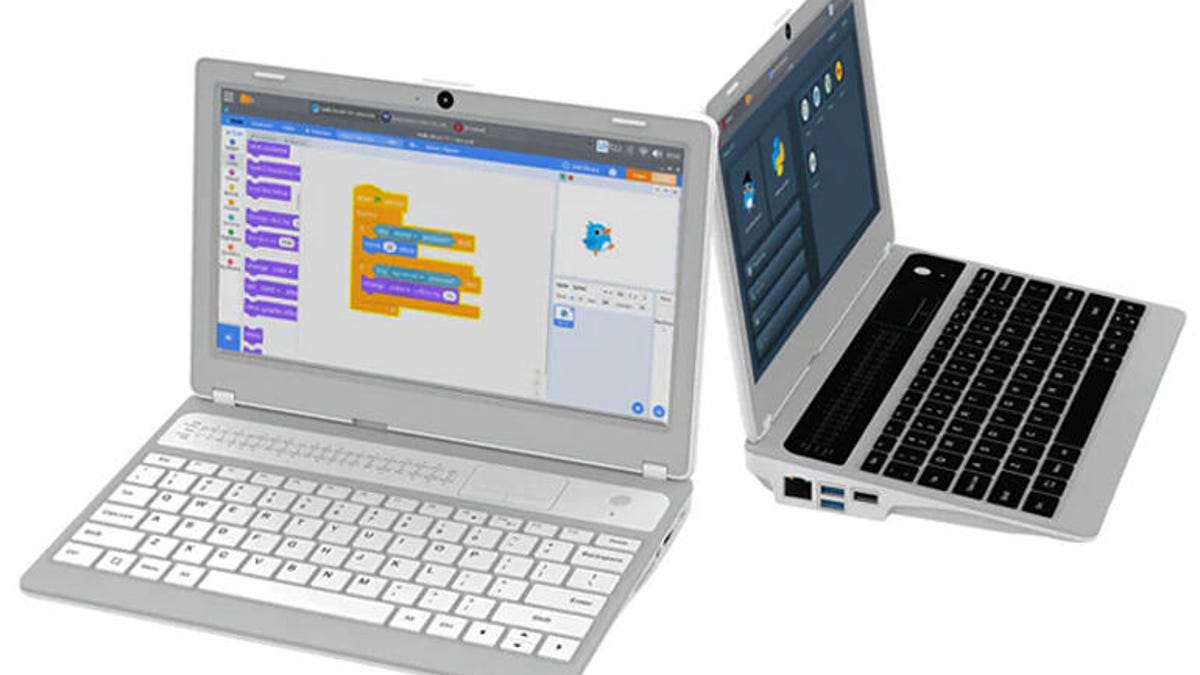 The Raspberry Pi was born as a way of rekindling the computing boom of the 1980s, where low-cost hardware gave birth to a generation of programmers. It’s an ambitious vision, and one that’s made Raspberry Pi’s family of single-board computers a familiar tool for educators all round the world.

But a single-board computer needs a screen, keyboard and mouse to be usable, and those need space. What many users want is something that builds on the Pi while offering features we expect to find in a laptop. That’s what Chinese electronics company Elecrow is delivering with the latest member of its CrowPi family of devices, the Raspberry Pi 4-based CrowPi L.

A Pi in netbook clothing

Looking very much like the 2007 Asus Eee PC netbook, the CrowPi L is a small 11.6-inch laptop, with a clear and bright IPS panel. It’s probably best to compare the CrowPi L with Raspberry Pi’s own Pi 400. Both devices install the familiar Pi in a more traditional computing form factor — the Pi 400 using custom hardware in a variant of Raspberry Pi’s own keyboard, while the CrowPi L uses a standard Pi 4B in a custom laptop style case.

You can buy the CrowPi L without a Raspberry Pi, but I was sent one prepopulated with an 8GB Raspberry Pi 4B. If you’re using your own device all the components used to connect the case to a Pi are included: a dual MicroSD card adapter; a GPIO port extender with built-in fan; and an adapter that takes one of the Pi’s mini-HDMI ports to drive the screen, with the other used for an external full-size HDMI port. The adapter links the Pi to the CrowPi L’s power port and battery.

It’s worth noting that while the power port and bundled power supply look like USB-C, it’s not a standard variable PD PSU. Instead, it’s a fixed 12V 2A unit, which means it can only be used with the CrowPi L. Sadly you can’t use an alternative PD power supply — I tried using the USB adapters from Dell and Apple laptops and neither worked. You can get versions with US, UK, EU, or AU plugs.

Don’t expect much from the 5000mAh battery as this is a netbook-class device that only manages up to three hours of use per charge. This makes sense considering that the target market for the CrowPi L is schools and other educational establishments, where it will spend most of its time as part of a computer lab.

Most of the Raspberry Pi ports are accessible. On the left there are two USB 3 ports, one USB 2, and an RJ-45 Ethernet port. One of the Pi’s two USB 2 ports is used to support an internal MicroSD card for storage that’s under the removable magnetic cover that hides the CrowPi L’s Raspberry Pi. Extra storage is a useful idea; students can be issued with a small, cheap card for their code, which is all they need to bring with them to the lab — just like a floppy disk, only with a lot more storage and a lot smaller.

My one quibble here is that there’s no access to this slot without opening up the device. It would have been better to have a separate slot of its own in the case. The right side has an HDMI port for an external second screen, along with a miniature set of GPIO pins, and a 3.5mm headphone socket.

The CrowPi L is a utilitarian device, with an 11.6-inch 1366 by 768 display and a US keyboard. A small trackpad is situated above and to the right of the keyboard, next to the power button. It’s an odd place to find the trackpad and is somewhat uncomfortable to use. Luckily Elcrow bundles a wireless mouse, with a USB dongle that needs no configuration. There are two keyboard options: one with white keys, the other with black.

Having a screen and battery makes the CrowPi L an attractive device for schools and hobbyists, especially if you get the Advanced Kit option. This adds a GPIO breakout board with 20 quick plug connectors and a box of sensors and actuators. This uses Elecrow’s Crowtail connectors and the kit includes LEDs, displays, motors, buttons, touch sensors, moisture sensor, and power controllers. It’s more than enough to start exploring the world of the internet of things.

Start by assembling the breakout board, which includes acrylic covers for top and bottom as well as a small ribbon cable that connects to a matching GPIO port on the side of the CrowPi L. There’s a pinout reference printed above the keyboard to help you build your own hardware. Once plugged in and powered up, a bright green shows it’s ready for use.

Turn on the CrowPi L and it boots into its own fork of Raspberry Pi OS. This adds a more Mac-like theme with a quick-launch dock for installed applications. On start-up it launches its own Pi Panel app, which contains a launcher for common apps, links to useful websites and forums, as well as to programming tools like Arduino, the Thonny Python editor, and CrowPi’s own Scratch-based Letscode visual programming tool. The Pi Panel launcher includes two large buttons that launch Letscode and Python tutorials.

These mix descriptions with guided access to development environments, walking you through writing games or working with the Crowtail sensors and actuators. They’re a useful guide to learning basic coding and could work well as part of a computing curriculum. Lessons are presented as a series of steps, and the team promises additional tutorials in future which will be available from its website. There’s even an on-screen guide to making your own courses for Pi Panel, allowing you to import other materials or write your own, ensuring that the CrowPi L can be used outside its bundled courseware.

One thing to note: the default CrowPi fork of Raspberry Pi OS is based on the older Buster release rather than the current Bullseye and updates from repositories in China. This is where the CrowPi L’s dual MicroSD card adapter comes in handy, as it lets you keep access to its library of tutorials while still being able to access the latest Raspberry Pi software. I used the Raspberry Pi Imager to make a new MicroSD card with the current release, before opening the CrowPi L’s magnetic flap over its Raspberry Pi. You will need to carefully remove the GPIO adapter before sliding the Pi out to access the dual SD card adapter.

The Pi is held in place by magnets so is easy enough to remove. You can then slot in the second MicroSD card before replacing the Pi and reseating the GPIO adapter. A switch on the MicroSD card adapter lets you switch between drives when the laptop is off. After switching to slot 2, replacing the magnetic cover, and powering up, you’ll be running on Raspberry Pi OS. Unfortunately, the CrowPi L’s 1366 by 768 display resolution isn’t natively supported by Raspberry Pi OS, so you’ll need to edit config.txt to add support. Alternatively, you can use the screen configuration tool to set it to 1280 by 720, which works reasonably well.

There’s a lot to like about the CrowPi L. Yes, it’s not thin and elegant like the latest laptops, but it is functional and cheap and that’s what matters when it comes to K-12 budgets, or for hackable hardware that’s ready to be built around. The Raspberry Pi inside the case remains the familiar Pi, but CrowPi has done sterling work in turning it into the laptop-equivalent of the Pi 400. If you want to learn programming and working with IoT, it’s an ideal place to start — and if you already have a Pi 4B, it’s only slightly more than $250.

If you don’t need a laptop but still want a Pi-based PC, Raspberry Pi’s own Pi 400 is well worth a look.

Raspberry Pi 400 review: The keyboard is the computer

Raspberry Pi just made a big change to boost security

How I used a Raspberry Pi to automate birdwatching

Reena Aggarwal: I feel proud that I stood the test of time