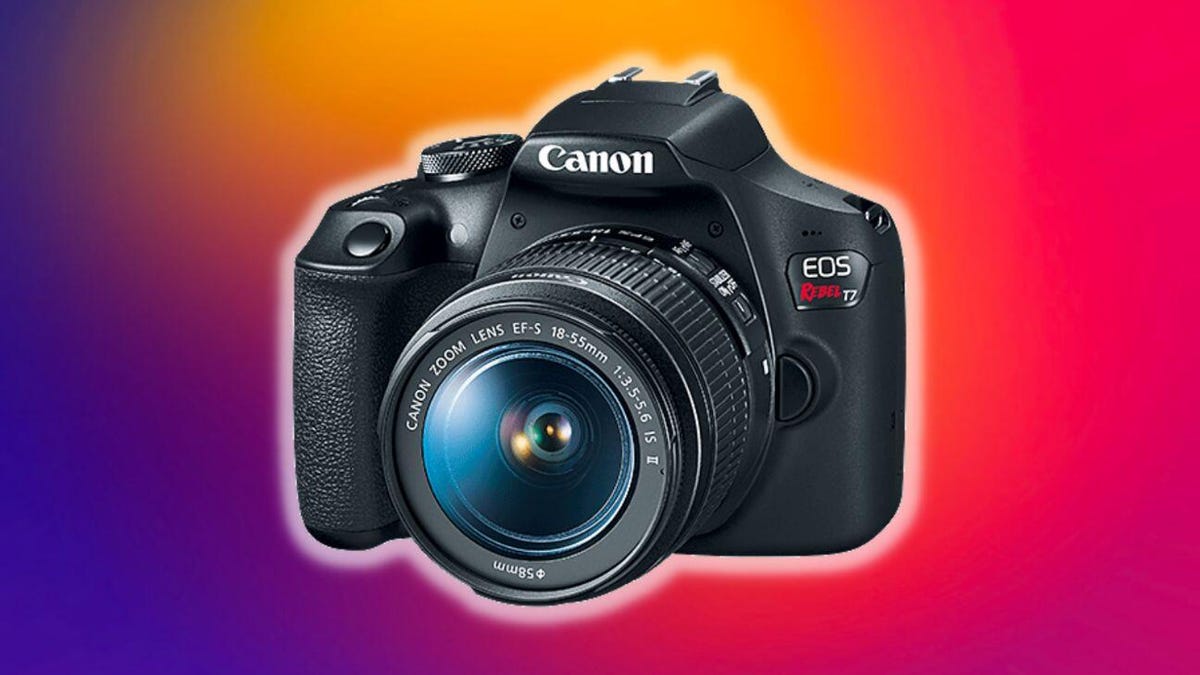 As an avid content creator, I wanted to upgrade my camera, so I purchased the Canon EOS Rebel T7. On most weekends, you can find me at a racetrack taking pictures of late-model stock cars, so I need a camera that can catch the fast-moving cars with excellent clarity, and this Canon didn’t disappoint.

Is it the most flashy and extravagant camera? No. Is it the best camera on the market for less than $1,000? Arguably, yes.

Though the camera model came out in 2018, it remains a great option both for those new to photography and for veterans of the craft. The Canon EOS Rebel T7 gains an improved 24.1-megapixel sensor over its predecessor, the T6, but otherwise the two cameras are identical.

While this DSLR camera is one of the cheaper options when it comes to photography, I put it to the test to see how it stacks up against some of the higher-end mirrorless cameras.

Before buying a camera, it’s always important to check the specs. With a 24.1MP sensor, this camera is very competitive with its Nikon and Sony counterparts.

The Nikon D3400 and the Sony Alpha 7 II, the Canon T7’s closest equivalents from each brand, have a 24.2MP and 24.3MP resolution respectively, but both shoot video at 5 frames per second, while the Canon T7 shoots at up to 3fps. Though the Canon T7 lags in frames per second and megapixels compared with its counterparts, it makes up for it in price.

This camera features a Digic 4 Plus image processor, which enhances the quality of images by quickly processing high-ISO pictures — 60% faster than its predecessor. Additionally, with the T7’s built-in Wi-Fi capabilities, you can connect it to your mobile device, printer, Canon Image gateway, or even another camera.

Lastly, this camera is compatible with all Canon EF and EF-S lenses, allowing you to find the perfect lens for portraits, nature photography, or whatever else your creative heart desires.

As a Canon user for a couple of years, I found the company’s design is consistent and easy to navigate, which stands true with this camera. When put side-by-side with the Nikon D3400 and Sony Alpha 7 II, you can see that all the buttons on the Canon EOS Rebel T7 are neatly positioned on the right side of the camera. Having the buttons near the thumb rest makes accessing different settings on your camera much simpler.

As for the rest of the camera, the three compared here are similar across the board. The Canon T7 has a rotating knob at the top, which you can use to choose between 14 different modes ranging from automatic to food photography. On the top of the camera you’ll also find the on/off switch, the manual flash button, a wheel that allows you to change various settings, and most importantly, the shutter-release button.

What’s in the box?

In addition to the camera body, the EOS Rebel T7 base package gets you an EF-S 18-55mm lens, a battery and charger, and a high-quality strap included in the box. As I mentioned earlier, there are various kits you can purchase as well.

You will also find a user’s manual that includes step-by-step instructions on how to set up your camera.

Let’s put it to the test

To get the most out of this camera, I went to a place I’m incredibly comfortable, a racetrack. I got the chance to be credentialed media at North Wilkesboro Speedway in North Carolina — a track with loads of history and a picturesque aesthetic. As well as the racetrack, I visited Romare Bearden Park in Charlotte, North Carolina, to capture shots of the skyline and the garden during the morning hours

Note that I used the EF 75-300mm lens, not the base EF-S 18-55mm lens, for all the photos from the park and most photos from the speedway. I’ve included which lens I used in the caption of each photo.

Charlotte is a beautiful city, and it has a great park located in the heart of Uptown. I’ve never dabbled in nature photography before, but after a short time with this camera, I think I might start doing it more.

The shots I was able to capture from the park required no editing and came straight from the camera. By using various settings and the nine-point autofocus, taking these pictures was a walk in the park, literally.

Capturing the perfect picture is all about location and how well you can direct your camera’s focus. For the picture above, I wanted to see how well it captured the subject of the photo if there was an obstruction in the view. As you can tell, it did a great job of focusing on the waterfall fountain while blurring out the leaves in the foreground.

Overall, I was impressed with how these pictures came out and excited to capture more images of the outdoors in the near future.

This racetrack is one of the most historic racetracks in stock car racing, and when the gates recently reopened, I knew I had to shoot some photos. I tested this camera’s ability to shoot fast-moving objects as the cars ran into the corners at over 100 mph. While I wasn’t impressed with the camera only shooting 3 frames-per-second in continuous shooting, I was still able to capture a lot of great photos from the track.

After adjusting my camera settings to the ever-changing lighting, I was able to capture some incredible shots of the cars.

Most of the pictures required minimal editing. With outdoor photography, every cloud affects what settings you need on the camera. After dealing with a rain shower, cloudiness, and sunshine, I was able to adjust the settings to get shots like these easily.

While testing out how the camera worked with action shots, I also wanted to see how the camera performed when using it the capture the environment at the track. Here are two of my favorites from among those pictures.

There are better and newer cameras on the market than this one, but if you’re proficient in Lightroom or other editing software, you can make about any photo look good. Also, most of these photos required minimal editing, and I was able to take them straight from the camera to my flash drive. With camera prices ranging from a couple of hundred bucks to a couple of thousand bucks, having a camera that captures images and video effectively for cheap is ideal; this DSLR camera offers just that.

Though this camera doesn’t have 4k video capabilities, you can shoot in full HD at 1920×1080 with 30fps. If you will mainly be shooting video with this camera, it might be a better option to go with the Canon Rebel T8i.

Is it the most flashy and extravagant camera? No. Is it the best camera on the market for less than $1,000? Arguably, yes. And that’s why I highly recommend this camera to people looking to step into the realm of photography.