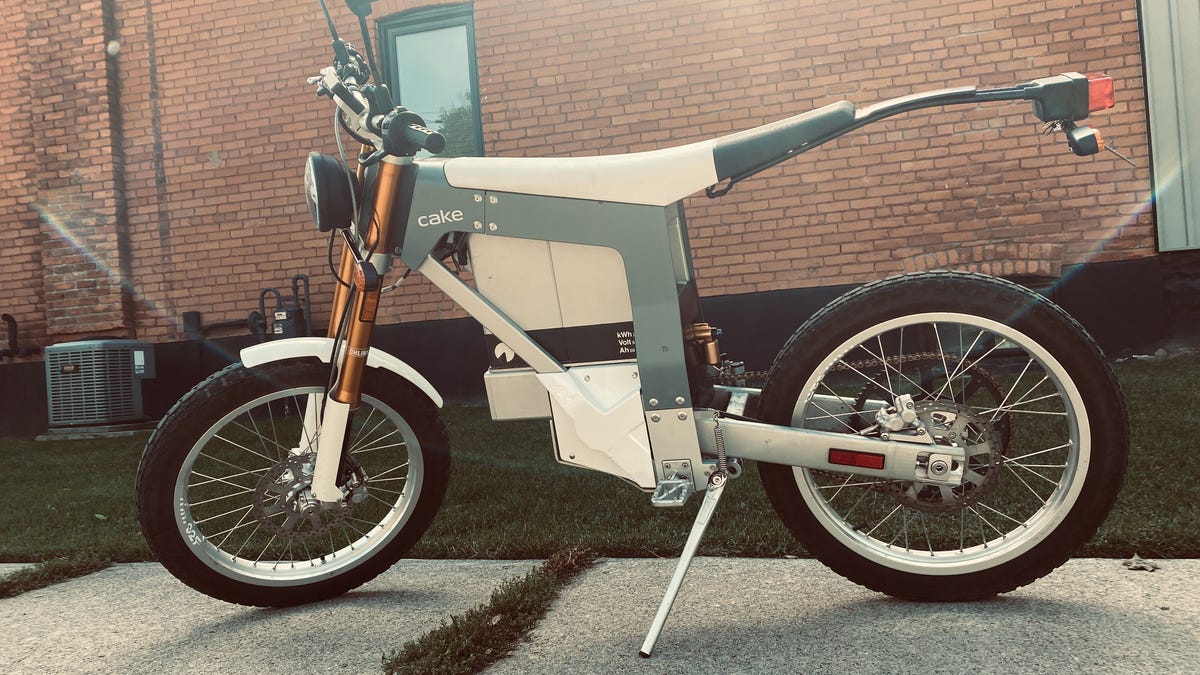 I remember when I just couldn’t believe that digital images would ever come close to matching the texture of film. I’m having a similar problem trying to imagine a future that doesn’t involve the thrilling growl of a motorcycle’s petrol engine.

That’s because if you happen to be (like I am) from places like India where two-wheelers rule the roads, your allegiances are probably not going to lie with your car, but something with two wheels.

When my kids were toddlers, I bought a newly designed Enfield Classic 500 — a gorgeous, post-war styled, modern classic — to ferry myself to work, and occasionally my kids to school.

They would doze happily on the petrol tank en route, as the single cylinder throbbed reassuringly below them.

When I returned from work, they would prance around with excitement just by identifying the Enfield’s signature thump from a few hundred feet away. (It was a popular bike, so I imagine this dance may have been going on all day.)

So when I heard that Swedish motorcycle company Cake was in my neck of the woods, I scrambled to try and get onto some of their bikes. I was curious as to how we would continue making memories on these amazing machines.

As I approached the street-side tent in front of Sturgess Cycle in Hamilton, Ontario that was displaying some of Cake’s bikes, I could see two distinctive lines — one with dirt bike aesthetics and another with moped-looking lines.

I decided to take the dirt-bike-looking Kalk& (pronounced like the first half of ‘Calcutta,’ then the word ‘and’) — a brave name to be using in order to lure North American riders. It is a dual-sport, road-legal version of its predecessor, the Cake Kalk Or, which was conceived strictly for trail riding.

The Kalk& looks gorgeous, with 19″ wheels cushioned by dual-sport tires, a narrow two-tone seat, and lots of exposed brushed aluminum (6061, CNC machined), as well as polycarbonate and ABS plastic bodywork in a minimalist frame. Like all motorcycles, it has a right brake lever on the handlebar for the front brake and a rear foot pedal for the back brake, both with discs but no ABS. There is, of course, no clutch or gear shifter.

The part of the machine that is destined to make motorcycle aficionados weak in the knees are the top-of-the-line Ohlin suspensions — the 38 mm air fork and the TTX22 rear mono-shock. On the handlebar is a TFT digital display from which you can turn the bike on using a PIN, revealing a speedometer, odometer, ride and brake modes, and of course, a battery indicator.

It also has a swappable 2.6 kWh, 18,650 cell lithium-ion battery, which can achieve an 80% recharge in two hours from a regular plug point, or a full charge in three hours. The belt is a PolyChain GT Carbon 11m with the rear sprocket consisting of 108 teeth and the front one, 18.

Now for the main event. I swung myself onto the bike and could feel that it was a tad high for 5’9″ me at a 35.75″ clearance, but I was told the suspension goes down by a good 8 inches during riding. I flicked through the ride settings: Explore mode limits your top speed to 45 km/h, but you will have two to three hours of battery. Excite mode is geared for enduro or active trail riding and will give you between one to two hours of riding time, depending on how much you’re thrashing it. Excel mode will allow you to twist the throttle all the way at 56 mph for around an hour.

There were no trails and I was not here to ‘Explore,’ so I set it to ‘Excel.’ There were also three modes for regenerative braking: Freewheel mode where there is none (like an old school dirt bike); two-stroke (moderate braking); and four-stroke (maximum braking). I chose the latter and I was off.

I remember being so confused when I first heard about how a roughly $125K Tesla model S repeatedly out-sprinted an eight-liter, 1,500 hp $2 million Bugatti Veyron in a drag race. That concept of almost infinite torque that an electric motor can provide has to be tasted in person to fully understand it.

Review: The Urtopia Carbon E-Bike is a work of art that you can ride

On a motorcycle, the big difference is that you’re up front and personal with the elements. I twisted hard and the electric motor gave me a high-pitched whine, rocketing the bike forward in warp-speed. The Ewoks would have approved.

I’m nervous about bikes that are light since they tend to get thrown off bumps and cracks easily. So I’m surprised that the Kalk&, a wisp of a bike at 174 lbs with narrow tires, handles the pot holes and deep cracks at high speed with aplomb, thanks to the velvety Brembo suspension. I kept flicking the throttle to max and decelerate between lights, and I marveled at the nimbleness of this motorcycle as it danced in and out of lanes.

On the way back, I stood on the pegs and launched myself off as many speed bumps as possible and caught some air. Apparently, other Kalk& riders have subjected the bike to all kinds of acrobatics including wheelies (incredibly easy on this bike), fishtails, and other acts of potentially bone-crushing fun that are not so easy on most motorcycles.

Low weight and seemingly unlimited torque is destined to produce mischief. Visions of calling my wife and kids about my broken spine when I was supposed to cook the evening’s dinner ensured that I would be ignoring that call of the wild for now.

The Kalk may be Cake’s urban showboat, but the Osa is potentially the lifestyle draw. The singular feature of the Osa is the unmistakeable ‘unibeam’ that runs all along the bike. It is here that Cake reveals its all-encompassing vision for its fleet. While the Kalk& gives you the thrills and chills of a dirt bike that is perfect for urban commuting and some moderate off-road mucking around, the Osa is all business.

It is fashioned into a classic Swedish, industrial modular machine designed to haul things like 2x4s or a surfboard that can be clipped to its beam with metal hooks along with — as absurd as this may sound — your chopsaw strapped to the large, rear carrier basket from where it can jack into the battery and start cutting.

The Osa Plus may look like a staid moped. But when you twist that accelerator, it feels nothing like one thanks to the same torrid torque of an electric motor. The Osa Plus has the same 56 mph top speed but is a little heavier than the Kalk& at 215 pounds and sports less torque at 151 Nm (it has some other minor differences). With smaller 14″ wheels and a low riding position, the Osa Plus feels secure and well planted as it flies over the road’s many bumps and bruises. It’s also surprisingly agile.

Review: The Charge Comfort 2 e-bike is a smooth ride that fits in tight spaces

Cake’s motorcycles are possibly the most intriguing entrants into this nascent market — but the most difficult to categorize. For owners, they can be economic no-brainers, as electric motors have negligible operating costs and few moving parts, which makes for very little maintenance.

But a motorcycle is not a Tesla sedan. Owners ride for pleasure not for work in North America and almost always have a car as well. Will hobbyists embrace the electric shift if they don’t really need to? Why sacrifice the deep, satisfying rumble of a Harley’s V twin with a sound right out of Aliens?

Yet, Cake is addressing this existential dilemma by completely subverting expectations of what a motorcycle should be. You can ride a Cake bike as a hobby, for work, or for your commute, or for a trip to the beach. It seems the only thing you cannot do is to have your Cake and eat it too.

Review: Zectron e-bike first look: A week-long ride with a lot of potential

Of course, it costs $14,860, which is not at all cheap. You can easily get three 125cc dirt bikes, a Ducati Monster, or a beautifully restored vintage Triumph Bonneville for that price. You can’t even ride the Cake on a highway, a common complaint.

Then, there’s Zero FXE, the electric motorcycle brand that’s been around the longest and whose bikes are well under $12,000 and fantastic fun. Or the ridiculously underpriced Sondors Metacycle, which seems like a bargain urban commuter at $6,500.
But none of them offer the utilitarian vision, large range of models, plug-and-play accessories, top-notch materials, and iconic Swedish styling.

Cake’s bikes are a lot of fun to ride, easy to learn for a novice, and a great option for those looking to upgrade from an electric bicycle or moped. If you have the money and are thinking of buying an electric motorcycle for your commute or your work or perhaps the trails, I highly recommend you take one of Cake’s offerings for a spin to see what it is all about. The memories they make may not include a signature thump, but they are incredibly fun and capable of generating different but equally resonant memories.

‘Round and round we go…’: NASA tweets with mesmerising pic of Whirlpool Galaxy