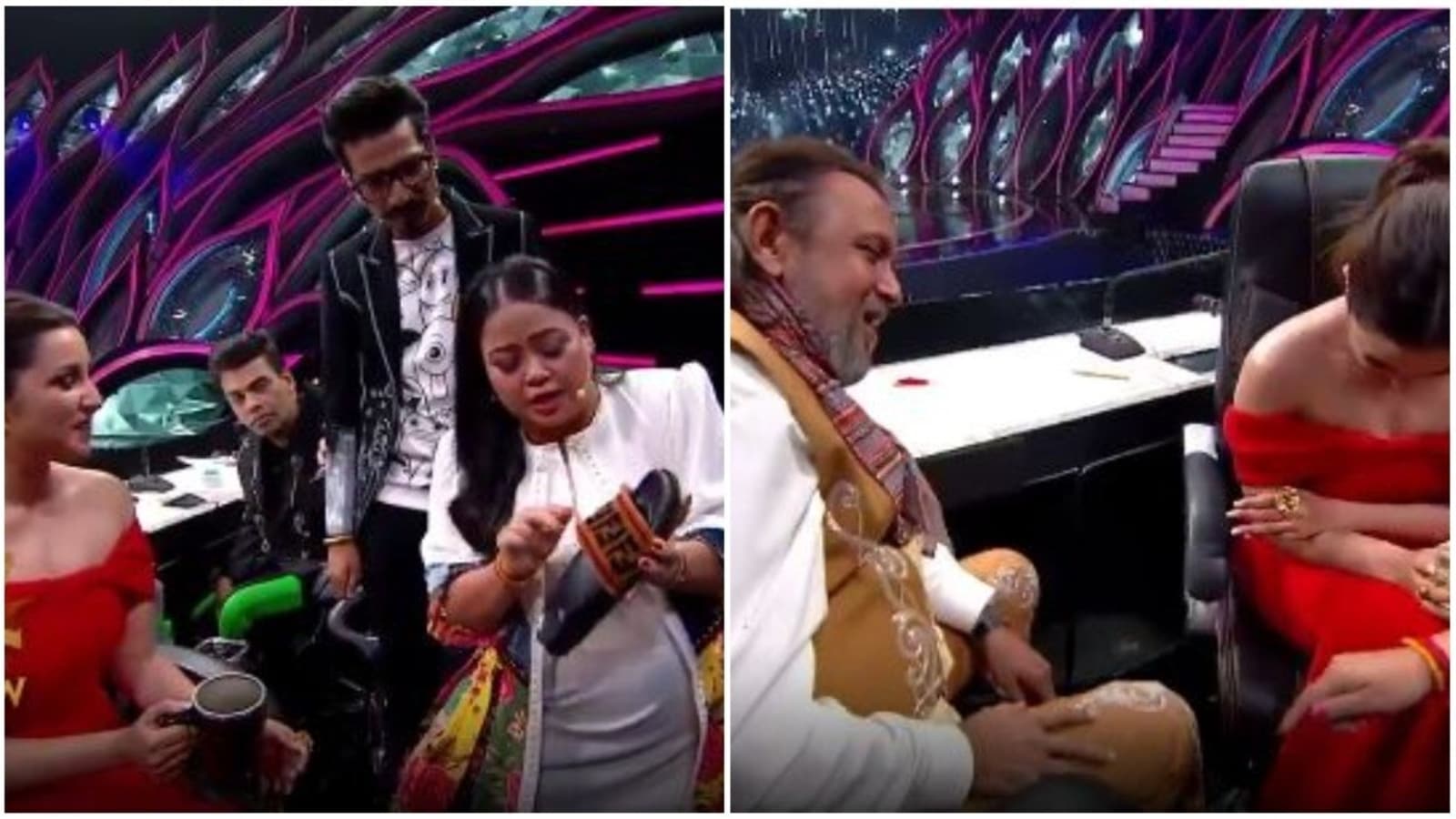 Bharti Singh and Haarsh Limbachiyaa, real-life couple and host of Hunarbaaz, teased judges Mithun Chakraborty and Parineeti Chopra on the sets of the talent show. In a video shared by ColorsTV on Instagram, Bharti and Haarsh said that they would reveal what the judges do during a break on the show.

In the video, Bharti Singh and Haarsh walked towards the judges’ panel. She said, “Look at Mithun Chakraborty. He’s picking out the biscuit, from between his teeth, that he had eaten earlier. This is a hard-working guy who doesn’t want to let go of his stuff.” The camera panned towards Mithun, who was busy picking his teeth.

Next, Bharti went to Parineeti who was dressed in a red off-shoulder dress. Bharti said, “This is our Pari who is wearing a fish cut dress worth lakhs. Oo my God.” She then touched Parineeti collar bones and complimented them as the actor laughed.

Bharti then took off Parineeti’s sandals and started joking that she bought them from Mumbai’s Jogeshwari railway station. Bharti said, “This is the same sandal for which this girl was fighting at Jogeshwari station.” She also said that the sandal was worth ₹70 at which Parineeti burst out laughing.

Bharti continued, “She tore the strap, went home and replaced it with a piece of blanket. And now she says ‘This is a branded chappal (slippers)’.” As Parineeti said, “Karan Johar will tell you how costly this sandal is”, Karan replied, “You get this in Linking Road.” Parineeti screamed on hearing this.

Next, Bharti picked out Parineeti’s heels and said, “I don’t understand if this is for wearing or picking out chicken from between your teeth. I’ve never seen such thin heels in my life.”

Karan took the shoe from Bharti and asked her to repeat the brand’s name which was Christian Louboutin. As Karan tried to teach Bharti the correct name of the brand, the comedian kept on giving it a funny twist.

Bharti next asked Parineeti where she went recently to which she replied Prague. To this Bharti responded, “Nearby Karjat?” Parineeti said, “Absolutely. It (Prague) comes next to Karjat.”

As Karan complimented Bharti’s shoes, Haarsh said that it was from Lokhandwala. Karan asked her if grooms are available there to which Bharti said, “First copy milegi, kadak. (You’ll get the first copy).” Karan said that their mission was to send Parineeti from Hunarbaaz set directly to Lokhandwala.

Bharti then teased Mithun that he has been to Lokhandwala several times. “Dada (Mithun) isn’t it so? This pant-shirt have been stitched from the sarees you bought from there.” Bharti pointed at Mithun’s brown outfit which had white embroidery. “This was my mother’s choice but he first claimed it. He snatched the saree from my mother,” joked Bharti.

McDonald’s got one important thing very right (Chick-fil-A, not so much)