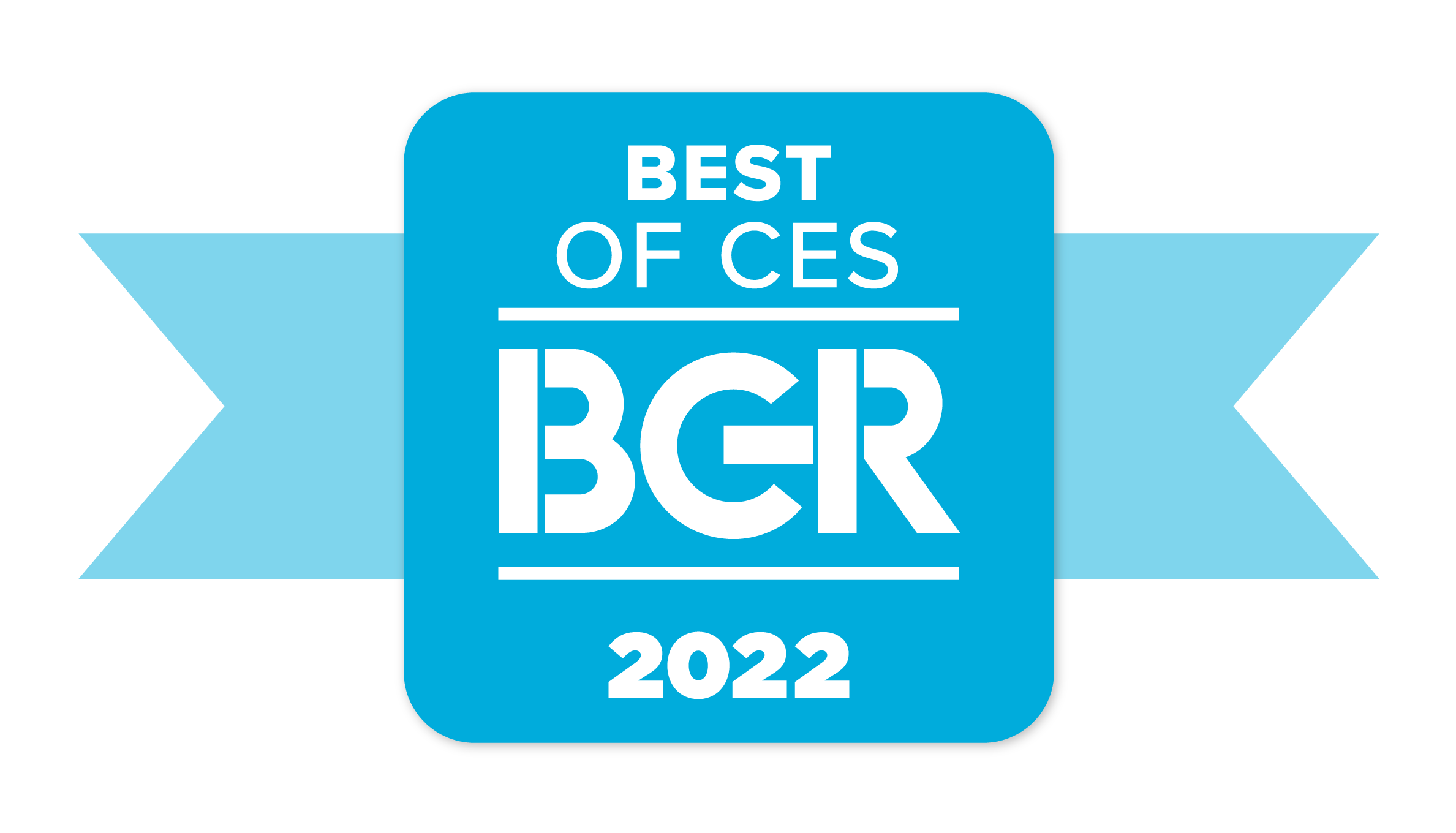 CES 2022 has come and gone. The event was perhaps the weirdest CES in modern times, due to the ongoing pandemic that caused many large companies to pull out of the event, and in turn, many attendees to cancel their attendance. But the show itself still went on, and we got some awesome new tech in all kinds of different categories.

Of course, there were also plenty of not great products at CES 2022. Interested in cutting through the junk? Here are the best new releases from CES 2022.

At CES 2022, we saw a huge number of incredible TVs, that both push TV technology forward, and bring high-end home theater equipment to a lower price point. Here are the best TVs at CES 2022.

Perhaps the headline TV of the show was the new Sony A95K. Why? Well, because the new TV is the first to offer a quantum dot OLED display (typically referred to as QD-OLED), meaning that it should offer the best of LED and OLED TVs. QD-OLED TVs only offer blue OLED compounds. Other colors are created with a quantum dot layer on top of the OLED layer. The result is a TV that offers true black levels, with vibrant colors and a generally brighter image. The display panel is actually developed by Samsung Display (technically a separate entity from Samsung Electronics) — however while it was rumored that Samsung might introduce a QD-OLED at CES 2022, that turned out to be false.

The Sony A95K series will go on sale later this year, and you can expect to pay an arm and a leg for them.

LG is making OLED TVs a little easier to fit into small rooms. The company announced its smallest OLED TV to date at CES 2022 — the 42-inch LG C2 OLED. This TV offers all the advantages of an OLED TV, like the super-deep black levels and high amounts of contrast, without the larger size.

If you do want a larger size, however, perhaps you want the largest size. The company also unveiled its largest OLED so far — the 97-inch LG G2 OLED. This TV is perfect for the largest of large rooms — though don’t expect it to be cheap.

We don’t yet know pricing for either of these new TVs, however, we’re likely to find that out soon.

So far we’ve really only covered the extremes — the biggest, best, and most expensive. But if you want a solid TV at an affordable price, Hisense has an excellent new option, called the Hisense U8H. There are a few things that make this a great TV. For starters, it’s got a Mini-LED panel, which means that it should offer deep black levels, while still retaining the brightness and vibrancy you would expect from a traditional LED. Even better is the price — the Hisense U8H starts at $1,099 for the 55-inch model. It also comes in 65 and 75-inch models, and will be available in the Summer.

Eve pulled out of actually attending CES, but the company did still unveil a new security camera as part of the CES event. The Eve Cam Outdoor is a HomeKit Secure Video-enabled outdoor camera that’s aimed at offering a solid image quality, night vision, and a floodlight — all within Apple’s private and secure ecosystem. The Eve Cam Outdoor will be available starting on April 5, for $249.99.

Robots are coming to the home, and they may be here sooner than you think. The Labrador Retriever Bot is built for those with chronic pain or other issues that prevent them from being able to move easily around the home. It works through a touch screen or mobile app, and lets the user have items delivered to them at specific times during the day. The system can guide itself through the home using a propriety navigation system.

Homey is on a mission to bring all of your smart home devices together. The company has come up with the new Homey Bridge, which is built to work with all of your favorite smart home systems, and control them within one app. The system is cloud-based (so it won’t work if the internet goes down), but it offers excellent automation control, and is billing itself as a privacy-first system.

The Homey Bridge will be available in February for $69, and offsets that low cost with a subscription fee of $2.99 per month for any home with five or more devices.

TP-Link’s Kasa brand has long been a go-to in the smart home world. But the company is back with a new brand in the space — TP-Link Tapo. The new Tapo brand offers devices like switches, bulbs, and cameras, plus it supports HomeKit and other smart home ecosystems. Unfortunately, Tapo won’t work very well with the TP-Link Kasa devices that you already own, and you’ll have to download a new app. But, TP-Link says it’s exploring ways to allow them to work together in the future.

Looking for a new watch or fitness tracker? Wearables seemed to take a bit of a back seat at CES 2022, but there were still some solid wearable devices on offer. Here are the best of them.

The Garmin Venu 2 may be relatively new, but the company has already launched the Venu 2 Plus. The Garmin Venu 2 Plus adds two key hardware features — a speaker and a microphone. These allow you to make calls and use your phone’s digital assistant straight from your wrist. You’ll also get all the features available in the original Venu 2, like fitness tracking, notifications, sleep tracking, and more.

Like the idea of the Fossil Gen 6 smartwatch but want something a little more…classic? The Skagen Folster Gen 6 takes the Fossil Gen 6 platform, and slaps it in a more stylish box. That’s to say, you’ll still get the Qualcomm Snapdragon Wear 4100+, along with a 1.28-inch AMOLED display, and 8GB of internal storage. The device is able to track things like heart rate and blood oxygen, and is available with a number of different band styles.

The Skagen Falster Gen 6 will be available later in the month for $295.

Laptops were front and center at the show, and we saw some powerful, sleek, and downright wacky laptop designs. Here are the best of those laptop designs from CES 2022.

Dell is making its most stylish laptop even sleeker. The Dell XPS 13 Plus gives the XPS 13 a flat keyboard bed, takes away the marked trackpad, and adds capacitive function keys. Ports may be limited, but the general design of the laptop is incredibly sleek and stylish. The laptop has yet to ship to the public, but it will in the spring. Pricing has yet to be revealed for the Dell XPS 13 Plus.

Lenovo launched a slightly new take on the laptop at CES 2022. The Lenovo ThinkBook Plus Gen 3 is a 17-inch laptop with one thing that sets it apart from the rest — an 8-inch touch display that sits next to the keyboard. That touch screen can be used to mirror your Motorola phone, or show more content from the laptop itself.

It’s a neat idea, though certainly not one everyone will be able to make use of. The Lenovo ThinkBook Plus Gen 3 will be available to the public starting in May for $1,399 for the base model.

Foldables have been all the rage in the mobile world, but they may be coming to computers too. The Asus Zenbook Fold 17 is an example of this. The device is basically a huge 17-inch foldable tablet, that can display a keyboard on the bottom half when semi-folded — or you can use the device with an external Bluetooth keyboard. It can offer up to 16GB of internal memory, with 12th-generation Intel processors, and integrated graphics.

The Asus Zenbook Fold 17 doesn’t have a specific price or release date yet, but Asus says it’s aiming to release the device around Computex in May.

Car tech is huge this year. With EVs getting increasingly popular, we saw a number of awesome electric cars at CES 2022. Here are the best of them.

Perhaps the most interesting new car is the Sony Vision-S 02. Not because of the car itself, but more because of what it represents. At its press conference, Sony not only announced its second EV concept, but it also announced that it was exploring the possibility of releasing electric cars to the public, through the newly established Sony Mobility Inc. We’ll have to wait and see if the original Sony Vision concepts end up getting a release, or if the final models are a little different — but either way, it will be interesting to see how and when Sony will officially enter the EV space.

Electric cars are relatively popular, but they still have yet to seriously enter the mainstream. Chevrolet, however, thinks it can do so in the U.S., with the launch of the new Chevrolet Equinox EV. The Equinox EV is relatively well-designed and starts at a relatively low price of around $30,000. That makes it one of the cheaper electric cars to date, bringing the tech into the mainstream. According to Chevrolet, the Equinox EV will be released to the public in fall 2023.

BMW may not have released a new car at CES, but it did show off a way to make cars a little more customizable. The company showed off an e-ink technology that allows users to change the actual color of the car. The tech is currently grayscale, but lets users change the car’s color and even create new designs.

Unfortunately, this tech probably won’t be available any time soon. BMW describes it as an “advanced research and design project,” so it may never see the light of day in a consumer car. Still, it was incredibly cool to look at.

Chrysler had a concept of its own, though this one is a little more likely to be released to the public at some point. The Chrysler Airflow concept is an electric vehicle that boasts up to an impressive 400 miles of range, along with level 3 autonomous driving capabilities.

It may be some time before we see a car like this on the road. Chrysler says it will release its first EV by 2025 — putting it firmly behind much of the competition. Still, better late than never — and we’re looking forward to checking out the Chrysler Airflow in person.

There were a few cool innovations that didn’t quite fit into the above categories, but were still worth mentioning. Here are the best other innovations from CES 2022.

You wouldn’t necessarily expect John Deere to be a big player at CES, but the company had some very interesting announcements at the event. In fact, it announced a self-driving tractor. The tractor has to be driven to a field. But, it can then till a field all on its own, potentially saving farmers countless hours. It’s a super smart application of self-driving tech.

The Samsung Odyssey Ark is perhaps the coolest computer monitor to launch at CES. It’s huge, curved, and extremely impressive. The monitor is 55 inches, with a 16:9 aspect ratio, and it can be turned on its side depending on what you want to use it for.

There’s still plenty we don’t know about the Oddysey Ark though — like how much it’ll cost, and exactly when it will be released to the public. Samsung has said, however, that it’s planning on releasing the monitor in the second half of 2022.

Satechi’s latest accessories may not be groundbreaking, but like its offering before this, they are well-designed and highly functional. At CES 2022, Satechi launched a number of new accessories, including a headphone stand with a wireless charging, a USB 4 adapter, and a USB hub that is built to plug into two of the MacBook Pro’s ports.