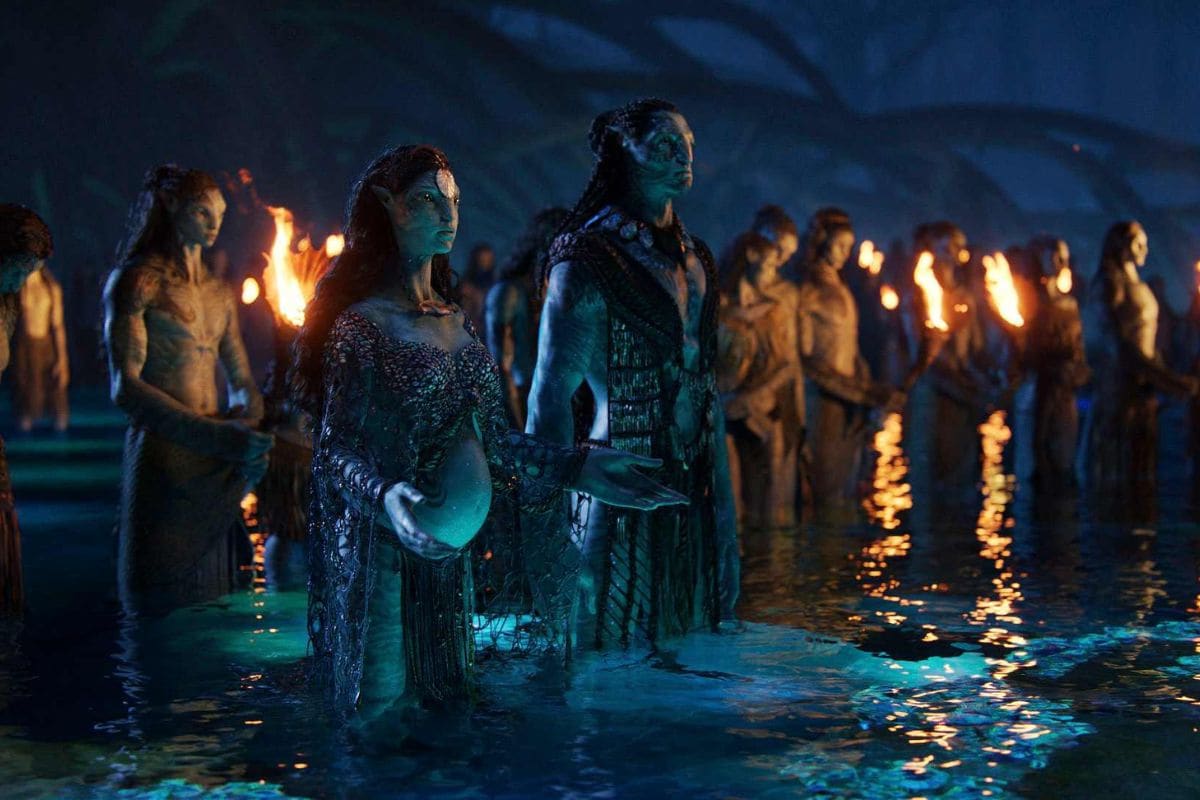 Avatar: The Way of Water is finally complete, after six long years. Avatar 2 producer Jon Landau, who also worked on the original 2009 film, confirmed via Twitter that the “final mix and mastering” for the sequel had just been accomplished. The post-production completion comes merely three weeks ahead of the second Avatar film’s global release on December 16, including in China. Oscar-winning filmmaker Guillermo del Toro (The Shape of Water) reacted to the news, calling Avatar 2 a “staggering achievement” that is “choke-full of majestic vistas and emotions.” It’s clear the director is among the first to see the film, which also makes this the first official review for Avatar: The Way of Water. If you can call it that.

In addition to Avatar, Landau also collaborated with director James Cameron on 1997’s Titanic, both of which went on to become the highest-grossing films of all time. Released 13 years ago, Avatar broke new ground in Hollywood with its stunning VFX, welcoming audiences to the immersive world of Pandora. The film grossed $2.9 billion (about Rs. 23,600 crore) — with the recent re-release — and won three Academy Awards for Best Art Direction, Best Visual Effects, and Best Cinematography. Evidently, its sequel Avatar: The Way of Water has a lot to live up to, with even Cameron raising concerns regarding profit.

A staggering achievement- AVATAR TWOW is chokefull of majestic Vistas and emotions at an epic, epic scale. A master at thepeak of his powers… https://t.co/tG6I16JlhM

Speaking to GQ Magazine, earlier this week, he noted that the film was very expensive to make and that it represented “the worst business case in movie history.” In order for it to be profitable, he said, “you have to be the third or fourth highest-grossing film in history. That’s your threshold. That’s your break even.” The director also confirmed previously that he was prepared to end the Avatar franchise with a trilogy, in case The Way of Water underperforms. Filming for Avatar 3 — reportedly subtitled The Seed Bearer — finished with the main cast in November 2018. In an interview with Variety, producer Landau noted that the first act of Avatar 4 had already been shot as well.

Advance ticket bookings for Cameron’s hotly-anticipated sequel went live in India, earlier this week, across BookMyShow and Paytm and the official websites of major cinemas. Disney-owned 20th Century Studios also claims that Avatar: The Way of Water will witness 24 hours of shows running at select theatres, with first showings starting at 12am midnight onwards. The studio also dropped a final Avatar 2 trailer ahead of release, which saw Jake Sully’s (Sam Worthington) family forming an alliance with the coastal Metkayina clan, and connecting with the waterborne beings, for traversal.

Avatar: The Way of Water releases December 16 in theatres worldwide. In India, the film gets additional dubs in Hindi, Kannada, Malayalam, Tamil, and Telugu.

Peaky Blinders, The Umbrella Academy, and More on Netflix in June