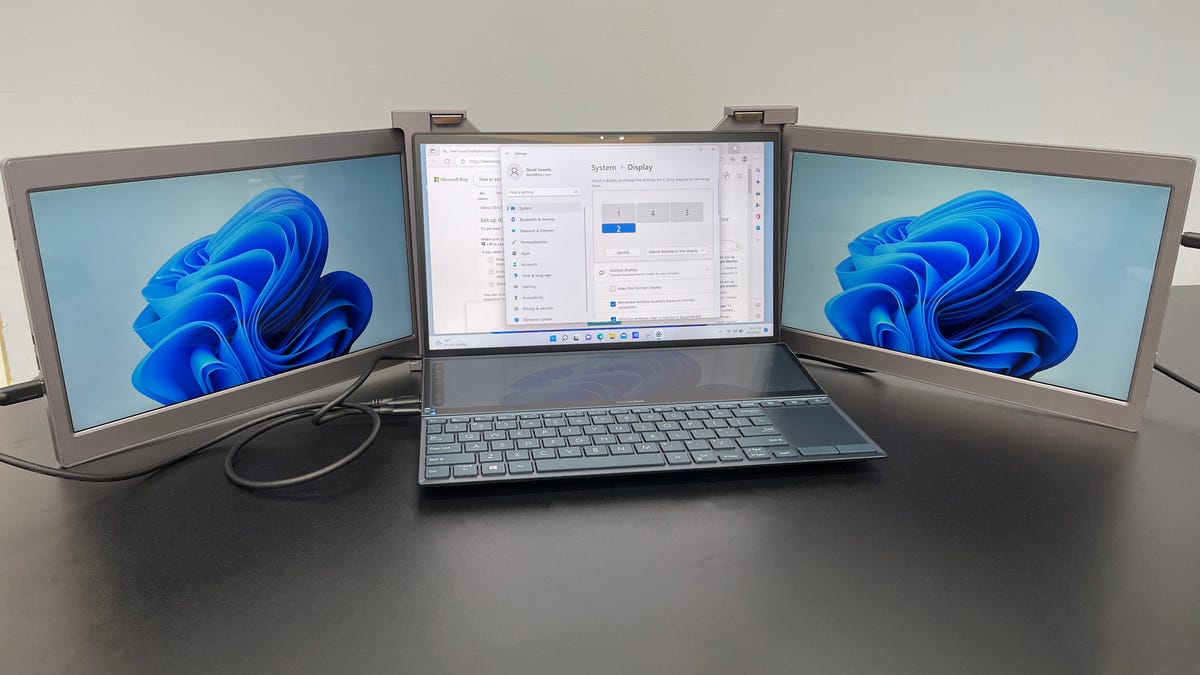 In this article, we’re taking a look at four (really, technically, five) super-light external LCD monitors. While all of them support mini-HDMI connections, their true claim to fame is that they can connect to a laptop and be powered by a single USB-C cable.

Also: How to choose the right monitor layout

These are monitors you can pack in your laptop bag with your laptop and use on the road. They also make very light additional monitors that you can use in your office. I have two of them on iPad arms next to my desk, and they provide very convenient added screen real estate.

But my favorite use for any of these super-light monitors is as a test rig. I regularly test computers and other devices with USB-C or HDMI output, and it’s inconvenient to lug a big screen around to wherever I’m working. But picking up a monitor that weights less than a pound and a half means it’s incredibly portable and easy to use for testing, repair, and systems configuration.

No matter what your usage model is for these little devices, they’re incredibly versatile and — at least for one of them, the Lepow shown below — can be purchased for less than $150.

So with that, let’s dig into our shootout. Oh, actually, one note before we get started: all of these monitors have built-in speakers, but they’re barely meh at best. Nearly every laptop will have far better speakers.

Twice the screens, twice the fun

The $500-ish FOPO S16 really does double up the value proposition offered by this category of super-light monitors. It consists of two 13.3 inch monitors on a special frame designed to fit right on the laptop’s lid so that they nicely flank the laptop’s own screen.

My first thought was that this was a completely bonkers idea, but it’s actually way cooler than I expected. It’s definitely something I can recommend if you’re in need of screen real estate, whether away from your office or back home.

My example of that need was the two months I lived out of my suitcase due to Hurricane Irma. Back in 2017, my wife and I lived in Florida. News reports indicated a Category 5 hurricane was going to make landfall pretty much on top of our house. We evacuated, eventually traveled all across the country, and — this being one too many hurricane panics to put up with anymore — decided to settle as far away as possible, in Oregon.

Also: How to get the triple-monitor laptop setup of your dreams

During the trip across country, we drove during the day. I set up camp in whatever hotel we landed in and worked well into the night. Many of my projects were client driven, and needed access to a ton of information. I needed multiple screens. The way I did it then was to use my laptop and an iPad screen.

It would have been so much better if this FOPO S16 had been available, because it provides two full screens that fold down flat for travel. When you need those extra screens, you really need them. Just keep in mind that when you do fold these screens to their flat format, one screen is facing out. You’ll want to pack this away carefully so it doesn’t get scratched when traveling.

The FOPO S16 offers 1920×1080 resolution (1080p), an IPS screen, and a 178° viewing angle. As you can see in the following picture, I have this hooked up to my Asus Zenbook Duo UX482, which already has a second horizontal screen. Check out the System > Display panel. The laptop now has a total of four screens! How cool is that?

There is an interesting limitation to this product. The company claims it doesn’t work with M1 Macs:

I, of course, took this as a challenge. It is understandable that the company claimed this. Early M1 laptops, like my M1 MacBook Air, came with only two USB-C/Thunderbolt ports. Since each of the two external monitors requires its own USB-C cable to the laptop, that wouldn’t have left any room for the laptop to charge. Also, those early M1s only supported one external monitor.

Also: If you use an external display with your Mac, you need to check out this free utility

As it turns out, if you connect one of the FOPO’s monitors to the M1 MacBook Air, it works just fine. Two, of course, won’t work because no two monitors can connect to that MacBook Air.

My Mac Studio, on the other hand, supports up to five displays. I didn’t take a picture of it, but both displays of the FOPO S16 work just fine with the M1 Max processor in the Mac Studio. Given that the new M1 Pro and M1 Max-based MacBook Pros also support up to five displays (including the one built into the unit), there should be no reason the FOPO S16 wouldn’t work with those M1 devices as well.

Also: How to easily add a second Thunderbolt monitor to your M1 Mac Mini

So, don’t believe everything you read.

Let’s move on to our next display, the INNOCN 15K1F, a 15.6-inch OLED display. At $249-$349 (depending on the day), it is a bit pricey compared to some other super-light external displays. But of the four displays I’ve tested, this unit has a noticeably better picture quality. It’s just gorgeous.

Unfortunately, it doesn’t have much in the way of glare protection, which is why it’s showing the ceiling lights so prominently in this shot.

This display is also super-thin, with a completely plain, flat back.

This display comes with a pouch that’s intended to hold and protect the unit.

When you open the pouch up on its own, it seems flimsy. It looks like there is no possible way it would support the display once set up, but it turns out that the origami-style display folds and locks with magnets, producing a surprisingly robust stand.

What I really like about this unit is that the stand, case, and display itself all fold down into a very svelte, self-contained unit that’s super easy to pack away in a laptop bag for traveling.

Inexpensive, with a kickstand

Of this entire series of super-light external monitors, I think the 15.6-inch LEPOW C2 is my favorite. It’s the combination of a built-in kickstand and its $129 price that make it a no-brainer choice.

Admittedly, video quality of its 60Hz IPS screen isn’t quite as standout as the INNOCN, but it’s also half the price. Unlike the other two side monitors shown in this article, it doesn’t require some sort of case or stand. It’s all built in, and just does its job. Plus, the stand’s angle has some adjustability to it, and it folds down nicely for storage or stowage.

If I have any complaint, it’s that it’s a little difficult to plug cables into the recessed cable ports when the stand is closed. But when the stand is open, this is also the only monitor that doesn’t have an extra inch-and-a-half of cable connector sticking out from the side and getting in the way.

Also: Even M1 Mac owners can have three displays with this Ugreen docking station

Overall, the LEPOW C2 is a very well-considered design that does a lot very smartly.

This isn’t the external monitor you’re looking for

I’m including the AUZAI ME16Z01 out of some kind of completionist urge. You can’t buy this anymore, and that’s probably good. But before the other monitors arrived to review, I used this for almost a year as my testing monitor.

When it was available, it sold for a little under $200. When I first got it, it came with a wrap-around case that was also supposed to serve as a stand, but never worked. Instead, I used one of the multi-angle mini phone stands I have around for such purposes. The one in the picture is from Anker back in the day, but a bunch of brands make identical stands, all for about ten bucks or less.

The real failing of the AUZAI (besides its weight), and probably the reason it’s no longer on the market, was because it always started up super dim. You had to fiddle with the switch on the side to get it into brightness mode, and then keep pressing another switch on the side until the screen was bright enough to see. And you had to do this every. Single. Time. You. Used. The. Screen.

This is where reading Amazon reviews can serve you well. There are numerous reviews of this product complaining about the brightness issue. While a few users claim they overcame it, my experience matched that of the users who saw it as a severe limitation of the product.

Also: How to set your Mac screen to dark mode

My advice, especially when choosing a new product, is to not only read reviews by professional reviewers, but to dig through the comments on sites like Amazon and Newegg.

Sure, some of the reviews are fake plants by the vendors, and some are the usual “this product is s#@!” because it doesn’t meet some specific arbitrary and unreasonable demand of some guy named George, but if you read reviews with care, you’ll develop a pretty decent picture of whether the product has a critical flaw or not. In this case, the reviews definitely disliked the dark screen problem.

Ignoring the off-the-market AUZAI, we have three choices: the $500-ish FOPO dual unit, the $250-ish INNOCN unit, and the $129-ish LEPOW unit. If I were buying, here’s how I’d make my decision.

If you’re traveling and you need a lot of screen real-estate, get the FOPO dual unit. But you better need a whole lot of screen space. You could also get this if you’re working from your home or office, want to integrate a few small screens into a tiny space, and mostly fold them up when you’re done.

For someone who has very little at-home desk space (like in the corner of a kitchen or bedroom) but needs a lot of screen space, the FOPO might also be a great choice.

If you’re traveling or commuting and don’t need the dual monitor rig, then I’d recommend the INNOCN. It folds really flat, is very easy to stow in a bag, and unfolds in such a way that the case is a very solid stand. It’s a bit more expensive, but it’s clearly the most conveniently portable of the lot.

If you’re moving the monitor around a lot at home or at work, or using it as a test rig to set up or diagnose machines, I’d unreservedly recommend the LEPOW. It’s probably the one I’d actually buy had I not received all these mini-monitors for review. It’s inexpensive, well-designed, and has that built-in kickstand. What’s not to like?

What about you? Which of these super-light monitors appeals to you? Are you likely to buy a double-wide like the FOPO? How would you use a super-light monitor? Do you identify with my suggestion to use them as test rigs? Let us know in the comments below.

Man showers cat with kisses, kitty stops him and does this. Watch

Is the pressure of TRPs not letting TV show makers to experiment with new content?