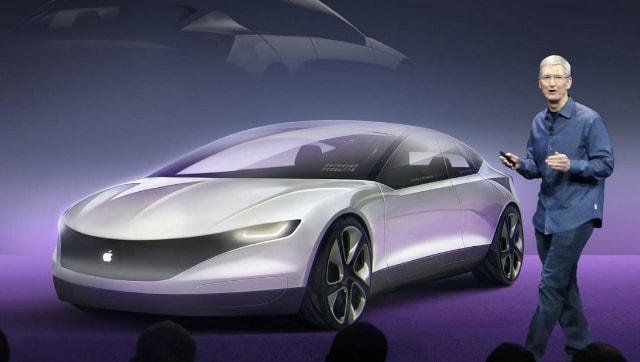 Apple will be launching their first car in 2026. The car will cost about $100,000, use specially designed Apple silicon and will not have full self-driving features. Image Credit: AFP

A report has surfaced that suggests Apple will be ready with their car by 2026. The car will come with Apple’s own silicon and will be priced under $100,000. However, it won’t feature full-self driving capabilities, not at the time of the launch at least.

There have been many twists and turns over the last seven years of Apple Car news and rumours. Back in 2017 after several years of work, it appeared Apple had given up on producing a physical vehicle and was ready to focus on autonomous vehicle software.

However, at the end of 2020, Apple pivoted back to working on producing an actual car powered by its own software. They named the project Project Titan.

Some reports suggested a launch as soon as 2024 while others said it would likely be 2028 or beyond. Rumours swirled that Hyundai and Kia were working to reach a deal to produce the vehicle but that was later scrapped.

The latest on Project Titan is a scaling back of the effort that will skip fully autonomous driving at launch to prioritize getting the vehicle to market. Earlier reports suggested Apple may have been going for a fully autonomous design without a steering wheel or pedals.

“In a significant shift for the project, the company is now planning a less-ambitious design that will include a steering wheel and pedals and only support full autonomous capabilities on highways, said the people, who asked not to be identified because the information is private.”

Apple is apparently still working on finding a partner to purchase an existing electric-vehicle platform instead of developing its own. The company has a number of auto industry veterans working on the project.

“The design of the car is being led by Ulrich Kranz, the ex-chief executive officer of Canoo, as well as former managers from Tesla, Lamborghini and Porsche. The software side of the system is led by former Tesla manager Stuart Bowers, while safety engineering, testing and regulatory matters are handled by ex-Ford Motor Co. executive Desi Ujkashevic,” the report said.