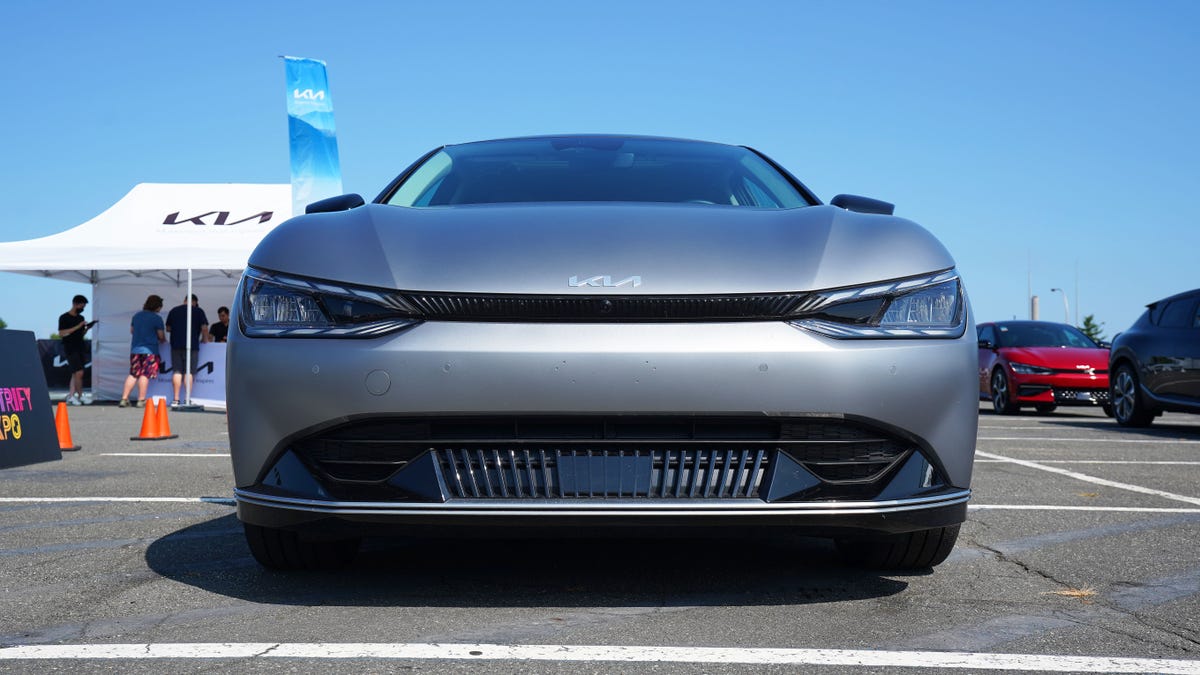 A few weeks ago, I attended Electrify Expo, a local convention where consumers, experienced or not, can test-drive the hottest electric vehicles on the market and put their most burning questions to industry leaders. The two-day event here in New York was stacked with popular auto manufacturers, like Toyota, Kia, and BMW, and some more exotic ones, like Polestar, Lucid, and Aptera.

As an admitted owner of a gas guzzler — and someone who writes for a publication that covers all things technology and innovation — I had a lot to ask. After a weekend of demystifying my preconceived notion of EVs and hitting the road on a couple of market-ready cars myself, here are my key takeaways.

1. Auto manufacturers are being patient with us.

Electric cars may sound like the future — and they very much are — but the ones that are built for modern times remind me more of traditional vehicles than anything else. This balance of innovation and familiarity is rather common, and auto manufacturers have taken drastic measures to reassure gas car owners that the EV experience is not as radical as they may think.

Take Dodge’s new all-electric Charger for example. By integrating fake engine sounds via the car’s external speakers, muscle car enthusiasts who live and die by the growling of exhaust pipes (and can’t stand the silence of EVs) can rejoice and, hopefully, make the jump to clean energy.

Save for the unrelenting belief that one-pedal driving and touch-screen climate controls is the way of the future, most of my first driving experiences with the Kia EV6, Polestar 2, and Volvo XC40 Recharge felt intimate and familiar. The steering wheels may have a little more flare, and gear shifters don’t look as…gear shifty as conventional ones. But once I sat down and began to drive, everything felt like the usual and not as far out as I’d expected. Are automakers simply easing us into a new era of cars?

Also: An electrifying weekend with the Polestar 2

2. Charge times are faster than your phone’s.

Prior to Electrify Expo, I thought that charging — both the speed and accessibility — was a major setback when switching over to an EV. So you could imagine the look on my face when the Kia representative whipped out her one-sheet and read that the EV6 only needed an 18-minute charge to go from 10% to 80%. That’s with any DC fast charger, including the ones provided by the hundreds of Electrify America stations nationwide. My smartphone can’t even charge that quickly.

Then, of course, there’s at-home charging, which delivers the same electron energy at a slower and more controlled pace. So if you’ve heard stories of EVs taking hours to charge, they may just be taking the numbers out of context.

More: The best home EV chargers you can buy

3. ‘Zero to sixty’ is exhilarating, gut-wrenching, and impractical.

At a certain point during my Polestar 2 test drive, I was told to pull over on the side of the road. But instead of asking me for my license and registration, my car guide suggested I stomp on the pedal and let the vehicle fly. And so I did. My head quickly jerked back as the Polestar, with its near-silent acoustics, zipped through the New York City winds. It was a short-lived but exhilarating experience.

Out of all the reasons that I was presented with to “make the switch” that day, flooring the vehicle was much expected and the least convincing. It’s a flashy feature that often makes its way into ads, posters, and marketing campaigns for EVs; how the cars can go from zero to sixty miles per hour in mere seconds.

But in those three-four seconds, as I saw life flash before my eyes, I wondered, “What exactly is the reason for this?” I’m no Formula 1 driver. And I certainly won’t be in one of those Fast & Furious drag races anytime soon. I asked the car guide the same question and was met with a perplexed laugh. He, too, had no idea.

More: I loved driving the Hyundai Ioniq 5 and Kia EV6. There’s only one reason I can’t buy one

4. Electric scooters and bikes are cool, too.

There’s an aspect of EVs that I haven’t touched on yet and that’s the sustainability factor. Nearly every manufacturer in attendance, including that who makes e-scooters and e-bikes, made it clear that going electric helps the environment.

It’s true. By opting for an electric-powered vehicle, you’re effectively reducing greenhouse gas emissions and, subsequently, well-to-wheel emissions. Furthermore, you don’t have to commit to a full-on electric car to better the planet; e-scooters and e-bikes are resourceful alternatives to the standard gas-powered vehicle, too. My current scooter, for example, the NIU KQI 3 Pro, has been very handy for short-distance travel and the occasional morning commute to work.

Also: The $800 Lectric XP Lite e-bike is a sheer joy to ride

As you can probably tell, my general impression of EVs — or, at least the ones that I tested — remains positive. Physically driving the cars certainly helped open my mind up to what’s available when my 2017 Mazda CX-5 is due for an upgrade.

But even if I was ready to make the switch today, my options would be limited.

My ZDNET colleague Jason Perlow did an excellent job explaining how global supply chain issues have affected the current state of EVs in his recent account. To summarize, unless you have months (or up to a year) to spare, expect to pay significantly more than the sticker price for any electric vehicle out right now. If you can find your ideal brand, model, and configuration closer to retail, then it may just be your calling to take the EV leap.

I’m curious, do you own an EV? If not, what’s holding you back? Also, if someone could give me a real-world use case for zero-to-sixty acceleration, I’d love to know what that is. Comment down below.

No experience required: Learn Python and data analysis for only $25 | ZDNet

Cat’s unbothered reaction to being lovingly poked by human is hilarious. Watch