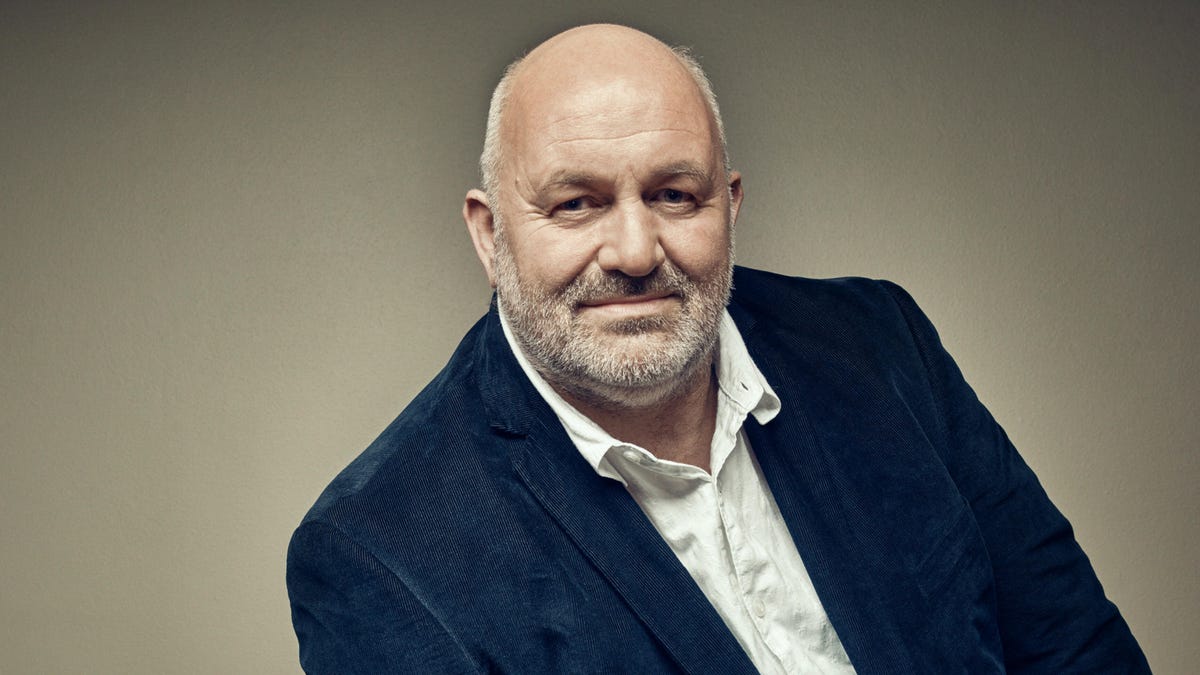 “Cloud is around the corner these days,” said Werner Vogels, Amazon’s chief technologist, in an interview Wednesday with ZDNet via Amazon’s Chime video program.

Vogels, who has been the chief technologist for over 17 years at the cloud giant, was reflecting on how the build-out of cloud computing technology, and particularly Amazon’s AWS, which pioneered the public cloud in 2007, has made cloud computing more deeply enmeshed in all computer use.

The general public, said Vogels, still has a perception that “cloud is a few things that sit out there, somewhere,” he said. “And, maybe in the early days, when we launched the first two regions of AWS, that was the case.”

“But now, there’s 24 regions around the world, 84 availability zones, hundreds of points of presence, pushing things to the edge in 5G access points, up in space — you know, cloud’s getting closer and closer to every individual,” said Vogels, referring to the overall scope of AWS infrastructure.

Cloud is literally around the corner, in the sense that when you’re walking and talking and texting and app’ing, there’s some AWS there.

“If you have your 5G phone, I wouldn’t be surprised if you are accessing AWS services of your carrier — actually running in an AWS access point close to you.

The notion of closer and closer to each person might be best symbolized by AWS’s Local Zones, an option where compute and storage and additional services are deployed close to large population centers.

“Anyone with streaming or gaming who wants to have really low latency toward their customers, they don’t run those access points in the main regions of AWS,” said Vogels, “they run it in the Local Zones to get closer — and that has been a very successful product.”

Indeed, AWS continues to deliver for Amazon as a business. Thursday evening, the company announced another quarter of sharp growth for the service, with revenue rising 33%, year over year, to almost $20 billion. Amazon said it is at a “run rate” of AWS revenue of almost $80 billion over twelve months. The company plans to step up spending this year on infrastructure goods and services to bolster AWS.

Cloud getting closer and closer is already showing up in interesting ways. Take embedded technology in the built surroundings, smart technology and sensors.

“One of the things I am seeing is that the clear distinction between what is digital and what is physical, or what is analog, has disappeared,” said Vogels. “The whole notion of ambient placement of digital sensors and interacting with them, is definitely on the rise.”

That might be obvious regarding digital natives, but Amazon’s Alexa device is something of a break-through, he notes. “One of the things I’m noticing is that the people who are really keen on Alexa, are the elderly,” said Vogels. “If you give them iPads, they may use it for photos from the grandkids, but that’s as far as it goes.

“But if they can talk, this is something they have done for years.” Some older users describe Alexa as “their savior,” he has observed.

There is an instrumental lesson in that, perhaps. In an aging global population, says Vogels, the tension between who needs care, and who can be helped, may to some extent fall back on smart technology to make self-care an important component of healthcare.

“I definitely see a variety of new innovations happening in the space of people doing self care,” said Vogels.

“And one of areas of that which I think are extremely important is elderly care; we’re all getting older.” One challenge for society, he said, are “what kinds of innovations, first of all, to make sure that people can stay home, longer,” in old age, rather than have to go to a facility.

Via sensors and automatic alarms and such, “there’s lots of innovation, especially around elderly care and health care in general, we will see major improvements in convenience,” said Vogels.

Amazon this past week announced the acquisition of 1Life Healthcare, an operator of urgent care clinical facilities. Asked about the connection to pervasive technology, Vogels declined to speculate on a deal underway, and one handled by other staff inside Amazon.

Medicine is a topic near and dear to Vogels, 63, who had an early career in radiology before becoming a technologist. Vogels had been scheduled to keynote Amazon’s NYC AWS Summit earlier this month, but had to passed the baton to Martin Beeby at the last minute — “Martin did an amazing job,” he observed.

Also: Why AWS sent a Snowcone into orbit

Asked what things he would have emphasized had he done the talk, Vogels told ZDNet that he would have liked to have told the audience about the bad old days of radiology archival storage.

“In those days, 40, even 30 years ago, “the cost of digital storage was too much for hospitals to pay,” and so to meet medical records needs, “instead of being able to capture all the MRI data in digital form, they basically printed it on films, and archived like the way that they had always done with X-rays.”

The result of the cumbersome archival systems of film in vaults, said Vogels, is that “when the patient came back, we wouldn’t be able to compare the digital information with each, you would actually look with film.” For the hard-working radiologist, poring over films, “their eyesight was not as good at night as it was a 9 o’clock in the morning,” he noted.

Nowadays, “any help they can get operating on the pure digital data,” such as cloud and Amazon’s S3 storage, suddenly means that studying images becomes much more nimble for them, he said.

In one of the many details of how technological change can shape practice, that greater access to the information in digital form starts to demand AI and ML as an enhancement to what the radiologist does, said Vogels.

“There’s still plenty of people who believe that AI and machine learning will take jobs away,” observed Vogels. “But talking to radiologists, they are very excited about all this.”

With digital, “those comparisons become quite microscopic,” said Vogels, meaning, looking at something such as s tumor. “Your eyes are not good enough for that, but AI and machine learning can discover these kinds of patterns and, sort of, guide a radiologist into areas they should be looking deeper at.

“And so, in essence, they [radiologists] see AI in healthcare as augmentation of themselves, and maybe a chance to get home earlier at night.”

The radiology example is just one instance of how “There is a major shift happening in healthcare because of the ability of machine learning and because we can keep data around,” said Vogels.

“Nowadays, they look to measure, say, growth of tumors at almost the microscopic level versus centimeter,” explained Vogels. “That’s a major shift.” Microscopic differences that can be seen for the first time with machine learning in tumors can be major differences, he said.

“There are certain patterns, especially with MRI scans, where you can already see at microscopic levels, the differences between malignant and benign” tumors, said Vogels. The radiologist still makes the decision, he said, but ML can “surface information” that couldn’t be before.

Other advances include the digitization that is underway of the world’s medical note taking, most of which is still in hand-written form. Getting those records into digital data will allow for AI to sort and sift it all, “where you can have analysis of patterns and cross-sections, is now possible where that wasn’t possible at all even five years ago.”

Techniques for things such as tumor analysis of MRIs will demand innovations in the most advanced forms of AI such as deep learning, said Vogels. “It’s not just plowing through data or just writing a SQL query, and thinking you can get the result out of your data,” he said. “It’s really pattern matching and deep learning,” and “many of these models are still evolving,” meaning the AI models used.

On a more prosaic level, asked where AI is going, Vogels replied that the technology offers the opportunity to bring to most endeavors the kind of innovations that Amazon has had in its retail operations for twenty years now, things such as personalization.

“We’re getting to a point where we can build really useful systems [with machine learning], and within Amazon, we’ve actually been doing this for two decades already.

“f you look at many of the things that Amazon’s going for, recommendations, or personalization, we serve a hundred million different home pages — well, it’s all done based on machine learning techniques.”

“And Amazon retains billions of orders from the past, we know exactly which ones were fraudulent, and we can make models out of that, and when a new order comes in, we know with X percent likelihood this is a fraudulent order.”

Machine learning is beginning to play “an incredibly important role” in code development, he said, citing things such as Amazon’s Code Whisperer technology to “take away the mundane tasks. That might relieve the incredible pressure for coding talent in IT, he noted.

Machine learning will deliver benefits in regulated industries, such as energy, opined Vogels. In liquified propane gas industry in Australia, for example, they are moving to predictive maintenance, he said. Where in past the facilities had alarms on their giant refrigerators only if something went wrong, “They are using newer sensors they to do predictive maintenance, where, instead of running into disasters, they can prevent it.

Manufacturing is set to get a big lift from machine learning. “In the U.S., the typical manufacturing equipment is 26 years old,” he observed. “That’s before machine learning, and so modernizing the manufacturing environments, and using the data that comes from those, for safety and security, and preventive maintenance, there’s many different areas where this can be applied to.”

And what of the deeper question of ethics in AI? “There’s a lot to think about,” said Vogels.

Part of what can be thought about is for those building things to be, in a sense, self-supervising, he implied.

“On the one hand, we should look at technology to be able to do to see what we can do to really get insight into what these models actually are — I even expect regulatory requirements will come down that way.”

At the same time, “ethics is a difficult topic, it’s very societally driven,” he said.

“Some technology that may be very much applicable in one country, whereas in others making use of image recognition or other tools may not be appropriate.”

Vogels offered the example of London being replete with closed-circuit cameras for surveillance. “If you did that in Amsterdam, you would get a revolution,” he observed.

As a “very sensitive topic,” said Vogels, to understand the responsible use of technology means getting to a fundamental fact: “On the one hand, technology can be used for good, and we’ve seen some other cases where technology can support less — not ethical uses.”

“That’s a decision that will be made by regulators in combination with those who make technology.”

Bharti Singh wants son Laksh to work at the age of 16-18: ‘He should be studying, and working at McDonalds’